"People frankly deserved to know what happened and why certain decisions were made and not made," said Joanie Schmidgall with the Willamette National Forest. 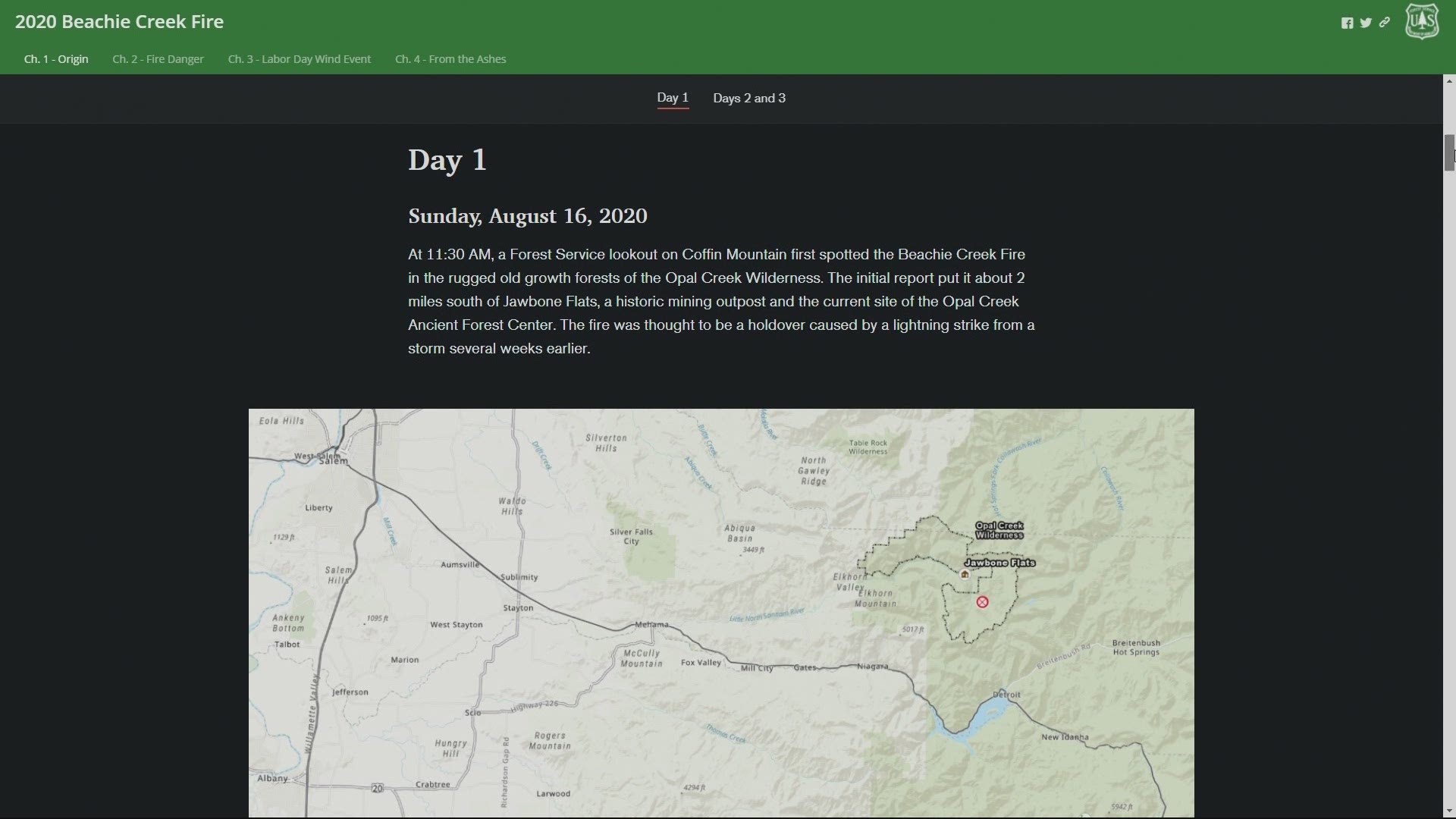 “We have gotten a lot of questions, a lot of requests and we also feel like it’s our duty to tell this story to the public,” said Schmidgall.

“We wanted to give this all-encompassing account of what happened both in the early days of the fire when the fire was detected and just really walk through the initial response with people.”

The website says 486 homes were burned along with 36 non-residential structures, like businesses or commercial properties. Schmidgall said the Beachie Creek Fire was one of the biggest and most destructive fires in Oregon's history.

“People frankly deserved to know what happened and why certain decisions were made and not made,” she said.

The story of the Beachie Creek Fire is told in four chapters on the website and includes information from many sources.

“We went through dispatch records. We went through text messages. I interviewed dozens of people, had people write personal accounts,” said Schmidgall.

The first page of the website begins with the fire’s origin on August 16. It started out at about 10 acres in the Opal Creek Wilderness, east of Salem. It was believed to have been started by lightning.

Schmidgall said right off the bat, fire retardant was requested but it never came because of demand and large fires burning homes elsewhere outside of Oregon.

“So that’s where some of the resources went that we would have liked to have on the Beachie Creek Fire,” Schmidgall said.

According to Schmidgall, around the same time the Beachie Creek Fire broke out, there were fires in northern California and in Colorado that were bigger and more destructive at the time.

“When you have a wilderness fire that’s 10 acres, even though that fire is really remote and locally you know this fire has the potential to be a problem, it’s sometimes hard to make that case to be a priority to receive air support,” said Schmidgall.

Resources to fight fires are shared from state to state. That means if there’s a large fire that requires helicopters or planes carrying retardant, people trying to put out smaller fires elsewhere may be out of luck.

The maps on the website show the fire’s remote location. Despite that, there were attempts to get people to the fire from the air and ground.

“I mean it was a four-hour hike to get to the fire and there was no opportunities for a heli-spot, for jumpers to jump,” said Schmidgall. “This fire was never just monitored. We were always working to try to get access."

She said the fire broke out in an area with old growth trees standing 150-200 feet tall. The issue with such tall trees is that when water is released over the fire, the water bucket has to stay above the trees, limiting the amount of water that has direct contact with the ground. While Schmidgall said water can help cool the fire and slow its growth, firefighting is made much more difficult without crews on the ground to assist.

“When you have the forces on the ground that really helps to turn up that material that’s on the ground. There’s old growth stumps, logs, really, really thick underbrush, and when a fire gets in there and it gets down into the roots of these old growth trees…that’s where you really need the ground forces in order to really combat a fire like this,” said Schmidgall.

The website is intended to give people a better understanding of the fire and the decisions that were made.

“Putting a visual to it will hopefully help people understand why some of those decisions were made,” she said.

The story of the Beachie Creek Fire still isn’t complete. The Forest Service continues to monitor burned areas for spots that could flare up again. They’ve flown infrared flights over fire-affected areas and currently know where pockets of heat still exist.

Recently, a firefighter shot video of a burning snag in the Detroit area. It was left over from the Lionshead Fire and has apparently been smoldering for the last nine months. Schmidgall said they expect similar situations to arise elsewhere, including areas where the Beachie Creek Fire burned.

With the Memorial Day weekend coming up, Schmidgall said she knows some people might be getting frustrated that their favorite campsites aren’t open yet due to large closures still in place.

“We’re hoping this [Beachie Creek Fire] story map helps remind people how destructive these fires were and shows the scale of the destruction, so it gives a little bit of perspective there too.”