Max Poindexter normally builds drones and works in Intel's sort module, but found a good cause in the pandemic helping children with online learning. 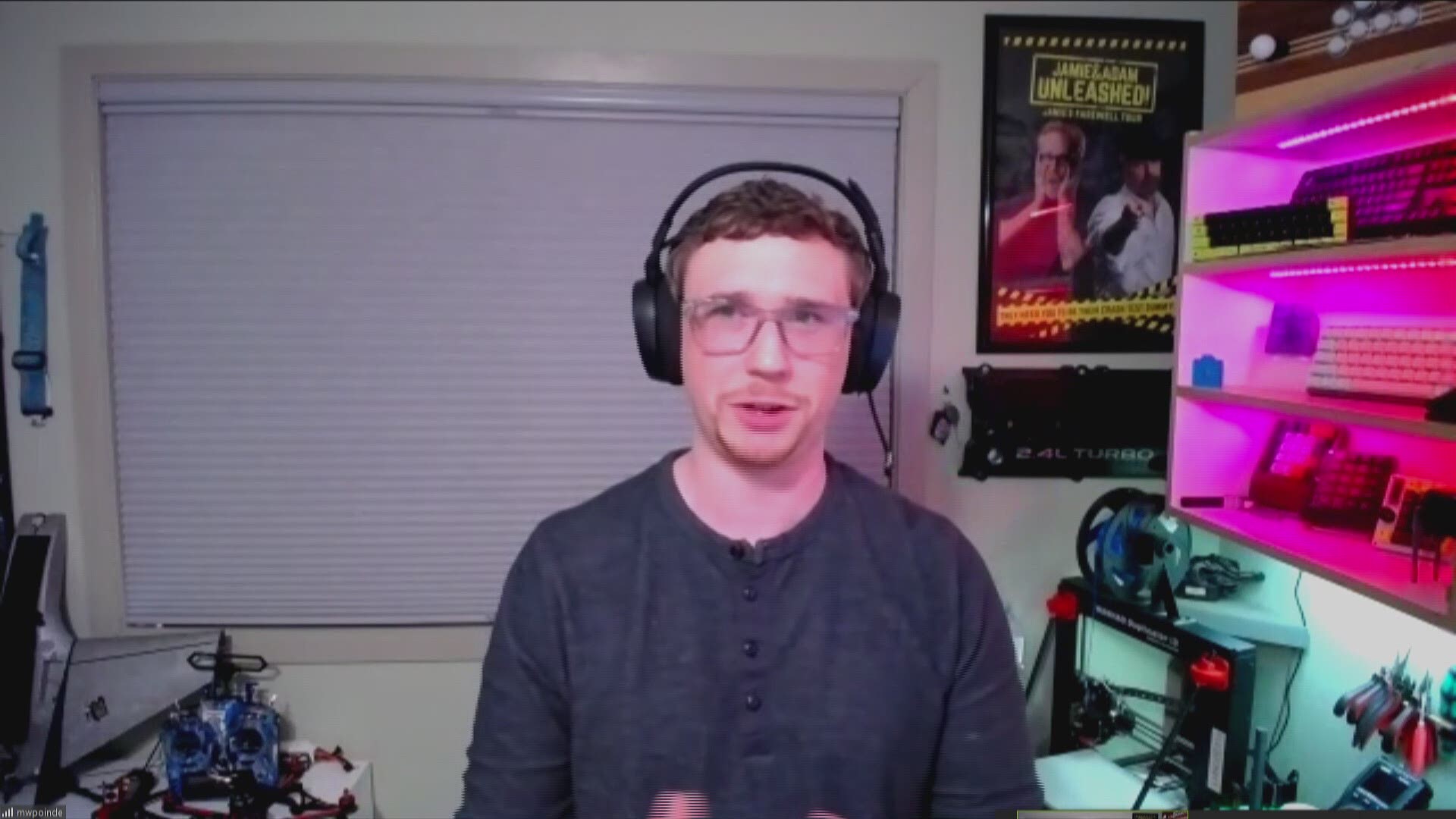 KEIZER, Ore. — Despite the dire hardships of 2020, so many wonderful people have made hard times a little easier for others. One of those people is an technical engineer at Intel in Hillsboro. "I'm kind of a nerd so I have a couple 3D printers in here, and I build drones so I have parts everywhere," laughed Max Poindexter, as he spoke to us from his home office in Keizer.

Poindexter has his fingers on the future working for Intel. When COVID-19 hit, Max and many of his 21,000 co-workers at the Hillsboro campus, started working from home. "I wanted a little bit bigger desk. That's when I started thinking about all this comprehensive distance learning that's happening. I thought there's probably a bunch of kids out there that don't have desks."

An idea was born: make wooden desks, in his garage workshop during off-hours. And true to form, the engineer used the efficiencies Intel preaches, to create one digitally first. "With the design that I settled on, I was able to get two desks out of one full sheet of plywood," explained Poindexter.

Screws, some glue and sanding and his first 12 were done. They look just like desks you'd have in elementary or middle school, with a cubby space underneath to keep materials. September 1st he posted a photo to his Facebook of a couple of the desks, writing, 'I don't think it's a surprise to anyone that some people may be struggling right now with everything that we have been put through in the last few months. I am lucky that I am in a position to be able to help others at this time, so I sat down and came up with a simple design for a small desk for school students. Being plunged into the "work from home" lifestyle, I know how critical it is to have a dedicated work space that will allow you to focus. If you have a school age child and need a desk but are not in a position to be able to purchase one or build one, please reach out to me, I would love to help.'

Six days later, what had been a relatively small wildfire in the rugged terrain of Santiam Canyon known as the Beachie Creek Fire, exploded from high winds and hot temperatures and barreled toward the small towns along Highway 22. Catherine Jensen and her family were asleep in their Lyons home when the flames reached their property. "We kind of woke up to it and drove out through it. Thankfully we made it out and our neighbors made it out," she recalled. "Children, dogs, ourselves, that's all we could grab, it was that fast."

Jensen, her husband, and two boys are longtime family friends of Poindexter. He had no idea when he started the desk project, they would be among the 4,000 Oregonians to lose their home and all their belongings in the wildfires. Twin sons Dominic and Elijah were about to start 3rd grade, and now they had nothing. Living in temporary housing, they were definitely top of mind for Max in that first batch of desks, and they each received one as they started virtual learning.

Credit: Catherine Jensen
Elijah and Dominic Jensen smile at their desks made by family friend Max Poindexter, as they learn in virtual 3rd grade classes in Lyons, Ore.

The Jensen's are now back on their property in Lyons, living, working remotely and doing virtual school in a large travel trailer as they rebuild. Jensen showed us via Zoom as the boys were studying in a push-out section of their trailer. They're able to move the desks aside and get into their bunk beds when they're not using them.

That September Facebook post went viral and people wanted to help. $1,700 in donations poured in, along with a tool manufacturer that heard about what he was doing and donated clamps and screws.

Poindexter has built desks for 99 kids so far, mainly in his area of Keizer. He's set a goal to hit 200.

"I think he is one of the most selfless people out there, what he's doing for children all over the state of Oregon is amazing," said Jensen. "Especially since some families can't afford to just go out and buy a desk. What he's doing to help their children is something that will never be forgotten."

Poindexter isn't taking any more donations or solicitations for desks. He has a list of the final recipients. Intel has forecast employees to start coming back to work in-person next June.