SALEM, Ore. — Federal immigration officers stopped two vans carrying 19 workers headed to a forest in Oregon to pick an ornamental shrub and 11 were detained, according to federal officials. 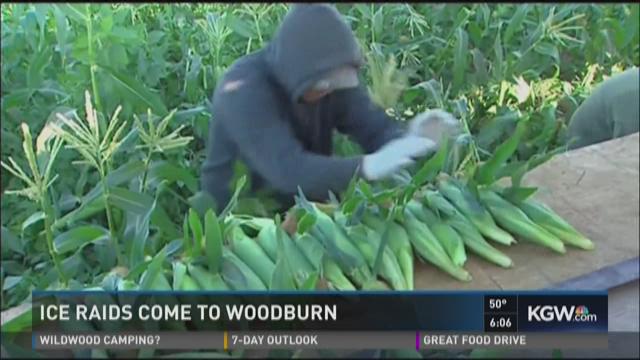 SALEM, Ore. — Federal immigration officers stopped two vans carrying 19 workers headed to a forest in Oregon to pick an ornamental shrub and 11 were detained, according to federal officials.

The Immigration and Customs Enforcement officers made the traffic stops in Woodburn and on a highway just outside town early Friday, said Pedro Sosa of the American Friends Service Committee, a Quaker group.

He said most of the workers are Guatemalan and at least one is Mexican.

In the operation, the ICE agents had been targeting two people, both of whom had arrest records and one of whom had a criminal conviction, Rose Richeson, an ICE spokeswoman in Seattle, said Tuesday. The agents initially detained 11 people but released four of them after records revealed they were already involved in deportation proceedings, Richeson said in an email.

"Three of those who remain in ICE custody have prior criminal convictions for crimes including child neglect, battery, and DUI," Richeson said. "All seven will be processed for removal from the United States."

Given freer rein by President Donald Trump, ICE teams in Oregon seem to be focusing on Woodburn, a predominantly Latino town located off Interstate 5 between Portland and Salem.

Agents followed one van and pulled it over after the workers stopped for coffee at a gas station, Sosa said. A half-hour later, the agents stopped the other van in Woodburn. Sosa said the workers had been heading to a forest to pick salal, used for floral arrangements, and worked for contractors.

On Feb. 9, a Woodburn man, Saul Loeza, was detained by ICE agents and sent to the detention center in Tacoma.

His daughter, Michelle Loeza, told news outlets that her father was pulled over while driving to work at a nursery. The agent asked about the whereabouts of Loeza's brother, who had a driving while intoxicated conviction. Loeza replied that he was in Mexico, his daughter said.

Richeson said Saul Loeza was taken into custody after it was determined he was previously convicted of driving under the influence of intoxicants and providing false information to the police. Loeza remains in ICE detention while his deportation case undergoes review.

An emergency community meeting was planned for Wednesday at 5:30 p.m. at the PCUN office, located at 300 Young St. in Woodburn.