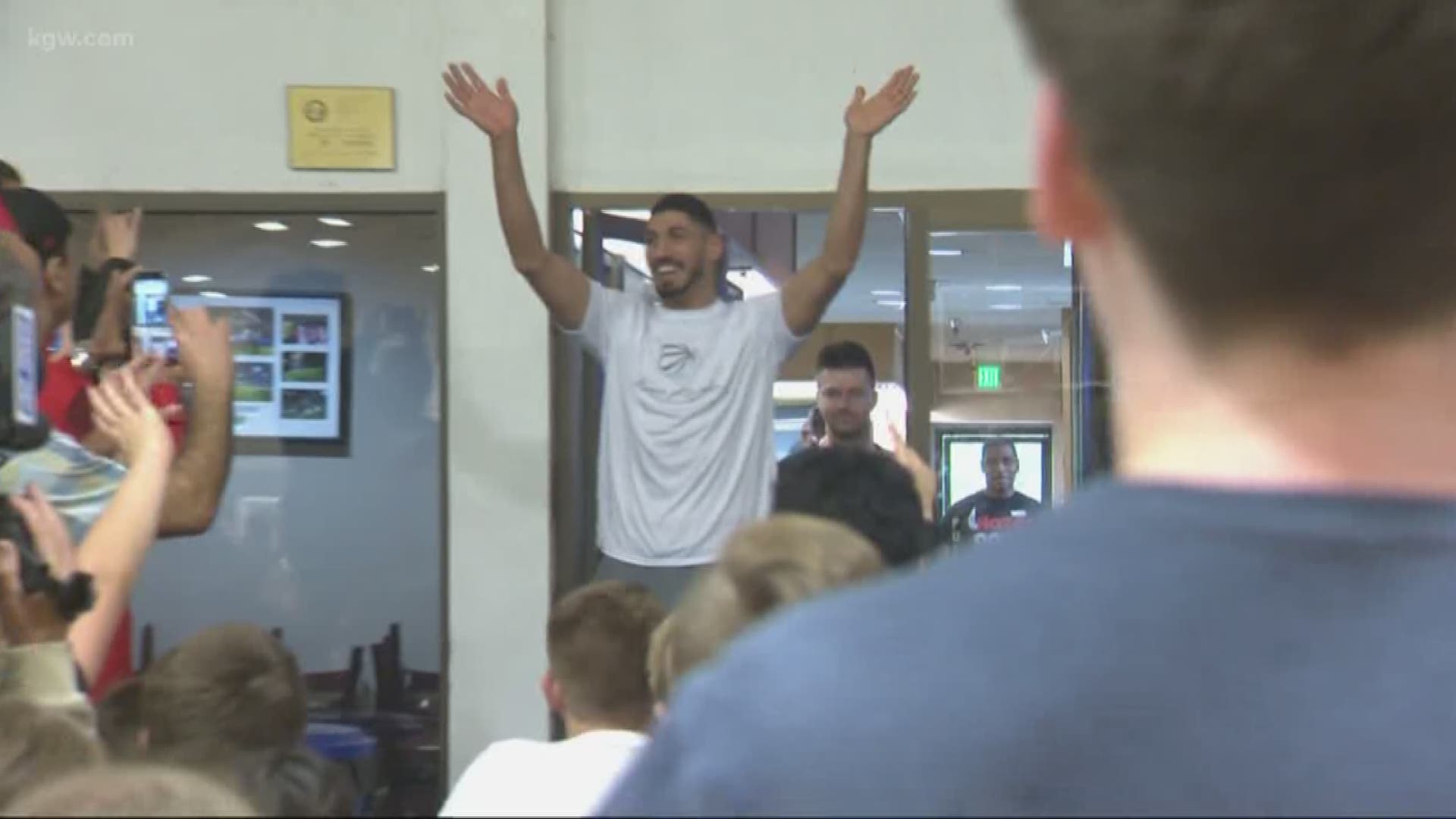 PORTLAND, Ore. — Trail Blazers Center Enes Kanter will spend his summer on the road hosting around 40 free camps in 33 states. Kanter kicked off the camps Friday in Salem before a massive turnout in Portland Saturday.

More than 800 kids hit the hardwood over two sessions of Kanter Basketball Camps Saturday at East Moreland Community Center. There was such a huge response from the community Kanter’s team had to add more sessions.

Every kid who spoke to KGW said they were ready to learn how to be a better basketball player, but they were most excited about meeting Kanter.

“It's awesome, when I heard about it I was freaking out because it was so cool,” Emmy Sheridan,9, said. “I'm excited to see Enes Kanter.”

Kanter says he knows what it's like to be a kid looking up to NBA stars, but never getting a chance to meet a player in person. He wanted to give those like him a chance.

I'm putting myself in their shoes. You know, it would be so nice for them to meet an NBA player. Just talk to them, have a conversation. Maybe play one-on-one,” Kanter said.

He tells KGW that he believes it’s important for NBA players to give back to the communities that support them.

“You can only play basketball for so long… I want to look back – and you know what, how many people have I inspired when I'm done with my career? It's very important,” Kanter said.

Saturday there were plenty of opportunities to do just that with hundreds of kids looking up to him for inspiration.

“He's kind of like a role model. It'll definitely help me move on in basketball,” Ezra Hedrick,12, said.

Kalia Caoile,10, wants to play for the WNBA one day. She signed up for the camp to work on her dribbling skills and to meet Kanter.

Even parents who were watching from the stands saw the camp as an opportunity for their kids to dream big.

Nicole Carlson brought her son to the camp. She says whether he wants to play professional ball one day or not, meeting and learning from Kanter will say with him for the rest of his life.

“It’s so exciting. I mean you can go to the games and watch them play or you can watch them on TV, but when they can actually interact with them it brings it to life,” Carlson said. "It actually creates an opportunity for him to think maybe one day he could do this."

Head Coach Terry Stotts even stopped by for an impromptu Q & A with the kids. One of them asked about if Kanter would be with the Blazers next season. He said there are a lot of factors that go into that decision but told them, "would love to have him on the team again."

As for Kanter, right now he says he is focused on the summer and what is to come. He hopes to inspire kids around the country.

“I'm just going to give them one message; play hard, play smart, and most importantly have fun,” Kanter said.

Kanter’s manager tells KGW more than 900 kids signed up for the Portland camps within just 72 hours. Organizers added two sessions on Saturday and there will be a third on Sunday. Both Kanter and his manager say there will be an “open door policy.” So, expect a big crowd Sunday.

For more information on the camps visit themaestrosports.com/camps

RELATED: 'We're not discouraged, we're not down, we're not defeated': Blazers vow to bounce back after Game 1 loss