Over 500 people from more than 80 countries became U.S. citizens during the largest Fourth of July naturalization ceremony in the Northwest. 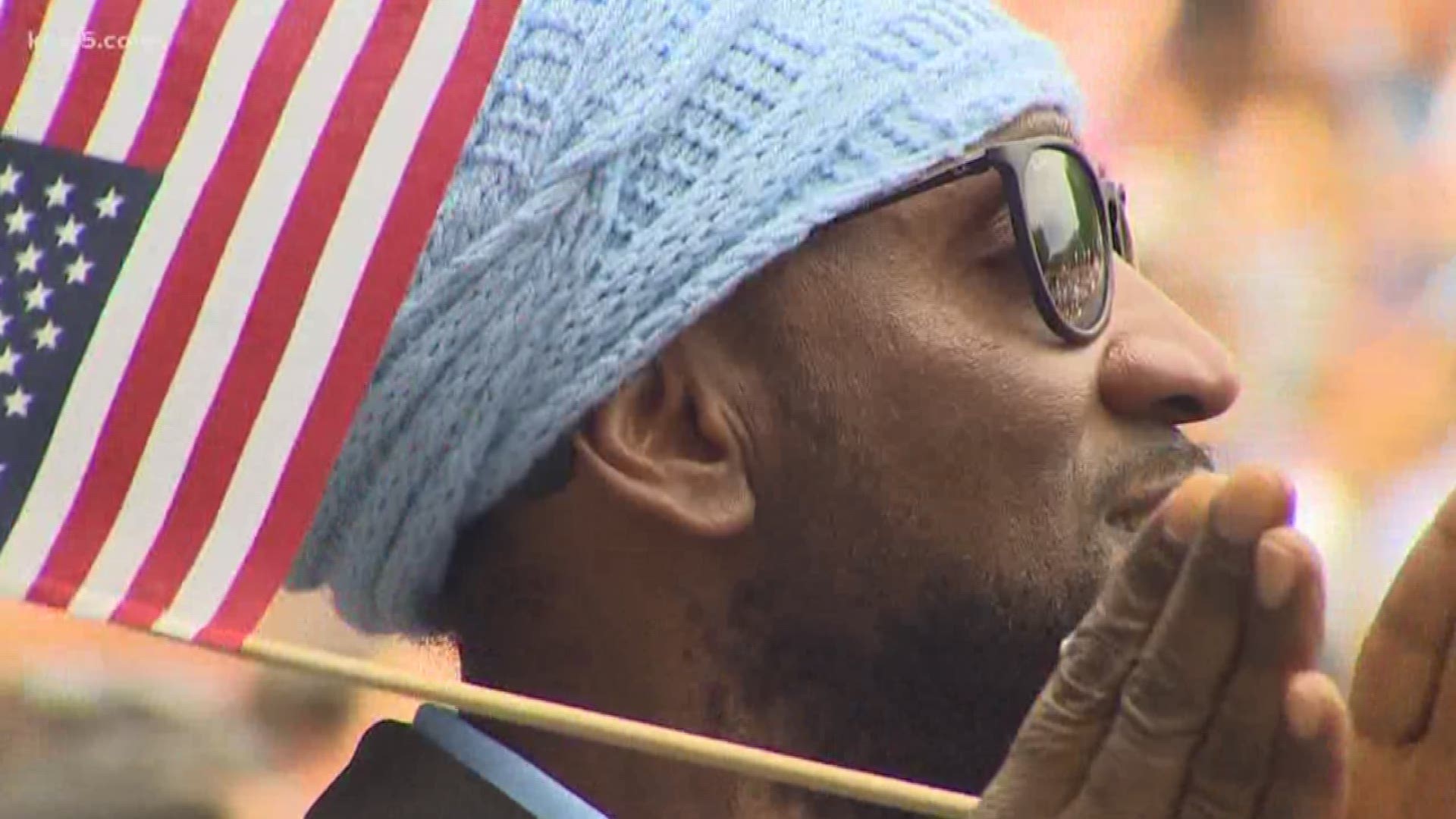 Seattle welcomed more than 500 new U.S. citizens on the Fourth of July, at the annual Independence Day naturalization ceremony at Seattle Center.

From Angola to Zambia, more than 80 countries were represented at what is being called the largest daytime Independence Day observance in the Northwest.

Of the more than 500 new citizens, 55 immigrated from India, 48 from the Philippines, 44 from Mexico, the top three countries represented at this year's ceremony.

"I am very, very happy," said Fattaneh Tashakor, the single new citizen from Iran at this year's ceremony.

Hundreds of people from the public joined the celebration as Federal Judge Richard C. Tallman presides over the ceremony in the shadow of the Space Needle. Some of the spectators held signs welcoming the new citizens.

"Your voice is loud and clear that diversity in the United States is celebrated," said U.S. Senator Maria Cantwell, D-Washington, before a cheering crowd.

New citizen Ingris Sanchez of El Salvador says she was brought to the U.S. by her parents who fled Central American in the 1980s.

"I came here when I was a year and a half old," she said of a process that took 30 years.

Decades later, instability and violence are still causing people to flee and risk everything to try and enter the United States.

"It's heartbreaking," said Sanchez. "We can't lose hope. We have to stick together and help as much as we can.

"There's a lot of hardships there," said new citizen Nicomedes Gomez from Belize, located along the coast of Central America. "It's really hard to get over here. It takes a lot of time."

"If you want to come here, you've got to do it the right way," Gomez said, remarking on the current immigration crisis at the border.

For some the naturalization process took several years; for others, it took decades. The new citizens are diverse in age, origin and background, but they share a common bond and love of their new country.

"It's like I'm moving forward to success," said Ainsworth Prendagast of Jamaica.

"America to me is a land of opportunities and exercise your freedom and your religion," said Nicomedes Gomez.

"This is an amazing country of opportunity and a great place to raise our kids," said Ivan Jaramillo of Ecuador, who was sworn in with his wife on Wednesday. They secured the last two spots for the popular Fourth of July ceremony.

"This for us, it’s something that’s going to be remembered for generations," said Jaramillo. "It’s a celebration."

A pre-ceremony performance by the Navy Band Northwest started the festivities. The formal program started with the presentation of colors by the Washington State Guard Color Guard and singing of the National Anthem by Maria Plancich Kesovija.

This is the 34th year of the annual event.