The camping ban could go into effect as early as December. 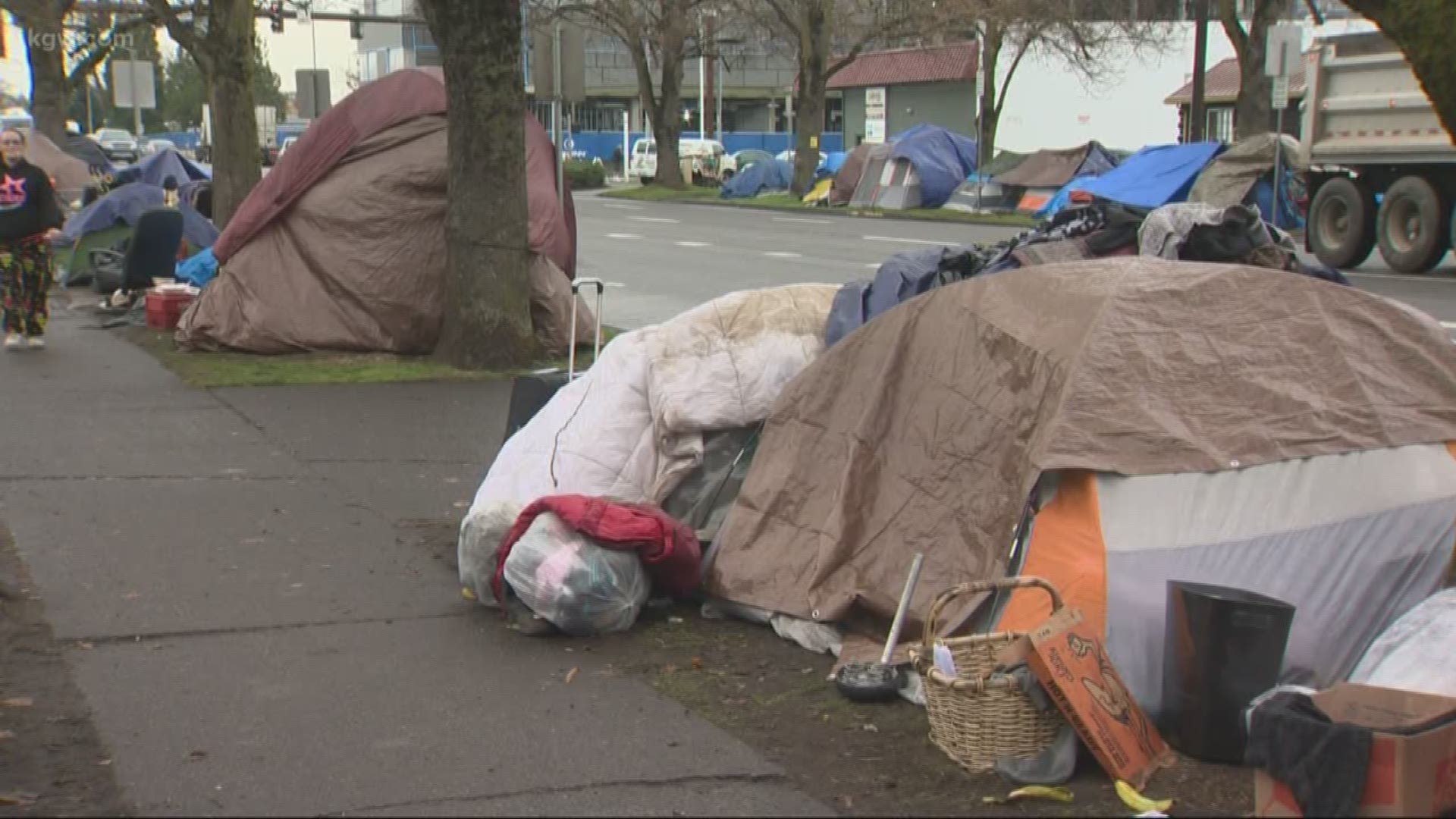 SALEM, Ore. — Tents line both sides of the street outside of a low income housing program in Salem called Arches.

“It’s a real eye catcher and one that I think influenced what’s happened, but we just can’t have that, we really can’t,” explained Salem Mayor Chuck Bennett.

“I know other communities appear to be, I don’t know if Portland can tolerate it or Eugene can tolerate it, but it doesn’t work well in this community. It’s not really acceptable.”

Mayor Bennett said the homeless camp outside Arches is part of the reason why the Salem City Council brought back an ordinance that failed roughly two years ago. It is commonly referred to as the sit and lie ordinance, because it would have banned sitting or lying on public sidewalks from 7:00 a.m. to 9:00 p.m.

That part of the ordinance was rejected again, but a camping ban was approved. Many hope it will help solve issues downtown businesses and customers are dealing with.

“Human waste on their front door steps, they’ve had to come in early to clean it up, people leave trash and there’s been some retaliation,” said Hazel Patton, the Interim Executive Director of the Salem Main Street Association, that advocates for a vibrant downtown.

Patton said there has to be a better way for downtown area to be shared by businesses and those experiencing homelessness.

“We’re all compassionate, we all care about these people, and we all don’t want them to be unsheltered, as the word is now, but we also understand that business, downtown is fragile, as downtown’s are, and businesses will leave if there isn’t something done to protect them,” Patton explained.

The camping ban could go into effect as early as December. That is when city councilors will vote on the ordinance again. The move is mostly procedural though and is expected to pass a second time.

Under the ban, campers will be given notice to move within 24 hours. If they do not, police and code enforcement would be responsible for clearing the camp.

Several people living in the large homeless camp outside of Arches said they have nowhere else to go.

“I’m blessed because I have a car, so I can find any alley on the street to pull over and take a nap, but some of these people don’t have any resources at all and it’s very sad,” said JT, who lives in the camp.

JT said he has been living on the streets in Salem for four years. When asked what is keeping him from getting housing, JT said, “Nothing, because the veterans administration just told me to contact these guys at Arches and they’re gonna get me a place and they said within 30 days.”

Anthony Stevens said he has been homeless for about a year. Stevens has been living in the camp outside Arches for a few weeks now.

“Unfortunately, we have no other place to go,” Stevens said. “I know they don’t want us cause we’re an eye sore. I know that crime jumps every place there’s homeless people, but we’re just trying to live. We’re just trying to survive.”

If he is forced to moved, Stevens said he will just find another place in the city to camp.

“We’ll do what we always do, we’ll just pack up, we’ll move to another spot until we get kicked out of there and then move again and move again, until eventually we’re out of sight and that’s what they want,” Stevens said.

Stevens said there are not enough resources available. He said he tried to get a mental health evaluation through the state, but said he was told there is a six month wait.

“It’s really housing, getting people housed and Salem has the largest Housing First Program in the state of Oregon,” Bennett said.

Salem City Councilor Vanessa Nordyke voted against the sit and lie portion of the ordinance, but in favor of the camping ban. Nordyke said she is looking to bring a street response program, similar to CAHOOTS in Eugene, to Salem.

She said more needs to be done to help homeless individuals in crisis.

“What we heard from the community last night was a compelling need to treat our homeless with dignity, that with winter coming, people want real and they want evidence based solutions to talk about, how do we solve homelessness, not how do we shuffle people around from one street corner to the next,” Nordyke explained.