The process is based off of a similar program in Houston, Texas. 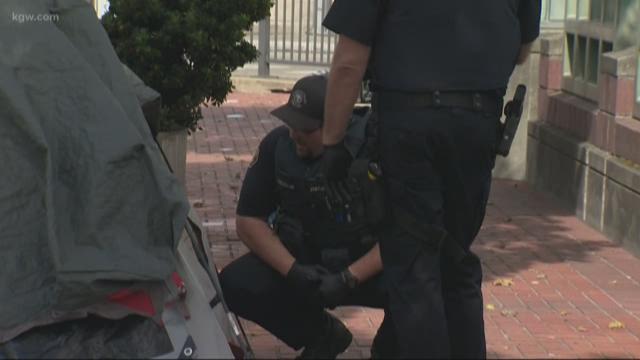 They got it thanks to a new pilot program spearheaded by Portland police and Cascadia Behavioral Healthcare. It’s called the “ID Project," and it’s primarily the work of two officers.

“We just know the individuals,” said officer Ryan Engweiler. “We know the issues they have and how difficult it is for them.”

Engweiler and officer Tim Engstrom work on the Central Precinct’s Neighborhood Emergency Response Team. Under the project, which is part of a larger campaign aimed at getting minorities into housing, they make contact with people living on Portland’s streets and help connect them with resources that will help them get into housing.

A frequent hurdle, they soon found, was people’s lack of IDs. In most cases, they’d been lost or stolen.

“I had my tribal ID, a state ID, my social security card, my bank card, everything,” said the 56-year-old, who camps downtown. “I had it all.”

Officers Engweiler and Engstrom hear stories like that a lot. Ironically, they say, previous police work can help them get the ball rolling.

“What this program allows us to do is provide that proof of identity of who the person is,” said Engstrom. “If they’ve been in the system, if we’ve had previous contact with them, we can kind of use that to actually help them for a change and get their ID, so we can get over that barrier and get them into housing.”

Officers Engstrom and Engweiler have even gone so far as to accompany people to the DMV. They’ve also been certified as notaries.

The process is based off of a similar program in Houston, Texas, and it was brought here by Sgt. Shaun Sahli.

It’s a welcome life-raft, said staff at Cascadia, since most people living outside are intimidated by the idea of starting from scratch.

“It's a complex process because without ID, you can't get ID,” said Liora Berry, director of homeless services. “So, you have to prove like where you were born, and with changes that also came with concerns about terrorism, there's even more barriers.”

Berry added Cascadia pays any fees associated with obtaining an ID for participants in the program.