'Hard to be a lonely old vet': Portland's homeless veterans grapple with isolation amid pandemic

Staff with nonprofit Transition Projects have been handing out supplies, warm clothing and information on resources for veterans struggling with homelessness. 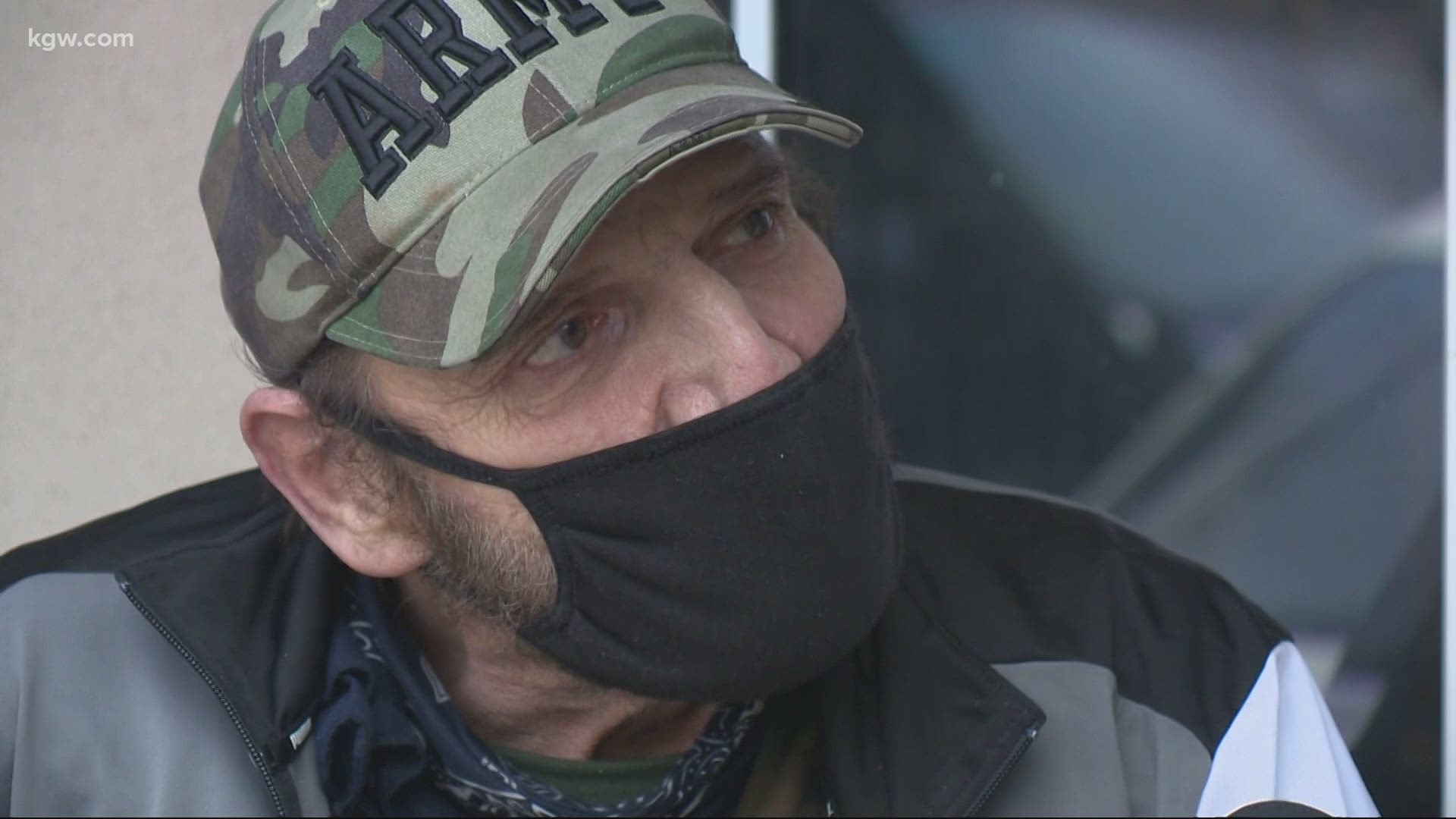 PORTLAND, Ore. — Wednesday morning, in the parking lot of a Northeast Portland motel, two women opened the trunk of a white hatchback and pulled a green Army surplus bag from the pile of them inside. They also pulled out a potted plant.

“[We’re] really excited, one, to be able to thank our veterans for their service and also to be able to help them out a little bit more,” said Roma Peyser, director of development for Transition Projects.

Staff at the Portland-based nonprofit have been fanning out across Multnomah County all week, handing out hygiene supplies, warm clothing and information on resources to veterans struggling with homelessness. Amid the isolation imposed by a global pandemic, the face-to-face contact is just as valuable as the donations, Peyser said.

On Wednesday, Veterans Day, she and her colleague came to the Motel 6 on Northeast Holladay Street. Three veterans were staying in rooms at the motel, thanks to grants from the U.S. Department of Veterans Affairs.

“Good morning!” Peyser yelled, as one of them opened his door.

Steven Woolford, a Navy veteran who enlisted during the Gulf War, is in a wheelchair due to diabetes complications. He lives off of disability, which doesn’t cover rent.

“I literally have to go out and panhandle sometimes, and I hate that because it makes me feel so low,” he said, adding he lived in his car for a year before moving into the motel. “It's been difficult. Like I said, if didn't have my cats here with me, I'd be going stir crazy. They keep me happy and give me something to love.”

On this #VeteransDay2020, local veterans experiencing homelessness are getting a face-to-face visit & a delivery of needed supplies, courtesy of @transitionpro.

That includes “thank you” notes from people in #PDX 🇺🇸🙏 pic.twitter.com/9JSZpLGXPp

This week’s deliveries are, staff say, supposed to serve as a replacement to the Portland Veterans Stand Down, an annual fair held inside Veterans Memorial Coliseum, on or around Sept. 11. Agencies at the event offer everything from haircuts to information on job training and addiction treatment.

Last year, close to 500 local veterans attended. This year, staff decided they couldn’t leave the veterans hanging, even if it meant tracking them down one by one.

“Well, this pandemic wasn't going anywhere,” said volunteer program supervisor Emily Coleman, as she organized volunteers in that warehouse. “We started brainstorming [as to] how we could still provide these services in a safe way to the veterans that we're serving.”

According to the 2019 Point In Time Count, a procedure mandated by the Department of Housing and Urban Development, close to 470 veterans were homeless in Multnomah County. That’s more than 11% of the county’s overall homeless population. According to the same counts conducted nationwide, federal officials estimate 37,085 veterans are experiencing homelessness. It’s worth noting, while there’s no data to prove it yet, service providers believe homelessness rates have risen in all demographics nationwide since the pandemic began.

On Wednesday, Army veteran Kurt Tucker hung a U.S. Army flag in his motel room, as Peyser approached, holding his delivery. He admitted he hates the loneliness.

Tucker added his parents passed away this year, as did his support dog.

“I don't know,” he said. “It's pretty hard to be a lonely old vet out here. I'll get by. Something's keeping me here.”

Staff said any veteran struggling with homelessness, paying rent or other housing issues, can call Transition Projects’ Veteran Hotline at: 1-855-425-5544.