Most of the roughly 15 people living there now have been offered spots in a new tiny house village opening soon in North Portland’s St. Johns neighborhood. 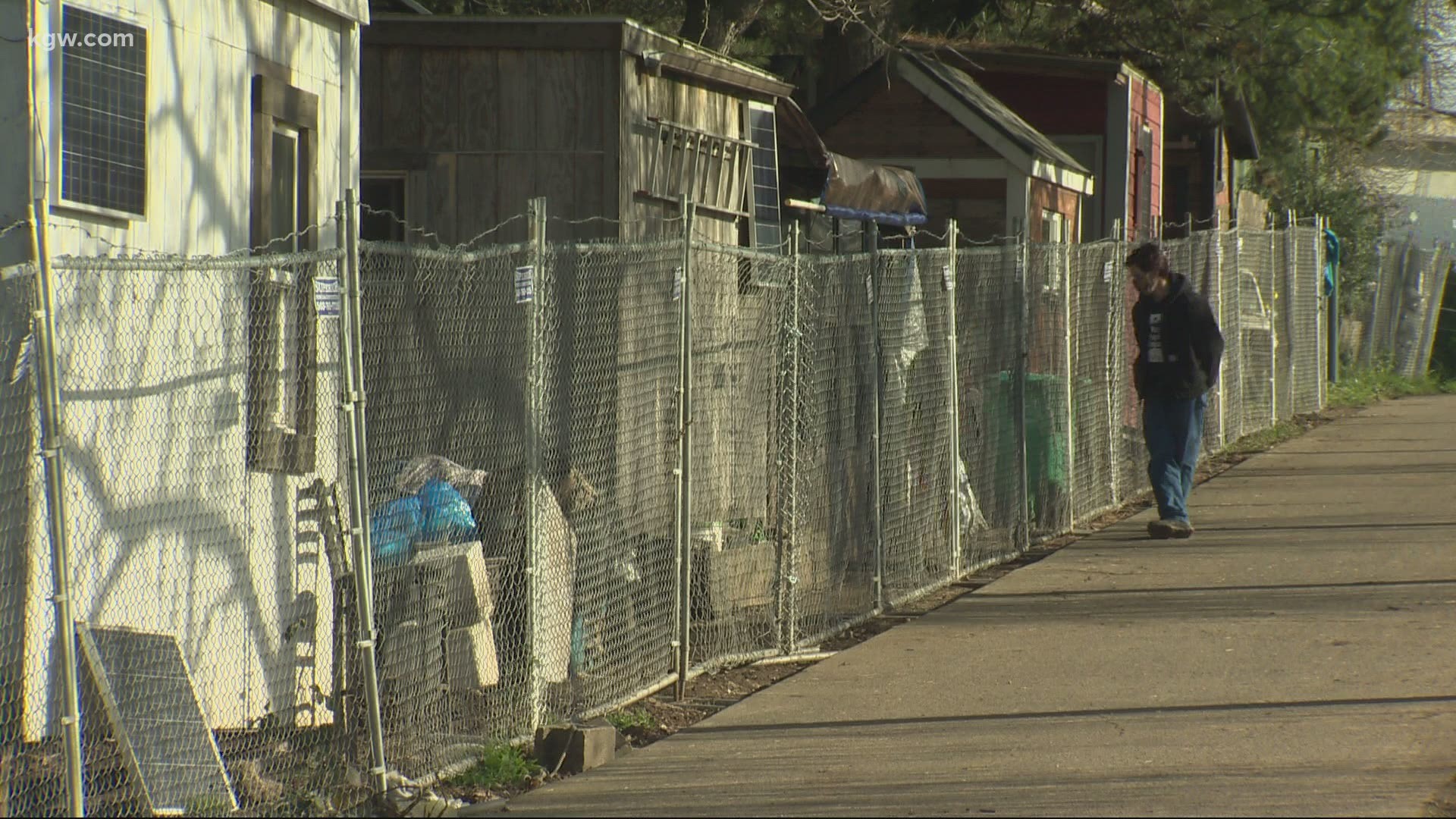 PORTLAND, Ore. — More than five years after putting down roots on publicly-owned land, essentially daring the city to make them move amid a newly-declared housing crisis, residents of North Portland’s self-governed homeless village “Hazelnut Grove” have learned their days are numbered.

The announcement came Monday via a news release that quoted both Mayor Ted Wheeler and Housing Commissioner Dan Ryan. Neither was available for an interview.

Describing the village’s hillside location along North Greeley Avenue near North Interstate Avenue, the release read, “Steep slopes create a danger of landslides and other environmental problems. The location is difficult for firefighters to access, jeopardizing residents’ safety in this wooded setting.”

The release added the reason for “decommissioning” the village now was simple: residents have somewhere to go.

Most of the roughly 15 people living there now have been offered spots in a new tiny house village opening soon in North Portland’s St. Johns neighborhood. The rest, the release said, will be offered emergency housing and shelter space, a process being coordinated through the local nonprofit Do Good Multnomah.

Officials plan to start clearing out the village within the next month.

Barbara Weber, who’s been living in Hazelnut Grove for about a year, said residents knew this might happen. Still, they’re furious.

“I've suffered chronic homelessness. I know what that feels like,” Weber said in an interview Tuesday. “That's it. And I want to be with this community, and [the city] promised to move this community to land where they could be self-governed together, not ripped apart.”

After 5+ yrs, the city of #PDX says the self-governed homeless village Hazelnut Grove must go.

Most here are being offered spots in a new tiny house village in St. Johns. Rest will get emergency housing through a non-profit.

Weber added residents have started working with a local branch of the Poor People’s Campaign, a movement founded by Dr. Martin Luther King Jr. in 1967. They started a petition to try and convince city officials to change their minds. In a couple weeks, they’ve gathered more than 2,000 signatures.

She added fewer than half a dozen residents think they'll take the city up on their offer. The rest haven't decided what they'll do.

A memorandum of understanding signed by members of the village and the city in 2018 set a goal of finding a "new site" for the village, but it also prioritizes "securing permanent housing" for its residents.

In Monday’s news release, the city showed no signs of reversing course.

“It’s understandable that people have passionate opinions on both sides. We’re making decisions that affect people’s sense of safety and their living environment,” Commissioner Dan Ryan was quoted saying in the release. “I want to thank everybody involved for working together to find a respectful, innovative, and safe solution.”

That said, city officials have promised to clear out Hazelnut Grove before. Those plans have never come to fruition.

On Tuesday, Chris Trejbal, the vice chair of the Overlook Neighborhood Association, said he’s hopeful this latest plan is for real.

“They've identified a new spot in the St. Johns Village that a lot of the residents … can move to. They've worked with the other residents to identify places for them to go,” he said. “So, I think there really is intent on the part of the city to follow through this time.”

The association, as well as many residents in that neighborhood, which sits just up the hill from Hazelnut Grove, have called on the city to move the village since its inception.

Earlier this year, they sent a letter to every sitting city commissioner and the Joint Office of Homeless Services, demanding officials keep their years-old promise to disband the village.

“The current situation is a humanitarian catastrophe,” the letter read. “Living outdoors puts people’s health at risk and leaves them vulnerable to victimization. Meanwhile, campsites are causing environmental damage to our communities, rendering public spaces and parks unusable by the public, and are documented launching points for property damage, theft and other reported crimes.”

Trejbal didn’t know of the city’s concrete plan until Monday. He said he’s grateful for the movement. He added, amid historic job losses tied to the pandemic, homelessness appears to be rising, and the city has more work to do.

“There's a lot of camping that goes on along Going Street out to Swan Island, and then in Madrona Park that is very troublesome,” Trejbal said. “There have been multiple fires there in the past year. These are areas that we're going to continue to advocate for the city to take action on.”