After months of buildup, city vows to clear homeless camp at Laurelhurst Park 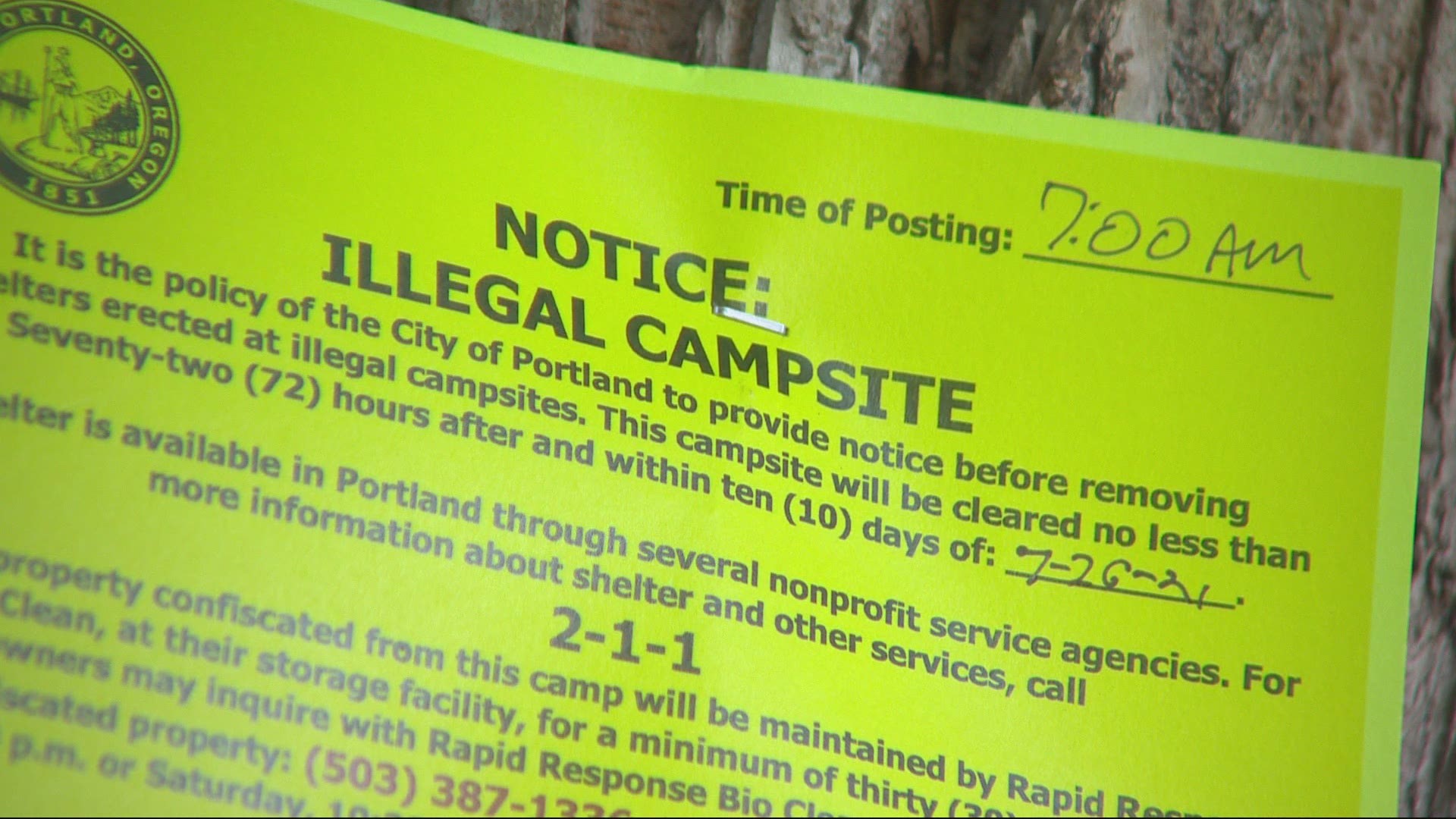 PORTLAND, Ore. — People camping in and around Southeast Portland's Laurelhurst Park woke up Monday to a ticking clock. City crews had been out early, posting lime green eviction notices, warning campers they had 72 hours to pack up and leave.

For those living in their cars, crews posted "no parking" signs. They go into effect Wednesday.

Some campers said they'd expected the city to act. Others were stunned.

"This [camp] is the result of a global pandemic," said a woman who identified herself as Mama Zeigh. "You have to give us a place to live."

“You have to give us a place to live.”

After months of buildup, the city is clearing Laurelhurst Park in SE #PDX. Crews were out posting eviction notices this morning.

Campers have 72 hours to pack up & leave. pic.twitter.com/CBmpbuyFUe

All five Portland city commissioners, including Mayor Ted Wheeler, released a statement Monday on the plan. It comes nearly a year after dozens of campers put down roots at the park.

Housing activists began visiting and demonstrating at the park regularly, vowing to fight any attempt by the city to clear campers. For months, city officials treaded lightly, holding meetings with activists and documenting their demands.

In November 2020, crews contracted by the city of Portland began clearing homeless campers in the park, but many campers came back.

All the while, neighbors argued the situation was increasingly unsafe. They've documented fires, fights and break-ins. Recently, the city's release stated, someone reported a camper brandishing a gun. That appeared to be a tipping point.

"The situation has devolved into something unsafe and unhealthy for everyone involved. Unfortunately, we are no longer able to serve the unhoused community near the park," the statement read. "Therefore, we made the difficult decision to authorize the Impact Reduction Program to post vacate notices along Oak and 37th Streets."

KGW printed out copies of the release and showed them to people camping at Laurelhurst. Bryon Clark read the entire document.

He added most people in the camp have no idea where they'll go.

"This is not a solution," said safety chair TJ Browning. "I have mixed reactions."

In an interview Monday, Browning argued the camp isn't safe, but she wishes the city would do more to get people off the streets, instead of moving them around.

"I want to know why it's taken so long and why the city wasn't better prepared," Browning said. "We've been telling them about these conditions for almost a year."

The city's Impact Reduction Program is responsible for clean up of unsanctioned campsites on city and ODOT owned properties. The city council said contractors with the program have regularly picked up trash and "hazardous materials" at Laurelhurst Park. Parks and Recreation has provided porta-potties and cleaned restrooms to care for the park.

The commissioners' release said staff will help people who are interested in finding shelter beds and services and "If personal property remains, we will diligently inventory every piece."

But those sites won't be ready for months. Laurelhurst is set to be cleared this week, and some there said they'll be back within days.