Over the weekend, some homeless advocates set up wood platforms, tents and a makeshift kitchen. 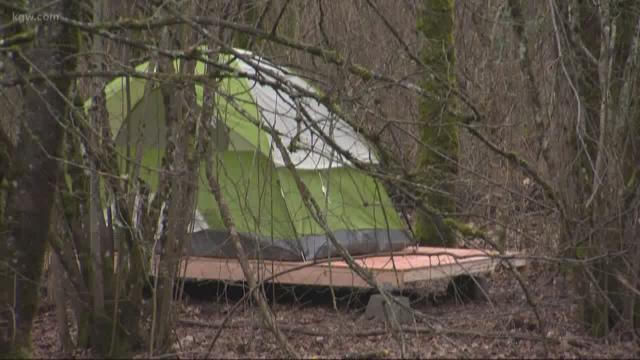 PORTLAND, Ore. -- A new homeless village popped up this weekend in Northeast Portland and many neighbors are not happy about it.

It's called "Village of Hope."

Over the weekend, some homeless advocates set up wood platforms, tents and a makeshift kitchen in an area situated near the Columbia River Slough, just off Northeast Airport Way.

"We do all this in order to provide security so people can move off the street, so people can have hope," said homeless advocate Steve Kimes.

Kimes' goal is to offer shelter to 20 residents. But the camp is located on city property and a designated natural area. It's also located near several businesses.

Business owners are worried the camp will impact not only the environment, but business as well.

"I respect the message and what's going on, but I don't want to lose revenue. I don't want it to impact my business," said Jason Wasserman, who owns Udoxi Scientific.

In a statement, the city acknowledged that homelessness is not a crime, but it went on to say that the area where the camp is located is a public park, not a place meant for a homeless camp.

A statement from Mayor Ted Wheeler's office said, in part, “This kind of unilateral action undercuts the efforts of government, nonprofits, and the private sector partners who are aligned on a solution. The outright appropriation of environmentally sensitive public lands, intended for the use of everyone, is unacceptable. Rigid structures should not be constructed on lands the public has invested in heavily to preserve."

The city said it will be working with social service organizations to help find the campers a more appropriate place to live.