The Portland Veterans Stand Down moved outdoors for safety, but offered volunteers a chance to reach veterans who may have been isolated over the past year. 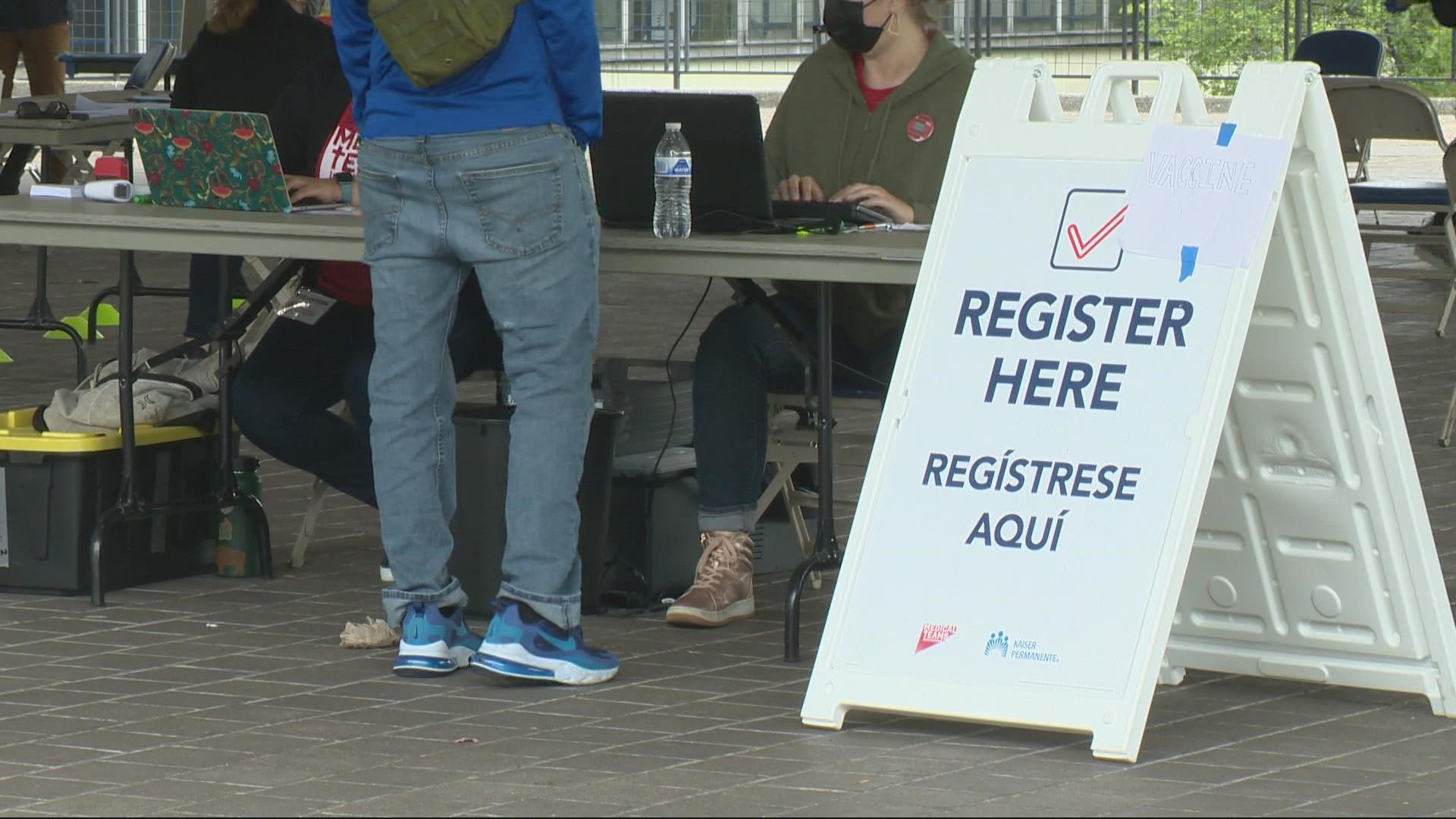 PORTLAND, Ore. — On a gray, cloudy Friday morning outside Portland’s Veterans Memorial Coliseum, Angelo Domena rolled up his sleeve and ended months of debate by getting vaccinated against COVID-19.

“Lord, [I was] nervous,” said the U.S. Navy and Desert Storm veteran. “But I was talking to my daughter on the phone, and she was telling me ‘Hey, Dad. I got mine. Get yours.’”

It helped that the shot, a single dose of Johnson and Johnson, was offered in a familiar setting: the 2021 Portland Veterans Stand Down. It’s an annual event, sponsored by the local nonprofit Transition Projects and aimed at helping homeless veterans.

They hold it every year around September 11 to thank veterans for their sacrifice.

Normally, the Stand Down is held inside with huge crowds, but with the pandemic still raging, that wasn't possible. This year, staff and volunteers held the event outside Veterans Memorial Coliseum. They handed out info on jobs and passed out close to 300 duffel bags, stuffed with clothes and hygiene products. Some of those bags were handed out at the event. Staff and volunteers drove dozens directly to veterans at local shelters and camps.

According to the last government count, conducted in 2019, close to 470 veterans were homeless in Multnomah County. That’s more than 11% of the overall homeless population. While there's no new data to prove it, experts believe more people have become homeless since the pandemic began.

Organizers with the Veterans Stand Down say it's likely the population of homeless vets is growing, too. It’s why, they said, it's especially crucial to connect with vets at in-person events. Organizers estimated they reached hundreds of veterans and vaccinated 25.

“It gives us a chance to get to know who we’re helping,” West said.

Domena attends the Stand Down every year. He was homeless for the last 15 years and recently got into housing. Even for veterans, he said, the stigma of sleeping on the streets is strong.

“[People] base everything off what you see, people doing drugs or mentally ill. That's how they classify all homeless people and that's not cool, you know what I'm saying?” he said. “Because doors have been closed in my face. 'Do you have an address?' 'No, I'm homeless.' 'Well, we can't help you.' Wait a minute. I'm not on drugs, never been in prison, served my country, but you can't help me? Oh okay ... You've got more people willing to do the work, than you've got people who want a free hand out."

RELATED: Homeless camp near Portland school to be cleared before school year begins