A spokesperson from the city’s Office of Management and Finance said Monday the camp’s proximity to Cleveland High School, which sit blocks apart, was not a factor. 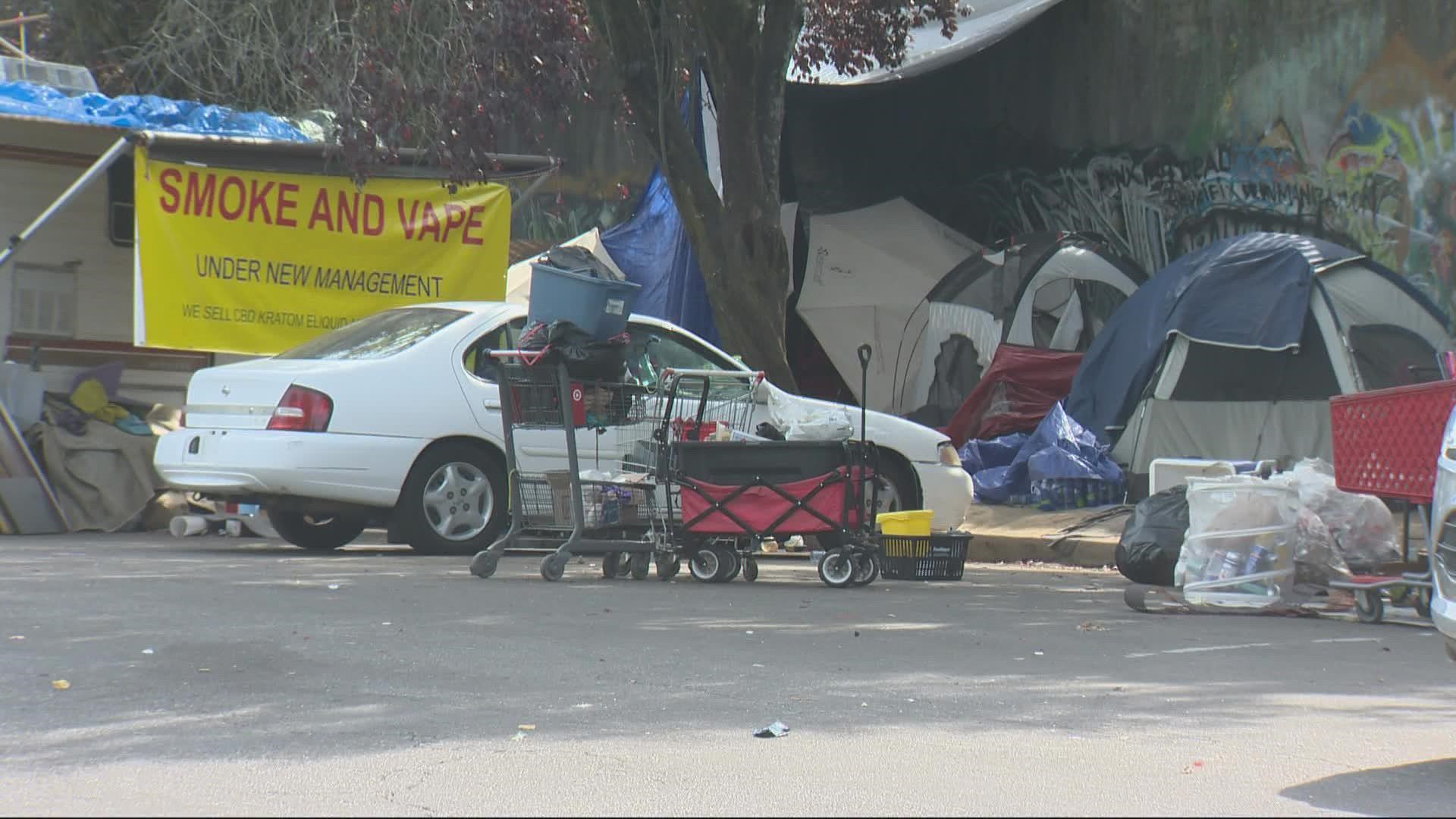 PORTLAND, Ore. — UPDATE: After parents complained to the city and to KGW about students having to pass by it when walking between their school and its football field, the city of Portland is planning to clear a large homeless camp in Southeast Portland. Lime green eviction notices were found nailed to telephone polls and trees at the camp, along Southeast 28th Place at Waverleigh Boulevard on Monday, Sept. 13.

Over the summer, the Portland city council voted to prioritize clearing camps less than 100 feet from high schools. A spokesperson from the city’s Office of Management and Finance said Monday the camp’s proximity to Cleveland High School, which sit blocks apart, was not a factor.

“This site’s highest health and safety risks included the number of vehicles and structures present and the number of needles found,” the spokesperson wrote.

A large homeless camp, with multiple cars and a large banner advertising the sale of vaping materials, lies directly in the more than three-block path between Cleveland High School and its track and football field complex.

Parents, students and campers agree that dozens of students walk by and park near the camp everyday. But even in the face of a months-old city ordinance prioritizing clearing camps near schools, a representative for the city said this one is not a priority.

The reason? It's more than 100 feet away from the actual school building.

“It's embarrassing. I personally am embarrassed myself,” said Jacob, a man staying in the camp. “I wouldn't want my kids to have to walk through it.”

Multiple parents reached out to KGW’s team at The Story about the camp.

“Both HS and middle school students are having to walk through the camp, around objects and trash on the sidewalk to enter the field,” wrote a parent named Matt. “The city needs to either take action to remove the homeless or allow the school to take action before someone is hurt.”

“…it is in direct path from the school to the school's track & field. It's absolutely shameful that our city officials are paralyzed and appear completely inept at doing their jobs,” wrote another parent named Christy.

“Most people like avoid it. Like they'll just go on the sidewalk over there and stuff,” he said.

A representative for the city said via email Tuesday, amid a booming housing crisis, the camp is not a priority.

In an email to KGW, Heather Hafer with the city’s Office of Management and Finance (OMF) wrote, "This area is not within a vicinity of the school, so it doesn't meet our risk criteria of being near a school site."

RELATED: Homeless camp near Portland school to be cleared before school year begins

That criteria, according to a new ordinance enacted over the summer, prioritizes clearing camps 100 feet from high schools or closer. If a camp is farther away than that, the city considers the school a non-issue.

That's the case at Cleveland High School. Officials said this camp is too far from the actual school building for that factor to be considered.

In an email to KGW last month, OMF staff said the city was working to clear nine camps near local schools, adding:

The presence of individuals experiencing houselessness near a school is not inherently dangerous. In areas where potential hazards in or around campsites are identified, the City may respond by sending in crews to mitigate the hazard. This could include placing signage identifying the area as a route to school, providing daily waste service collection, or performing a campsite removal.

Homeowners living nearby were glad the city's not taking aim at the camp.

“My son, who goes to junior high, and I were talking about it the other day, and he said 'it is kind of a mess but I guess if our house didn't have walls around the basement and garage, it would look like a mess, too.”

Karen Werstein, a spokesperson for Portland Public Schools, has repeatedly sent KGW a statement about camps near schools. It reads:

The humanitarian crisis in Portland is deeply concerning to all of us at PPS particularly as we know that some of our students are residents of some of the camps. As a school district, we are focused on safely reopening our schools and we are always concerned about the safety of our students and staff on campus and as they come and go from our schools. We are in continued conversation with both the City of Portland and Multnomah County, as they compassionately and with urgency address this issue. We are also working in partnership with the City to educate our school communities about how we live with our unhoused neighbors.