Amid dry conditions, fires tied to Portland's homeless camps up 130% in last year

Portland firefighters have responded to more than 150 calls related to homeless camps this month. 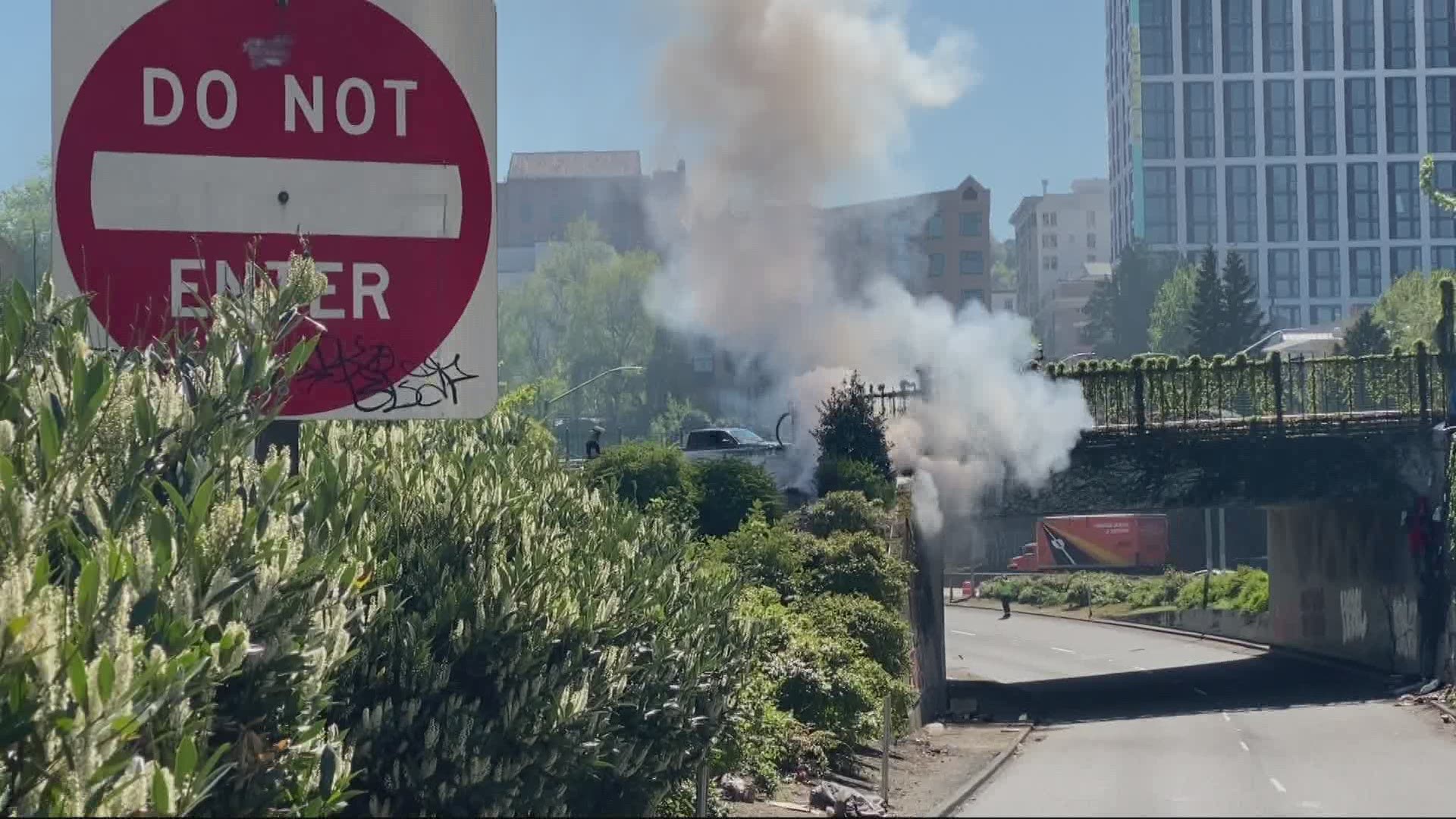 PORTLAND, Ore. — A thick, gray column of smoke suddenly turned black as it billowed into the sky in Northwest Portland Tuesday. Firefighters parked their truck on the overpass to I-405 and jumped out. An employee with the Oregon Department of Transportation parked his truck just behind theirs and followed suit, turning his attention to people on the sidewalk.

“There’s propane cans in there!” he yelled. “I need you to get back!”

The fire sparked shortly after 2 p.m. at the corner of 14th Avenue and Couch Street. Crews on scene told KGW they didn’t know how the fire started, and they didn’t think anyone was hurt.

Firefighters had the flames out within minutes, keeping them largely back from the dried bushes and trees around them. It’s a routine they’ve grown used to: they’d been on more than 157 calls for fires tied to homeless camps in a little over three weeks.

Those numbers have been climbing steadily for more than a year.

“We have a real concern this year,” said Lieutenant Rich Chatman, a spokesman for Portland Fire & Rescue.

While there’s no new data to support such observations, in the last year, Portland's housing crisis appears to have grown at historic rates. This week, KGW learned calls about camps catching fire have spiked, too.

According to data provided by Portland Fire & Rescue, in January 2020, firefighters responded to 67 calls of fires related to homeless camps. In July they responded to 114. Since then, they've received more than 100 calls per month. So far this month, they’ve clocked 157 and counting.

Chatman noted the primary concern is safety of those nearby when the fire starts. More and more people living on Portland’s streets are getting injured.

“It's a main concern of the fire chief,” he said. “This is part of what we are dealing with now with so many people living without roofs over their heads.”

The concern, Chatman noted, is compounded by the same conditions that fuel wildfire fears in rural, wooded parts of the West Coast. Heading into summer, Oregon’s moisture content is alarmingly low, and in Portland, more people than ever are nestling camps into grassy areas, dotted with trees and shrubs.

“What makes Portland so beautiful, Forest Park, all these different areas where we have lots of trees and lots of great vegetation, beautiful stuff… That stuff, when it dries out, becomes an extreme fire risk, especially when it butts up here to the city and these urban areas,” Chatman said. “It not only becomes a fire risk, but a health and safety risk.”

That risk varies depending on where the fire first sparks. When it happens near highways, said ODOT spokesman Don Hamilton, it presents a danger to passing drivers and highway infrastructure.

“Those fires can do a lot of damage, and they’re also a threat to anybody that may be camping illegally in these areas,” he said. “The city of Portland is responsible for addressing the illegal campers [on ODOT property]. ODOT has to keep our property maintained properly.”

When the fires happen near homes and businesses, it puts those buildings, as well as the people in them, at risk.

A viewer emailed photos to The Story team Thursday, showing the remnants of a burned campground along North Portland’s Peninsula Crossing Trail. The fire had happened earlier this week, in the midst of grass and tall trees. A few hundred feet away, you can also see homes in the background.

As spokesperson for the city’s Office of Management and Finance, which determines which camps get cleared by city crews, said a camp catching fire “is one of the components that we take into consideration when assessing campsites for health and safety risks and possible notice for removal.”

Hamilton added ODOT is, more and more, taking fire mitigation into account when it comes to landscaping areas known for camping.

Chatman said firefighters are working to educate people they encounter on fire safety, as are service providers. The causes of these fires run the gamut, he said. Some are the result of arson, or accidents while people in camps use drugs. The vast majority, he said, happen when people light candles or stoves to provide for basic needs: warmth, light and cooking food.

RELATED: Homeless tent fires on the rise in Portland

For people like Wesley Mahan, whose apartment is near the scene of Tuesday’s fire in Northwest Portland, the reality presents a heartbreaking dilemma. He’s made a point to meet people camping near his home, he said.

“You try and help where you can,” Mahan said in an interview Friday. “But you still want to preserve where you live and not have it go up in flames.”