'It gives me courage': A place for veterans to call home opens in Oregon City

Prior to living at Clayton Mohr Commons, Alvin Wilson had stayed in an overnight shelter and lived in his daughter’s car with her and her children. 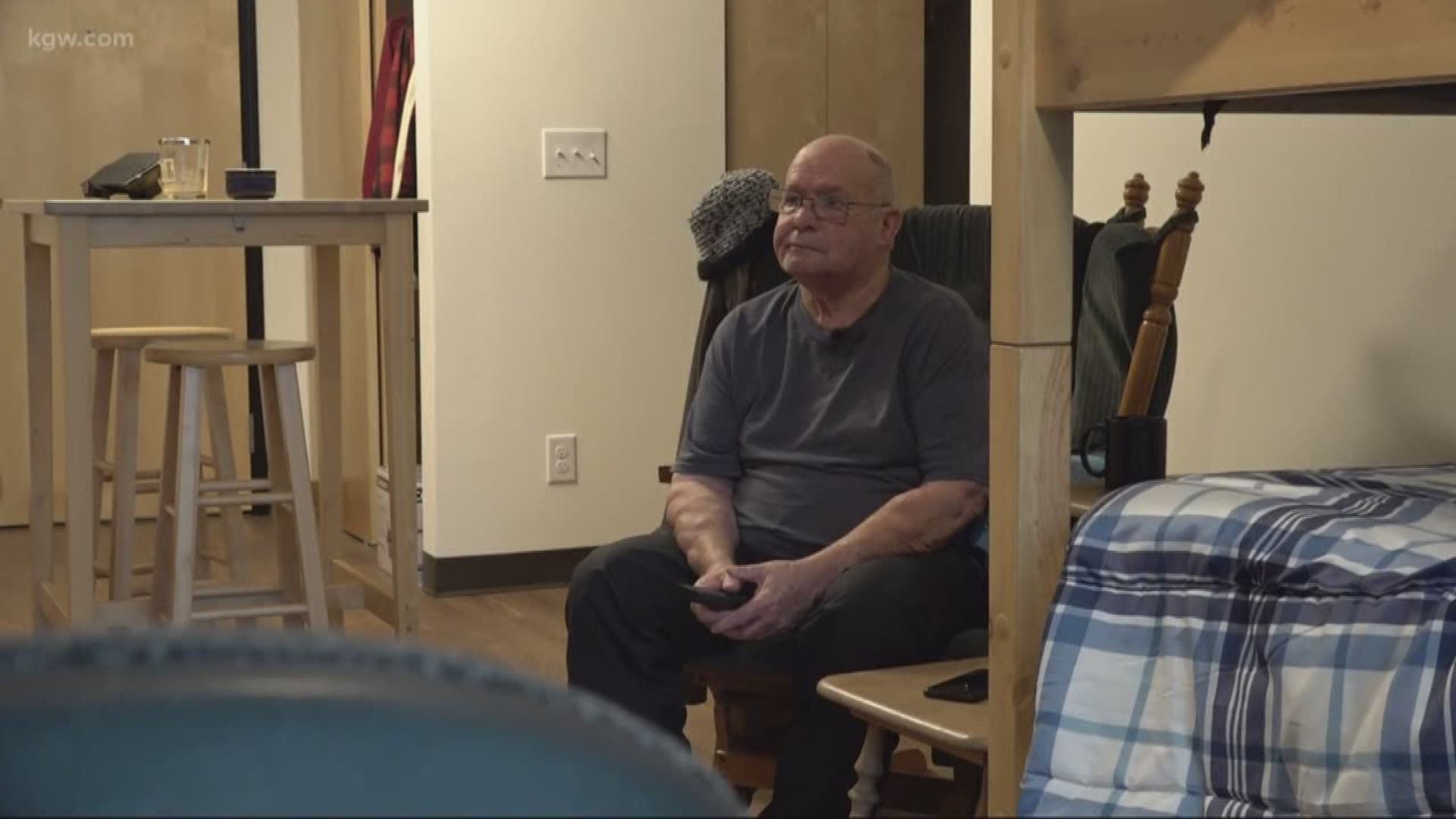 OREGON CITY, Ore. — In Oregon City, a brand-new affordable housing complex is in high demand, filling a deep void as the state continues to experience a homeless crisis.

The project is a collaboration between multiple organizations. It's spearheaded by Clackamas County, which has established a mission to end veteran homelessness in the county, in partnership with Northwest Housing Alternatives and Do Good Multnomah.

“Case management on site, peer support, counseling, mental health providers, someone to be there to help with veterans when they have a crisis,” said Americo Hernandez, Do Good Multnomah’s veteran services director in Clackamas County. “There is trauma, and it's just understanding that trauma.”

“I love it. Got my own place,” resident Alvin Wilson said. “I feel lucky to be here. I sure am.”

It’s a place he can forever call home.

KGW talked with Alvin Wilson in early November 2019 at Veterans Village, a transitional housing complex for homeless vets in Clackmas County, also run by Do Good Multnomah. Prior to living there, he had stayed in an overnight shelter and lived in his daughter’s car with her and her children.

At the time, he was getting ready to move into his new home at Clayton Mohr Commons. Alvin has now been in his new one-bedroom apartment two-and-a-half months; already, he feels he’s grown.

“It’s a lot better. We can have our families over to spend the night,” Wilson told KGW. "At the Village you couldn't

He put bunk beds in his living room for his grandsons, who live in Vancouver and visit often. He loves to cook and is a “cleaning fanatic.” His apartment is spotless and he’s constantly cooking for the staff, his family or his neighbors – something he hasn’t been able to do in years.

Until November, he hadn’t had a place to call his own for six years.

“It gives me courage. Wanting to take care of myself better because I've got my own apartment and do what I want to do,” Wilson said.

Clayton Mohr Commons has 24 units and currently houses around 40 people. The project was made possible through grants and federal funding.

It is fully subsidized through U.S. Department of Housing and Urban Development housing vouchers and it's fully focused on veterans. Tenants must apply and income qualify in order to live in the housing complex; veterans who qualify to live here pay 30 percent of what they make.

But Hernandez, a veteran himself, said some tenants have a source of income while many have nothing. So if they make zero dollars a year, they pay zero dollars.

“There are benefits out there for them, but no one is out there are helping them," he said. "There are resources but they don't know how to access those resources.”

Michael Lander and his family live in one of the two-bedroom units. They have a baby girl and recently relocated to Oregon.

They found themselves in and out of motels and their car for a month, struggling to make ends meet and find an affordable place to live.

“It made me feel relieved,” Lander said of moving into their new home at Clayton Mohr. “I'm grateful for having a roof over my head, even though every day has its challenges.”

“I think this is the solution,” Hernandez said. “I have noticed a drastic change already from when we opened up to now.”

Now the veterans have a roof over their head, fellow vets they can relate to, and a place to call their own.

“We help each other! And that's what it's about: Veterans helping veterans,” Wilson said.

Veterans make up a big percentage of our country's homeless population, and in many areas the crisis is only growing. Clackamas County said in October it is home to the third largest veteran population in the state.

The good news: the latest point-in-time count shows a decline in homeless veterans there.

But a different story is playing out in Multnomah County where the most recent point-in-time count shows veterans made up around 12 percent of the county’s homeless population, an increase from 2017.

In Multnomah County, community organizations like Do Good got 560 homeless veterans into permanent supportive housing in 2018.