Buehler laid out his seven-point plan, which includes building 8,000 new shelter beds with $10 million from the general fund. 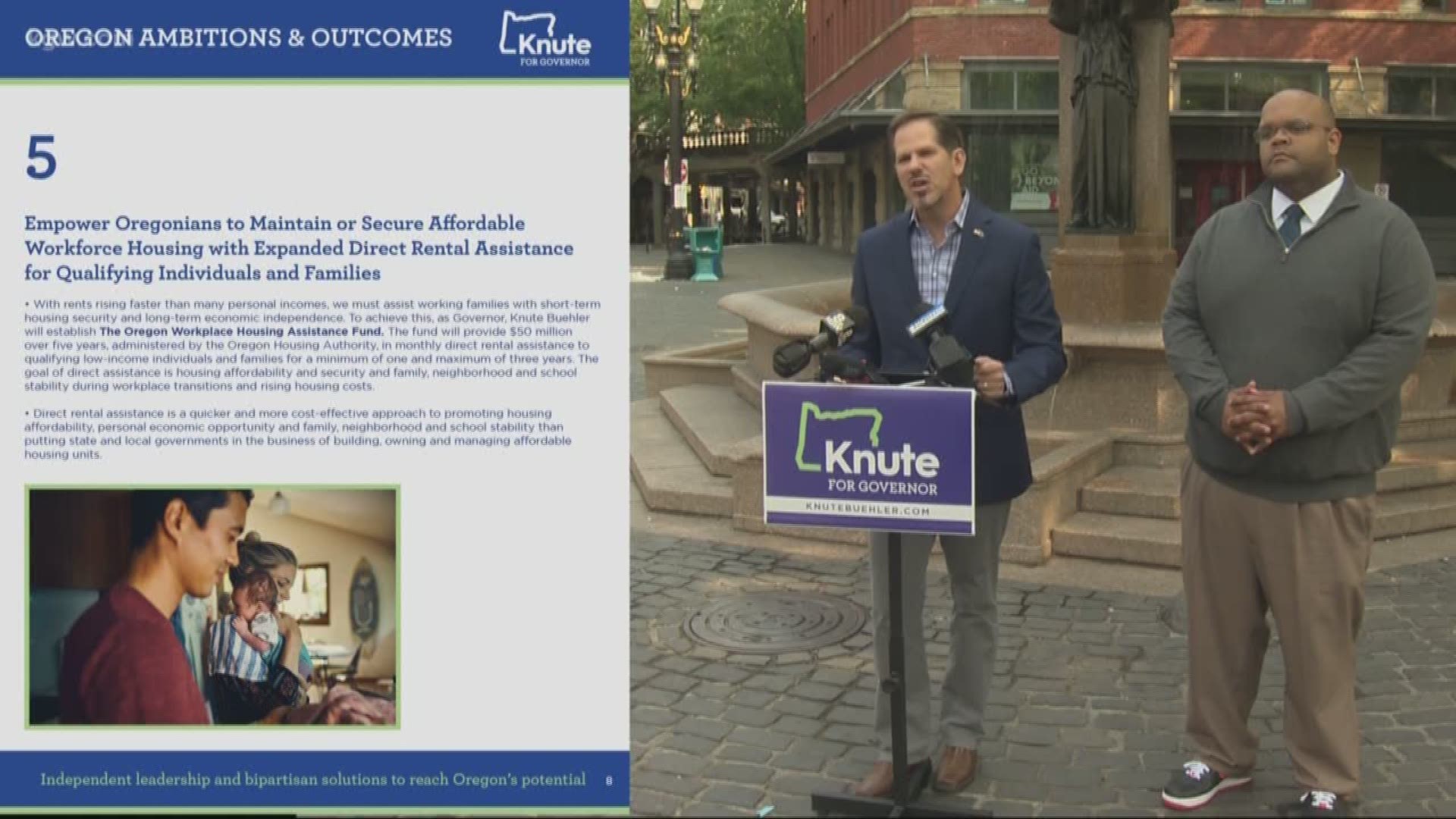 State representative Knute Buehler is proposing to end “unsheltered homelessness" in Oregon by 2023.

“It’s an ambitious goal but I'm confident an achievable goal,” said Buehler, during a news conference in front of Old Town’s Skidmore Fountain, Monday. “Homelessness in Oregon is getting worse.”

Buehler said he would enact his plan if elected governor. The Republican candidate is running against democratic incumbent, Kate Brown.

Buehler laid out his seven-point plan, which includes building 8,000 new shelter beds with $10 million from the general fund.

“Ten-million dollars out of a $22 billion dollar general fund budget will be an easy thing to achieve,” said Buehler. “If we can't find it, we can get rid of something like the political donation tax credit which costs us $12 million.”

“After I'm sworn in, on my first day I'll establish a Chief Homelessness Solutions Officer who'll report directly to me,” said Buehler “This is not a democrat or republican issue—it's a societal issue.”

Gaston said Gov. Brown is committed to allocating $300 million in new resources while building and preserving more than 4,000 affordable homes for children and families.

“Ensuring every child sleeps with a roof over their head by increasing emergency rental assistance, ensuring domestic violence survivors and their children have a safe place to sleep,” said Gaston. “She will also increase funding by $20 million for permanent supportive housing to help the chronically homeless get off the streets and increase access to addictions and mental health treatment and other critical medical care.”

“If [homeless campers] don't want to be able to build responsibility and move onto personal independence, then yes, they will be involved in our criminal justice system.”

Some people questioned that philosophy, including Ricky, who was camped out on a downtown sidewalk Monday afternoon.

“Some people choose to sleep on the street,” said Ricky.

“It's like it would be against the law to be homeless,” said Ricky’s friend, Tabitha. “I don't like that.”

Neither does homeless advocate and executive director of Street Roots, Kaia Sand.

“There are folks who are afraid of going into shelters for a number of reasons including layers and layers of trauma,” said Sand.

Last year, KGW interviewed 100 people living on the street for the documentary, Tent City USA. Nine out of 10 campers told us they preferred living in tents over shelters for a number of reasons. Sand says forcing campers to feel differently is not the solution.

“I think anytime in which the idea of a solution to homelessness is connected to a criminal justice solution, we're just going in the wrong direction,” she said.

KGW asked Buehler for his response to the suggestion that being homeless is not a crime.

“Yeah, it's clearly not a crime,” said Buehler. “What's a crime is not taking advantage of the compassion and the ability to create responsibility.”