'A full meal for someone': Portland Burrito Brigade on a mission to feed those in need

On Sunday, a handful of volunteers prepped, cooked, and wrapped about 500 burritos to help feed hungry stomachs in Portland. 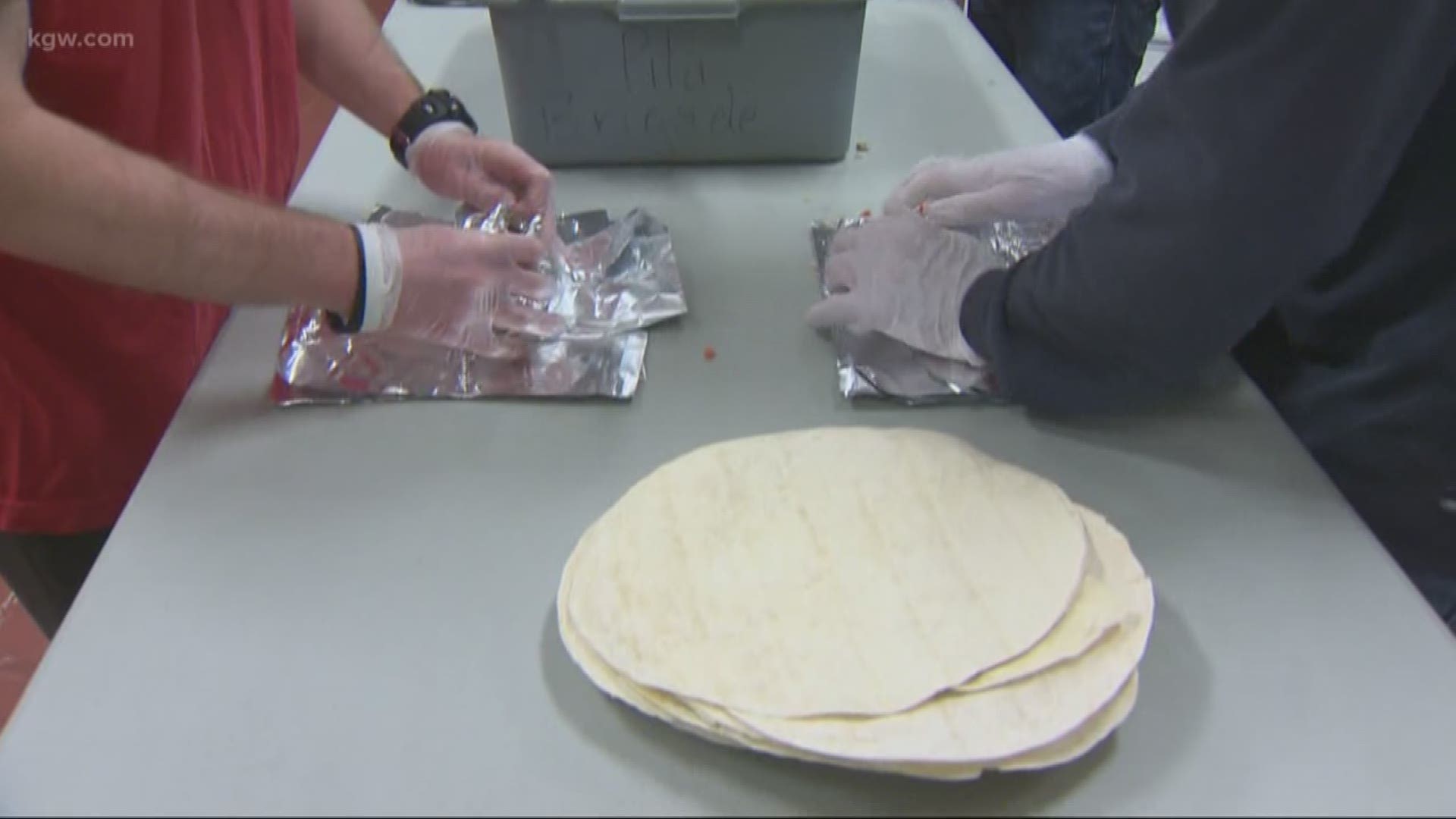 PORTLAND, Ore. — Once a month, the kitchen at Sunnyside Community Center in Southeast Portland becomes the home base of the Portland Burrito Brigade. Volunteers roll up their sleeves and then roll burritos to help those in need.

"I think everyone loves a burrito, but also, it’s a really transportable food. You can wrap it in foil. So, they’re really easy to hand out as a food item that makes a full meal for someone," Burrito Brigade organizer Ashleigh Brantingham said.

Sunday a handful of volunteers prepped, cooked, and wrapped about 500 burritos to help feed hungry bellies in Portland.

"Our core mission as a group is that food is a basic human right and so part of that is that everyone deserves to eat a healthy, warm, home-cooked meal," Brantingham said.

"It can seem like a really daunting task to make 500 burritos, but I think what makes it possible is to have a lot of people helping at a lot of different stations," organizer Foster Seybert said.

After the chopping and prepping is finished in the morning volunteers then hit the streets. They spread out throughout Portland hand-delivering warm vegan meals to people experiencing food insecurity or homelessness.

"It’s very easy to kind of see someone and just walk by, especially in Portland where we do have so many people living on the streets," Brantingham said. "And because it’s very easy to ignore them and not acknowledge them as people, I think it’s really important to have groups like this that kind of bring everyone together."

That personal delivery is part of what makes this program stand apart from others. Organizers hope it helps give volunteers a better understanding of the people they’re trying to help.

"When you go out and actually hand somebody a burrito and actually talk with them, even for a few seconds, I think it really helps people build that empathy and understanding, that the person you're talking to is another human being, just like you," Seybert said.

The program began in Eugene, Oregon in 2014 and has served more than 150,000 burritos there since its inception. It’s been in Portland for about three years and started out of a volunteer’s home.

Now, they’ve expanded to Sunnyside Community Center and hope to be able to impact as many people in Portland than the Brigade in Eugene.

"There are a ton of people who are either food insecure or are unhoused and don't necessarily know where their next meal is going to come from. So, it's really important, as a community, to come together and help those people," Brantingham said.

The Portland Burrito Brigade is always looking for volunteers. There are multiple shift options and volunteering opportunities; from chopping and cooking to distribution.

The Portland Burrito Brigade operates on the second Sunday of every month. It was moved in May because of Mother’s Day.