Mayor Shane Bemis said in his resignation letter he wants Travis Stovall, a black Gresham entrepreneur who's served on TriMet's board, to run for the seat. 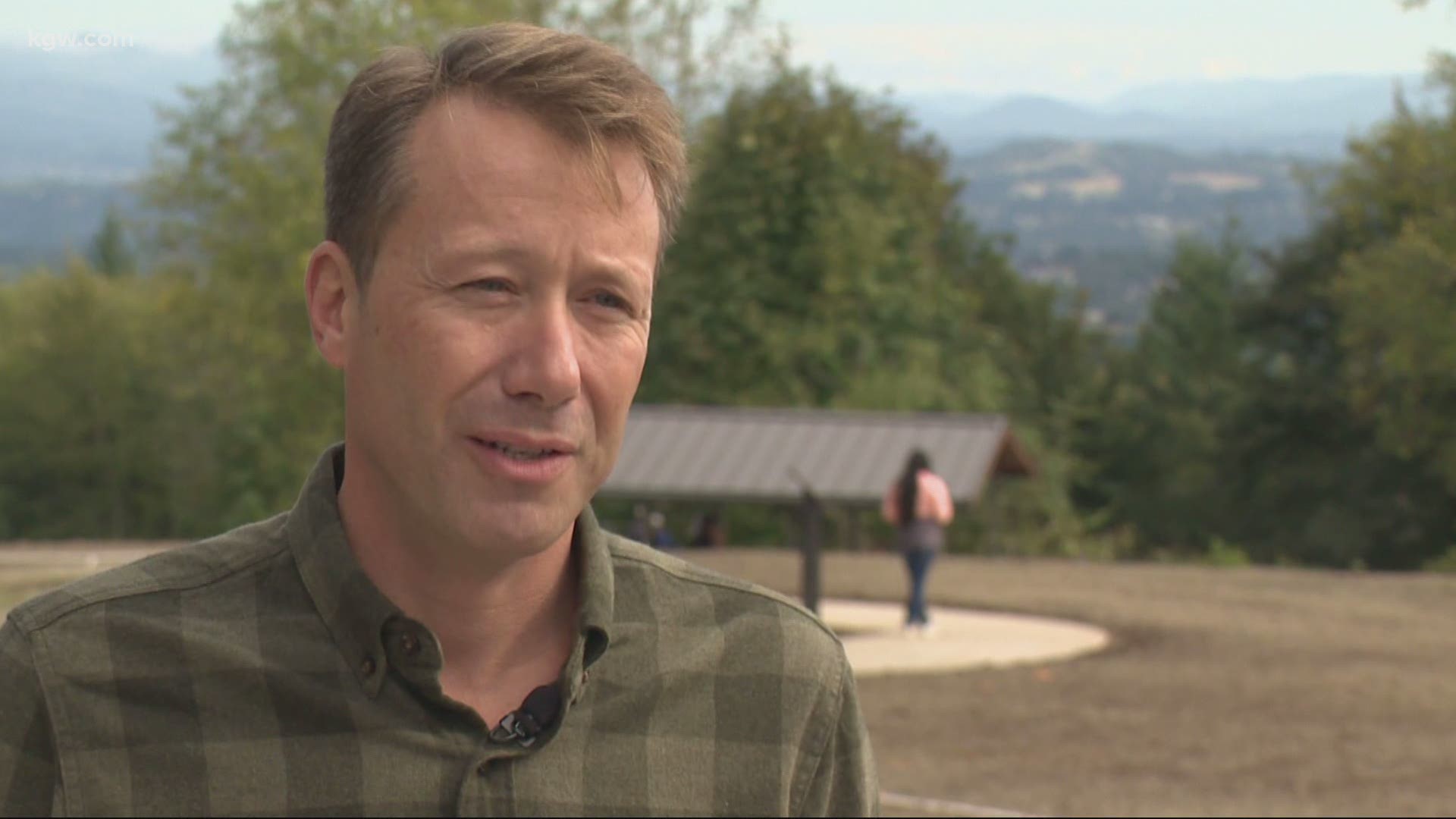 Bemis' resignation comes within days of both the police chief and city manager leaving their respective jobs. Since Thursday, city manager Erik Kvarsten and Police Chief Robin Sells have stepped down. Both said they were retiring.

The resignations come during a time in which allegations of racism within city government have surfaced. Deputy city manager Corey Falls, a black man, sent an internal letter to city leadership that called out racism and lack of support for him and other employees of color.

"My reception into the city of Gresham has been at best dismal," Falls wrote. "It was very clear to me that those in (leadership) were not going to accept or support a black man in a leadership position."

Sells sent an email Sunday to city officials saying she'd been pushed out of her job because Falls accused her of racism.

According to The Oregonian, which obtained Sells' letter through a public records request, Sells said her family gave her a gnome statue as a present when she started as chief. Some officers took the statue and posted it in different locations as a prank. While the statue was still missing, Sells wrote that she told a crowd at an awards banquet, "it's time to return my gnome, as gnome lives matter also." Sells wrote that Falls called the remark racist.

"I truly wanted to stay and ride this out, but in this day and age, somehow truth doesn’t matter and I felt pressured to leave," Sells wrote.

"I am not a racist. I do abhor lazy people, who get paid for not doing a job they are hired to do. That’s not racism!!! That’s called accountability." In the letter, Sells criticized Falls, saying he'd done little in his role as deputy city manager.

Falls wrote in his letter that he submitted plans for police reforms in 2017, but none were implemented. "People of color at the city of Gresham have been impacted and harmed by subtle racism," he wrote.

For Bemis, he wrote in a lengthy Facebook post announcing his resignation, that balancing his job while keeping his restaurant Boccelli's afloat has proved too daunting. The downtown Gresham restaurant has been closed to sit-down diners since March because of the coronavirus pandemic.

Bemis said in his resignation letter he wants Travis Stovall, a black Gresham entrepreneur who's served on TriMet's board and other Gresham city committees, to run for the seat.

"The best possible outcome for our city right now requires a leader like Travis to help navigate our way to a better and more just future, with our strong connections intact on the other end," Bemis wrote.

Bemis held the position as he and other suburban Portland mayors, including Beaverton's Denny Doyle and Hillsboro's Tom Hughes, became more prominent among the metro area's leaders. The growth of each city dictated more seats at the table for those politicians when transportation and business issues were discussed. Hughes eventually became Metro Council President while Doyle remains in the Beaverton post, where he's engineered an ongoing transformation into a more urban center.

In Gresham, Bemis led the state's second-largest city as it attracted more businesses, such as a large Subaru distribution center, and developed such mainstays as the area's only Boeing plant.

Serving the City of Gresham for the past 18 years is the honor of my lifetime. I have watched this community grow in beautiful ways over my two decades of elected service at the local level. We developed parks, paved streets, deployed programs for children and families, and enhanced services across the organization. The community also grew more diverse, which has enhanced our city in every possible way, with a wide variety of lived experiences adding to our vibrancy, and with schools that look like the world our children will actually enter. I have always felt that if the American experiment of belonging and representative democracy could work in a community as racially and economically diverse as Gresham, it could still work on any scale -despite the struggles we face nationally.

I still believe this to be as true today as it was when I first ran for City Council in 2002 as a 29-year-old kid. Gresham has become a big city, but it’s also a big idea. What we have done here and what this community has meant, are bigger than just a municipal corporation providing core city services. As an idea, Gresham is as noble as any ever ventured, and I’m amazingly proud of who we have become.

And while I’m confident in Gresham’s destiny, I’m also very familiar with the challenges we face locally, and broader as a nation. Locally, with a global pandemic, we face significant budget issues, which are compounded by one of Oregon’s lowest tax rates hampering the organization for decades. More broadly, this pandemic threatens the physical and economic health of our residents, disrupts services, and threatens small businesses across America.

As a restaurant owner, I feel the latter impact profoundly. Our family restaurant has been closed to dining service since March. We were well structured to survive normal and even significant ebbs and flows in business, but nobody in the industry could anticipate or plan for what we currently face. To be honest, I’m fighting for the business to survive.

For months, I’ve tried to balance the pressing daily needs of the City of Gresham with my business and my family. My oldest son just graduated from Gresham High School. He was four-months-old when I was first elected to the City Council. Juggling these challenges is always difficult, but the call to public service has been worth the challenges and sacrifices. At the current moment, facing a pandemic, a rising, powerful, and necessary social justice movement, and the City’s budget woes, all while trying to keep my business afloat, is not tenable.

While it is the most difficult decision I’ve ever faced, the current day demands that I must fight for my business to provide for my family. To do so, I have chosen to resign as Mayor, effective Wednesday, June 17, at 9:00 am.

Resigning my position now means that the Mayor’s seat will be up for election this November. For years, I have implored my friend, Travis Stovall, to run for City Council or consider running for Mayor. Travis has been intricately involved in the City of Gresham, serving on committees ranging from public safety, to affordable housing and community development. He’s also represented Gresham on the TriMet Board and started an entrepreneurial business in Gresham.

Travis is also a black man. I watched Portland Police Chief Jami Resh show courage and leadership last week when she announced that she was stepping aside in recognition that the right leader for this moment was somebody else. As a political leader, it is always tempting to see oneself as the solution to whatever problems we may face. However, when I spend time in self-reflection and consider the entirety of the critical work our city and broader society must address, I need to be willing to say I am not the best solution to these specific problems. It is in that spirit that I publicly urge Travis Stovall to run for Mayor this November, and I endorse him strongly should he choose to do so.

The best possible outcome for our city right now requires a leader like Travis to help navigate our way to a better and more just future, with our strong connections intact on the other end. While I have pushed very hard for public safety reform and new approaches, and believe strongly in this work, this is a time in our nation’s history when we all have to ask how we can best help push the critical causes of change and justice. In that exploration, we must also be open to the idea that doing our best, at times, calls us to not try to lead from the front, making way for new leaders. Now is that time for me.

I thank you tremendously for the incredible honor of serving as your Mayor. I came to Gresham as a 15-year-old kid. My family had nothing, and I knew nobody. This community has given me everything. You’ve given me a business, a family, a purpose, and an opportunity to spend my good years trying to enrich and edify our collective destiny. I will never forget your generosity and I will always do everything in my power, in any capacity, to give everything I have to this community.

In the coming days, I’m going to focus hard on trying to save our family business and see my oldest son off to college. While this will capture my immediate attention, once again, service to others remains my chief objective, and this action, in this moment, is not the end of my work in public service.

Public service can be a lonely endeavor, but I’ve never felt alone in Gresham because your kind letters, emails, cards, and prayers have always given me confidence in our work. Please know that I continue to pray for our community, your families, and your health, safety, and prosperity. With my deep and profound gratitude, God bless you all.