Grant McComie shows us a man who makes sure native songbirds get more than a simple roof over their heads: they get a bird resort for a home. 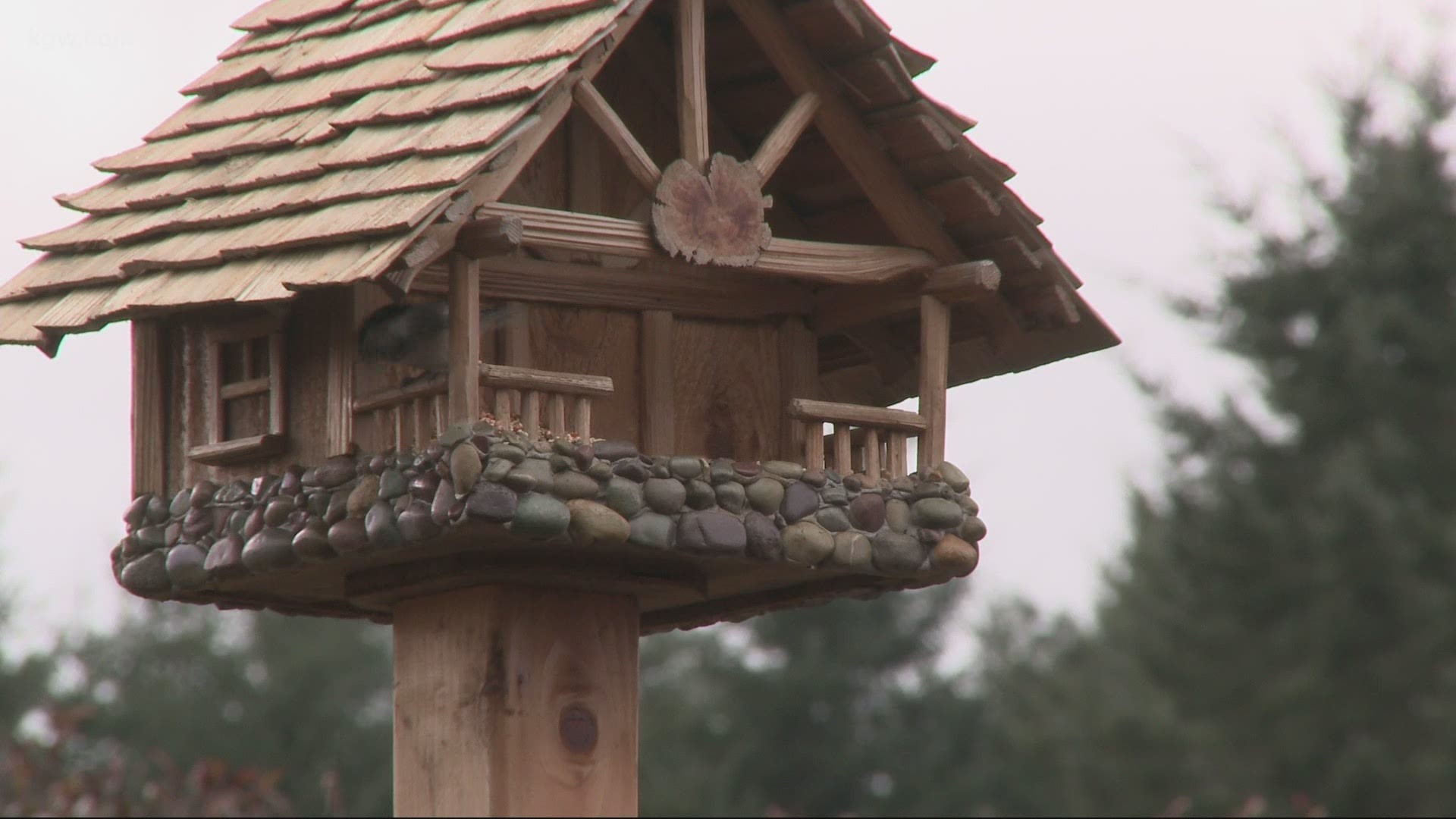 PORTLAND, Ore — Birding is popular outdoor recreational activity for many Oregonians, whether it’s watching for varied species, filling a feeder or even building songbirds a home!

There’s quite an outdoor show for those in the know as Oregon’s wild places are prime at this time of year - rain or shine. Places like Sauvie Island Wildlife Area are at their showy best.

”No better time of year,” I like to say as eagles soar or waterfowl dive, and it gets even better at places like Smith–Bybee Wetlands when you’ve got an expert who shows the way for a walk on the wild side.

“It may be wet, it may be cool, but it’s not freezing and there’s lots of food for the birds,” noted James Davis, wildlife author and teacher.

Davis is an accomplished wildlife expert who wrote the comprehensive “Northwest Nature Guide.” He said folks don’t have to travel far to find wildlife at this time of year.

“There are hundreds of thousands of ducks, geese and swans and hundreds of raptors coming to and through the heart of the Willamette Valley.”

It’s hard to imagine a better place to watch the show, but Davis added that there are many easy to reach sites that could be considered “close to home,” like the Tualatin River National Wildlife Refuge in Sherwood.

It offers a wonderful visitor center and two miles of easy trail that combine to put you in touch with wildlife that’s practically as close as your own backyard.

“This is the South for half a million birds. We have a warm, mild, wet climate that is great for them. But many people think, ‘Well it’s cold here, why would they come here?’ Well, just imagine what it’s like in northern Manitoba right now? Brrrrr!”

Spectacular shows are easy to come by in winter; not just the huge flocks of waterfowl or solo raptors like hawks and eagles, but also the smaller songbird species.

In fact, consider attracting wildlife species like songbirds into your own backyard.

Hillsboro resident, Dennis Frame, loves the sights and sounds of the wild, so he builds feeders and houses for native songbirds.

Washington County resident, Irene Dickson, has two of Frame’s beautiful yet functional feeders, and each is firmly planted in the ground on fence posts 6 feet off the ground in her yard. She said that they “really work.”

“They add such pleasure and peace,” said the avid bird fan. “They’re real de-stressors too. Plus, the resort detail is fabulous and impressive with the little rock walls, benches and other details. It looks like a little cabin by a lake.”

Frame is a builder of human homes by trade, but in his cozy and well-organized carpentry shop, he said his greatest pleasure comes from crafting elaborate bird resorts.

“This is my little getaway, and I can come in here and get away from it all and get creative too.”

He’s a fan of simple, rustic log cabin style homes and will often scour the countryside for “models” that he can reproduce on a small scale for the birds.

“I’ll drive and spot one and maybe snap a photo or two, make a mental note and then create it in a bird house.”

Frame has been "chippin’ away" at his hobby for 25 years and said it‘s the tiny details that impress most people.

The resorts sport stone and mortar chimneys, decks with handrails and small pieces of character that set them apart from ordinary store-bought models, including a wooden front door.

“The door actually opens. I do that because you must clean out the resort following each nesting year. In fact, the birds seldom return the following year unless you do that. I try to make it an easier job.”

Frame also trades, barters and salvages for everything – recycling for the birds!

On top of that, he rarely sells a house; instead, through the years, he has given them away to nonprofits like his local rotary club and the Jackson Bottom Wetlands Education Center. The groups then sell Frame’s bird resorts and raise hundreds of dollars to support their educational programs.

“This is my way of giving back to the community. I believe in community; they help me out, so I help them out. And getting people out of their houses and learning more about the outdoors is a positive way to go in my book.”

You can reach Dennis Frame via email: hackum@comcast.net

My next book, “Grant’s Getaways: Another 101 Oregon Adventures”, will be published in 2022.