The Portland Police Bureau released surveillance videos of the shooting shortly after the grand jury's decision was revealed. 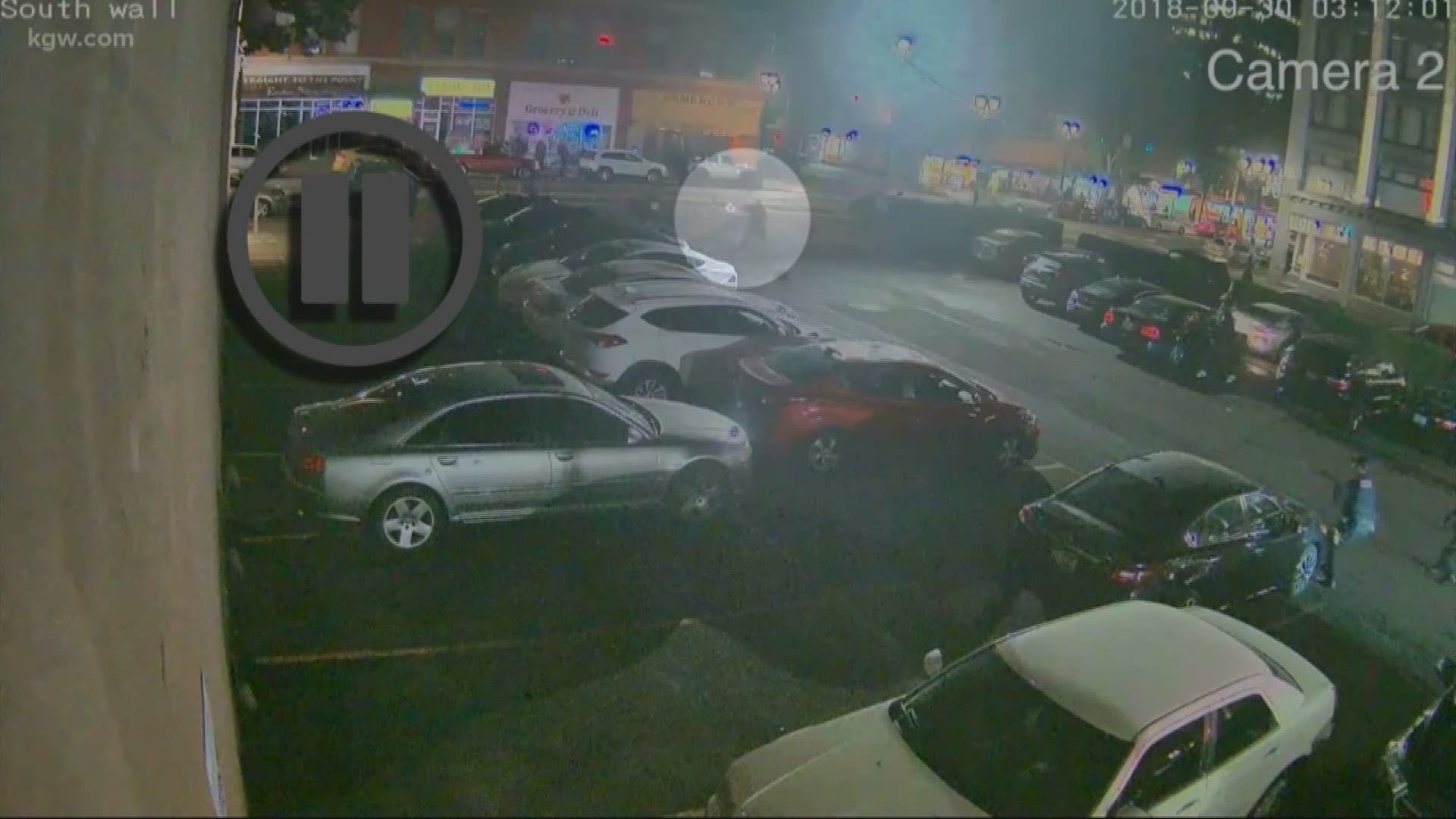 PORTLAND, Ore. — After two days of testimony, a grand jury returned a ruling Wednesday that two Portland police officers were justified in the use of deadly force in the fatal shooting of Patrick Kimmons.

The grand jury ruled that no criminal prosecution against the officers is warranted and that the use of deadly force by Sgt. Garry Britt and Officer Jeffrey Livingston was "a lawful act of self-defense and/or defense of a third person," according to Oregon law.

On Wednesday, a protest broke out in downtown Portland after the grand jury ruling was released. Family members and others blocked streets, held signs and shouted Kimmons' name.

One driver was arrested after police said he drove his pickup truck into the crowd and struck a protester. Mark A. Dickerson, 55, faces charges of fourth-degree assault, reckless driving and reckless endangering. The protester did not need any medical attention.

Kimmons, 27, was shot shot nine times in Southwest Portland and pronounced dead at a hospital on Sept. 30. The state medical examiner ruled that he died of multiple gunshot wounds.

The Portland Police Bureau released surveillance videos of the shooting shortly after the grand jury's decision was revealed.

In the video, a person is seen firing a gun at a group of people and then running across a parking lot into the path of officers Livingston and Britt. The person runs between two cars away from the officers and the officers fire multiple shots. The person then falls to the ground.

WARNING: The content in the videos may be disturbing to viewers

The family of Kimmons was allowed to view the video before it was released, police said.

"Though we recognize the community's desire to review the information in a timely manner, we also waited to release this information until the family of Mr. Kimmons was briefed and shown the investigation and video," said Portland Police Chief Danielle Outlaw. "We recognize this is a difficult time for many and wanted to ensure the information was presented to the family first."

According to Portland police, Sgt. Britt and Officer Livingston were providing extra patrol on Sept. 30 in a part of downtown Portland where there had been gang-related violence when they heard gunshots.

Two men had been fighting, and Kimmons shot them, seriously injuring both, police said.

Kimmons then began running toward Britt and Livingston and other bystanders with a revolver in his hand, the police said.

He ignored commands to drop the weapon, and the officers opened fire, according to police.

Officer Charles Asheim, a gang enforcement officer, arrived at the scene immediately after the shooting and told investigators he recognized Kimmons as a member of a gang.

One of the two other men shot was a member of a rival gang, he told investigators.

The Multnomah County District Attorney's Office said they will file a motion Wednesday with the court to release a full transcript of the grand jury proceedings. The officers or their attorneys have 10 days after the state files its request to move for a protective order against the release of the transcript.

The Multnomah County Circuit Court Presiding Judge will decide if the transcript is released.

The Portland Police Bureau said it is conducting an internal administrative investigation of the incident. After the investigation is complete, it will be presented to the Police Review Board. Portland police said they expect that investigation to be completed within the next 10 weeks.

The Portland Police Union released a statement in response to the grand jury findings:

On September 30th, two Portland Police officers faced the most dangerous of circumstances. An armed and dangerous active shooter, who had seconds earlier fired his gun at a small crowd of people, advanced towards officers while still armed with his gun. The officers had mere seconds to react to the deadly situation that continued to threaten the lives of innocent bystanders as well as their own. They fired their weapons to protect our community.

Much of the anger directed towards the Portland Police Bureau and its officers has been fueled by false narratives. Fanning the flames of emotion through misinformation doesn't help uncover the facts; nor does it help our community understand what happened that early Sunday morning.

We have now heard from a Multnomah County Grandy Jury made up of our own community members. After an extensive review of the evidence, that Grand Jury determined that the officers' use of deadly force was justified.

As the Police Bureau releases the evidence, including surveillance videos of the incident, and as the Multnomah County District Attorney releases hundreds of pages of grand jury testimony, we must stop the spread of false information. Instead, we must take an honest, objective look at the evidence. Our officers did exactly what the community asks of them; they acted to stop a person who posed an immediate, deadly threat to our community.

Any loss of life is tragic. And we understand and appreciate the public's interest whenever officers are faced with the difficult, split-second decision to defend the public and themselves against an armed person. Our officers work tirelessly every day to protect the public, to stop crime, and to prevent the loss of life. However, there are times—like the incident on September 30th—when officers are faced with no other reasonable option but to use deadly force.