Like scores of other Oregon rivers, the Nestucca River once had huge runs of steelhead because it was heavily planted with fish from other river basins. 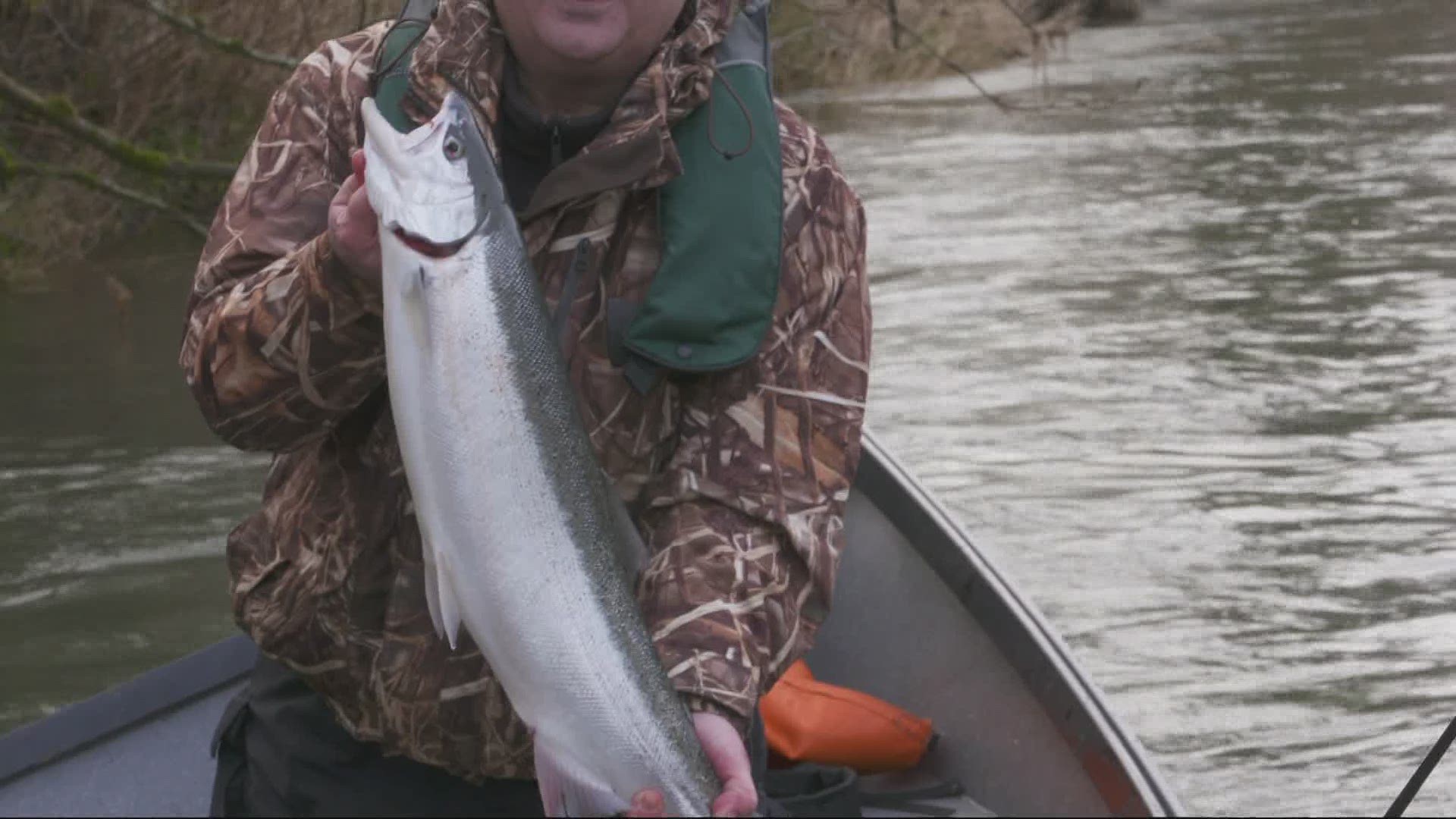 TILLAMOOK COUNTY, Ore. — If there is a stronger Oregon fishing tradition than drift boat steelheading, I really don’t know what or where! The silver-sided ocean going rainbow trout are sought by anglers who often face challenging winter-spring cold and wet conditions to catch the prized fish.

Many steelhead devotees call them the “street fighters” of the anadromous fish world because they travel the farthest and endure the harshest environmental conditions to reach their spawning areas located in the highest points of the watershed.

The Nestucca River in Tillamook County is filled with rapids and places where gorgeous sun streams meet the water’s rhythm. It’s where I recently joined two longtime northwest anglers – Jack Smith between the oars and Buzz Ramsey casting bait, who get away from it all to support an idea they brought to life 25 years ago: Oregon’s Broodstock Steehead Project.

Photos: The Godfathers of Broodstock Steelhead

Like scores of other Oregon rivers, the Nestucca River once had huge runs of steelhead because it was heavily planted with fish from other river basins.

“Well, that was wrong and for many reasons,” offered Ramsey, an icon of the Pacific Northwest fishing scene. “We noticed over time that if you had successive generations from the same out of basin brood, the fish weren’t very robust. If you had real good ocean conditions, they would come back pretty strong. But if you didn’t, there were hardly any returning adult fish. To me, that was a big reason to go to broodstock fish from the same river. To have fish more like the wild fish that return to freshwater from the ocean and also have the potential for a higher rate of return and a higher percentage of large fish too.”

As volunteers, Jack and Buzz partnered with Oregon Dept of Fish and Wildlife in 1996 and started the idea on Tillamook County’s Wilson River.

The two fishermen have been so dedicated to the project that they have earned the nickname, Godfathers of Broodstock.

Their idea was simple enough: catch and collect a limited number of wild adult steelhead (up to 55 pair each season) and keep them alive inside an aerated aluminum box inside the boat.

Each box has an aerator that runs off a battery and will hold several steelhead for a few hours. On the Wilson River, anglers can continue fish downriver to a drop off point where they can put the fish in a large collection pond.

On the Nestucca River that collection tank is at the Cedar Creek Hatchery and on the Wilson River that drop-off point is a large holding tank on private land. The landowner allows access to anglers who participate in the Broodstock Project so they can place their fish in the tank.

Smith offered, “It’s a well-known site that’s right on the river and the fishermen can easily drop off the fish they catch. Plus, the hatchery crew can drive to it and easily transfer the fish into a truck with an aerated tank and then drive to the hatchery. It’s handy and a win for all involved.”

As Smith explained the tank’s purpose, local fishing guide Nick Popov arrived on the scene with a freshly caught 12-pound wild steelhead that he placed in the collection tank.

“This is why I participate” he offered. “Our younger generation has to provide for a future generation so my kids and grandkids can fish too. That’s why I do it and my clients buy into that idea too. In fact, they really enjoy it!”

Popov glanced over to see Smith and Ramsey standing nearby and he exclaimed, “Hey, there are the Godfathers! The two of them – and ya know, we wouldn’t be here now, doing this, if they hadn’t started it all.”

Up to 53 pairs of wild Wilson River steelhead are transferred to the nearby Trask River Hatchery each season for the propagation process.

Hatchery manager, Jim Skaar, said that each female will carry up to 3000 eggs. So, hundreds of thousands of the broodstock baby steelhead are produced at the hatchery each season.

"All of our hatchery fish have their adipose fins (a smallish, half-moon shaped fin located between the dorsal fin and the tail) clipped as smolt before they're released from the hatchery and swim to the ocean,” explained Skaar. “That allows the anglers to determine them as hatchery versus wild steelhead when the fish return from the ocean in three years.”

The broodstock baby fish carry the same genetic characteristics as their parents, and so they are better adapted to the river they originated from and their survival rate is higher too.

The Nestucca and Wilson broodstock steelhead progeny average a 6% return rate as adults, according to Skaar. He added, “That’s far higher than the 1% return from previous out of basin steelhead progeny that we have produced.”

Skaar pointed with great pride to the new Trask River Hatchery as a place open to visitors and he invited folks to see the new $3.1 million facility.

The new hatchery, (after more than three years of design and construction) replaces the old hatchery that was built a century ago. In fact, the concrete foundation of the old hatchery building is crumbling, and the walls are weak due to rotting lumber. (This is a location that receives more than 120 inches of rain a year.)

The new facility is a real prize for the local community as it boasts more than 10,000 square feet of space for hatchery incubation ponds, expanded tray systems and a new water filtration and plumbing system.

Trask River Hatchery was originally sited to take advantage of the reliably cold and clean water that flows from nearby Gold Creek – a tributary of the Trask River. The facility relies on gravity fed water that means they do not need to pump water – that has meant a cost savings that’s paid off through the decades.

Inside the facility, there is new office space, residential housing for hatchery employees and of keen interest to local folks, a common space that will provide a fine meeting site. Featured prominently on the facility’s walls are many gorgeous Oregon photos by local landscape photographer, Jared Juarez, (his father is local Tillamook fishing guide, Tim Juarez.)

“Our vision for this facility is a place to hold our stakeholder’s meetings or local hunting and fishing group meetings. It is a place for the entire Tillamook community, and I think people will take great pride in what we have accomplished here. We want to share this with our community.”

Back on the Nestucca, Ramsey pointed out that the broodstock idea of enhanced propagation with native adult fish has spread across the region. In fact, as many as ten Oregon rivers now have a Broodstock Project based on a simple idea: more fish, better fisheries.

“There’s been a lot talk recently about wild fish versus hatchery fish. Well, we embrace wild fish protection because we love our northwest salmon and steelhead and what they represent for quality habitat – the same habitat that people use or rely on too. We also want our hatchery fish because we want to catch one and perhaps take a fish home occasionally.”

As Jim Skaar and I chatted, my bobber sank out of sight. I suddenly had my hands full with a gorgeous and feisty fish. The fishing rod doubled over and throbbed with the pulsing fight of a silver sided nine-pound steelhead. This one was also a hatchery steelhead and it was a keeper.

“Ohhhh, nice fish...man oh man it’s gorgeous,” I shouted. As the line screamed off my spinning reel, I announced for the all the world to hear, “I’ve got a real barn-burner on my hands.”

Jim smiled and I laughed – but it was nervous laughter to be sure. I did not want to lose this fish!

Within moments, I played the fish to the boat and soon it was within easy reach of Jim and his long-handled net.

As Skaar slid the net under the fish, he said, “This is our goal – let’s do that a lot more… they don’t make ‘em a whole lot shinier than that – that is a brand-new fresh fish from the ocean: Nestucca River broodstock hatchery steelhead!”

The Oregon Dept of Fish and Wildlife is a good resource for learning the ropes of steelhead fishing – they even have a web page dedicated to teaching you more.

You can also visit Trask River Hatchery and  Cedar Creek Hatchery to observe the brood stock steelhead and learn more about the program.

For more information on purchasing an Oregon Angling License and locate an Oregon Fishing Guide.