The teens will talk about real, firsthand experiences they’ve had with issues such as peer pressure, body image, gender identity, and depression. 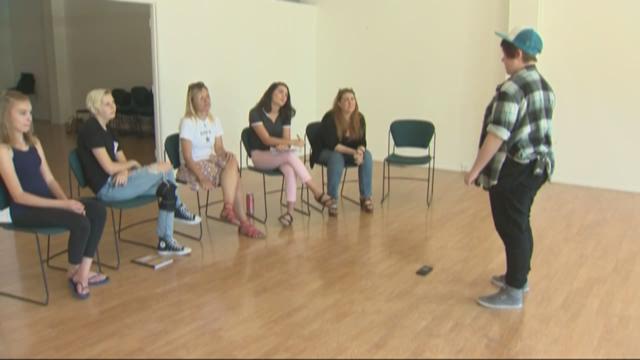 VANCOUVER, Wash. -- In Vancouver this week, a group of teenage girls are gearing up to take the stage and roar.

“I feel like I’m going to vomit, just thinking about it,” said 15-year-old Antoinette Hastings, laughing.

Hastings and four other girls, ages 12-16, are putting on the inaugural performance of “Girls Roar," an all-girl storytelling group.

She and her cast mates have been practicing their pieces for weeks, each preparing to talk about real, firsthand experiences they’ve had with issues such as peer pressure, body image, gender identity, and depression.

“Everyone's kind of speaking their own truth, and I think if there are adults in the audience, you know, who have kids and teenagers. It's going to hit them like a truck,” said 16-year-old Olivia Dalton. “It's going to be like 'Oh my God, wait. My happy kid has been through stuff?’ Like that's completely new to some people.”

“Girls Roar” is the brainchild of Erika Worth. A lifelong performer, Worth founded 'ROAR' -- an all-female storytelling group for women, a few months ago.

“The women I know are vibrant, and they're from all over the world and they’re all different faiths and sexual preferences, and I wanted to get their stories,” she said. “So I woke up with the word ‘roar’ in my head.”

Since that revelation, Worth has hosted a series of storytelling workshops and stage shows at Vancouver’s Kiggins Theater.

Then, she had a thought. If the goal is to empower women, start young. With that, “Girls Roar” was born.

On Thursday, Worth’s first five recruits, including Hastings and Dalton, will also take the stage at Kiggins. They range in age from 12 to 16, and none of their families or friends have heard their pieces.

“I’m more nervous about the people I actually know who are going, than the strangers,” said Hastings. “A lot of them doing actually know my story, so it's weird.”

On Saturday, four of the five recruits came together for one of their last presentation workshops. They said the process of crafting their stories has been hard, but come Thursday, they think it will be worth it.

“Why not quit?” Dalton said. “Because someone needs to say something.”

“Girls Roar” is set for 7 p.m. Thursday, July 27, at the Kiggins Theater in Vancouver. Tickets are $15 in advance and $18 at the door. For more information, click here.