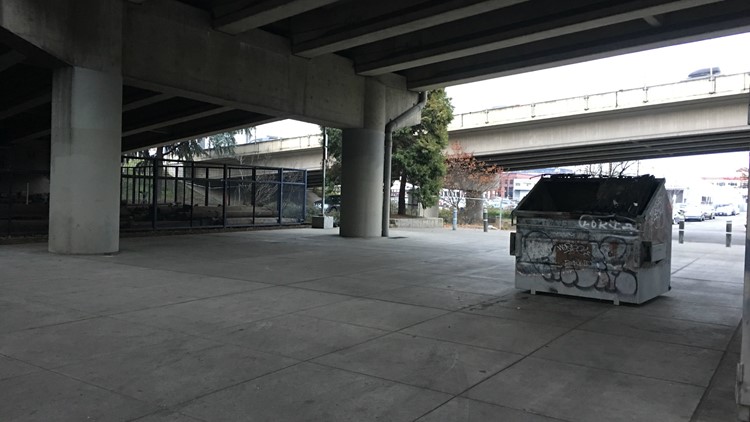 Photo by: Lindsay Nadrich
The location where a homeless man was run over by a garbage truck in Southeast Portland.

PORTLAND, Ore. — A garbage truck drove over the legs of a man who was sleeping underneath a tarp early Monday morning in Southeast Portland, police said.

According to police, the driver knew the tarp was there but didn't know a person was under it. No arrests have been made or citations issued at this time.

Officers responded shortly after 4 a.m. Monday to a report of a pedestrian-involved crash on the Eastbank Esplanade at Southeast Salmon Street. When they arrived, they found a man suffering from severe injuries to his legs. He was treated by medical crews at the scene and then taken to the hospital.

Investigators learned the man was sleeping under a blue tarp on the walkway between the street and the Esplanade. The driver emptied a dumpster into his truck and then backed up over the victim as he drove away.

Tuesday, other homeless individuals were lying in the area just feet from where the man was hit.

“Scary, wonder what number I'm gonna be,” said Ted Messer who is homeless and frequents that area.

Messer said he has been homeless for three years and worries something similar could happen to him. He said he has had several near misses in the past.

The location where a homeless man was run over by a garbage truck in Southeast Portland.
Lindsay Nadrich

The man hit Monday is still in the hospital. However, he is not the first homeless person hit.

In November, a homeless woman was seriously injured after getting hit by a driver in Portland while she was sleeping in her tent.

In August 2019, another homeless woman in Eugene was hit and killed by a garbage truck while she was wrapped in her sleeping bag in a parking lot. Two days later, two homeless people who were sleeping on a sidewalk in Southeast Portland were hit by a car and seriously hurt. In July, another homeless man was killed by an Oregon Department of Transportation worker who was mowing the grass in a fenced off area in Southern Oregon.

“We want to remind drivers, community members, that a tarp on a sidewalk nowadays means that somebody could be living underneath it,” explained Portland Police Sergeant Brad Yakots. “We have community members that are houseless that use the tarps to stay warm at night and we do not want drivers to disregard a tarp.”

Sgt. Yakots said both drivers and people experiencing homelessness need to be aware of their surroundings.

“We would like to remind our houseless population if they are setting up camp, the proximity to the roadway, try to stay away from the roadway as much as possible,” Yakots explained.

Police are investigating, but said this appears to be an accident. Even so, the garbage truck driver could still face charges.

“Unfortunately, yes, given the circumstances of any type of incident, and what the investigation finds, even if it’s an accident, there’s no mal-intent, you could still be looking at a criminal citation or a violation,” Yakots said.

The company the driver works for said this is something their drivers worry about because they have had other incidents where people have been found sleeping behind dumpsters, in boxes next to them, or under tarps. The company said this is a reminder for their drivers to be extremely careful and it is a responsibility they do not take lightly.

The incident is still under investigation. Several potential witnesses left the scene before talking to officers, police said. Anyone who witnessed the crash and has yet to speak with police is asked to call 503-823-3333. Reference Case No. 19-412683.