Portland police advised community members in the area of two competing protests in downtown Portland to leave for their own safety. 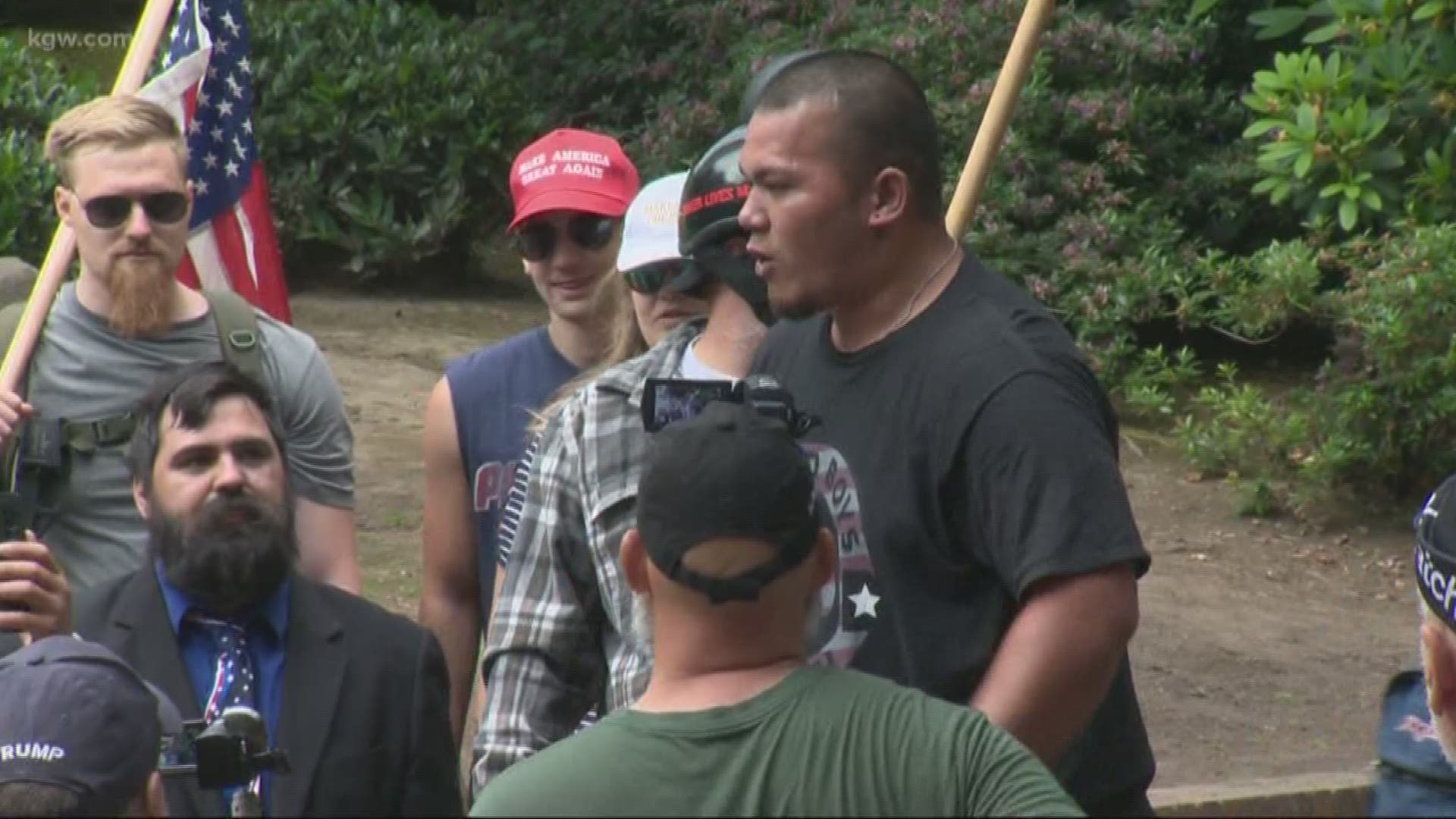 On the KGW News app? Tap to see a multimedia article

Bryan A. Neyman, 26, was arrested for fourth-degree assault and third-degree robbery. Jonathan D. Feit, 36, and Andrew Arbow, 32, were both arrested for second-degree disorderly conduct. Gregory N. Isaacson, 43, received a federal criminal citation for failure to comply with a lawful order and was then released.

Police said there were multiple fights between protesters, and officers confiscated weapons from demonstrators who gathered Sunday afternoon at Terry Schrunk Plaza and Chapman and Lownsdale Squares.

Officers have observed multiple fights at today’s events. People are encouraged to leave the area for their safety due to the violent behavior of demonstrators at Terry Schrunk Plaza and Chapman and Lownsdale Squares.

Multiple rallies were planned for Sunday in downtown Portland. The first, an anti-police brutality rally organized by Direct Action Alliance and Empower Portland, began at 2 p.m. at Chapman Square.

Officers continue to observe people participating in violent behavior. Weapons have been confiscated from protesters. Fireworks and bottles have been thrown at officers and participants. pic.twitter.com/SKLf85CDLK

KGW's Lindsay Nadrich said police in riot gear showed up around 4 p.m. when things started to get violent. One demonstrator was taken away, bloodied and in zip-tie restraints.

Things are starting to get violent downtown at the protests. Police in riot gear just arrived. pic.twitter.com/PmrftEqipl

As things calmed down, the officers in riot gear walked away. One man was taken away bloody & in zip tie restraints. pic.twitter.com/oAoDCGEDeO

The groups have moved down the street. Police are still working to keep them separate. pic.twitter.com/mC5eB5NDOn

Someone threw a firecracker into the crowd. Police then had someone on the ground. pic.twitter.com/jENgqbbhov

Elijah, who was part of the earlier protest against police brutality, says someone from the Patriot Prayer group sprayed mace on him. He used Maalox to stop the sting & a woman who calls herself a street medic gave him a wet cloth to wipe it off. pic.twitter.com/xGmL2zNRge

Things started to calm down later Sunday evening as police were able to mostly keep the two groups separated. At one point, both groups marched around the block, after which they reoccupied their respective spaces on opposite sides of the street and resumed yelling back and forth at each other.

The protests ended around 7 p.m.

Both groups walked around the block and are now back where they started, standing across the street from one another, yelling back and forth. pic.twitter.com/EBmlsZLcG9

Members of Antifa followed the Patriot Prayer group down to the water. Portland Police separated the two groups again just outside the Rose Festival. pic.twitter.com/XUN4xaScIb