A former Naval officer shares what he can about his time aboard the submarine. 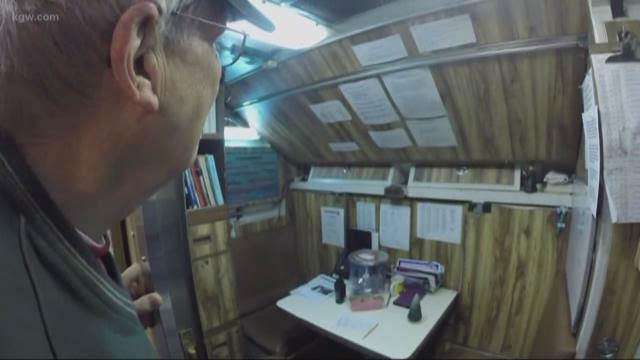 PORTLAND, Ore. -- For former Naval officer John Towle, it's nice to be back on the USS Blueback.

The submarine was built in 1959 and decommissioned in 1990 before it was donated to OMSI. It has floated beside OMSI in the Willamette River since the mid-1990s. The sub is Towle’s old stomping grounds, from more than 40 years ago.

“Very nostalgic to come back to this wonderful, wonderful boat,” Towle said.

Towle, who is now 79, served on the submarine for a few months in 1970 when he was 32 years old. Just this year, he visited for the first time over Thanksgiving. He made another trip to the sub on Tuesday.

He did a lot in the few months that he was serving on the USS Blueback, but exactly what he did is a little unclear.

“It was classified. So that's about all I can say about that,” said Towle.

While some of the details of his stint on the Blueback were off limits, he could talk about some of his fondest memories.

“I can talk about the camaraderie. Very special people, we had a lot of fun together. We joked a lot. That kind of takes away from the pressures aboard,” Towle said.

There was substantial pressure, especially in such close quarters, and conducting clandestine operations.

“She did a lot of seal operations, a lot of intelligence gathering operations,” explained Michael Stephens, a veteran who served in the Navy for 20 years. He’s now OMSI submarine tour guide.

He said what sets the Blueback apart is its hull shape, which was cutting edge for 1959. The tear drop hull shape allowed it to outperform the rest.

The sub was also the last diesel submarine built for the U.S. Navy before submarines went nuclear.

While the Blueback’s capabilities are impressive, what Towle treasures most is the camaraderie, cribbage, and hot meals he shared with crew mates. He hopes younger generations realize the important role submarines play in history.

“If you don't remember the past and don't study it, then you're destined to repeat it,” Towle said. “You need to learn the lessons and mistakes of the past to make the future become meaningful."

Towle spent 21 years in the Navy. He said the captain of the USS Blueback waws his favorite captain to work with.

The submarine has gone everywhere, from San Diego, to Hawaii, to Japan where Towle served for a time.

He said when he got his feet back on dry ground after serving on the Blueback, he only had a couple days to make it to Chicago for his wedding. Fortunately, he made it.

“I beat feet from Japan to Chicago, Illinois to get married,” Towle said.

OMSI submarine tour guides say the Blueback has made a brief appearance in the movie "The Hunt for Red October," and it's also been in a TV show.