The move is a win for vape shops and a setback to Oregon health officials who are trying to tackle the national epidemic of vaping-related illnesses. 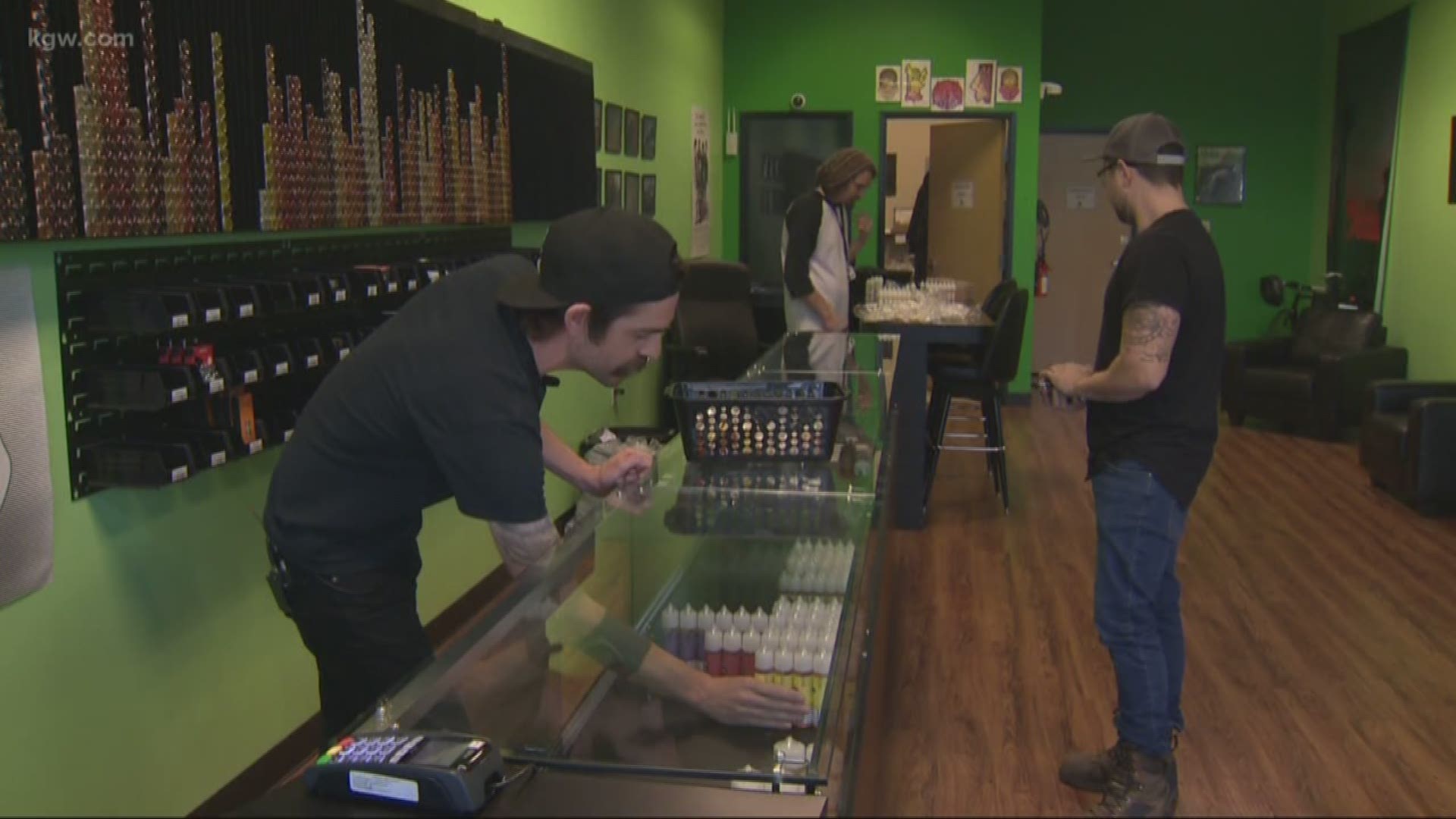 The ban, which started on Oct. 15, still applies to THC vaping products.

"Today I have to stock all the shelves that I unstocked Tuesday morning," said Nick Downing who is the manager at Emerald Vapors on SE Foster and 82nd. He said he's confused about what will come next and relieved to have a job for "the next little while".

The move is a win for vape shops and a setback to Oregon health officials who are trying to tackle the national epidemic of vaping-related illnesses.

According to the Centers for Disease Control, 33 people have died and more than 1,500 people have been diagnosed with vaping-related illnesses nationwide. This includes two deaths and nine illnesses in Oregon.

The CDC, FDA and state public health authorities are still digging into exactly what's causing people to get so sick. But what we know so far is THC is present in most of the samples tested by the FDA and most sick patients report a history of using vape products with THC.

Investigators have found products with THC, especially those off the street or from other "informal sources" are linked to most of the cases.

Since Gov. Brown announced her executive order earlier this month, vape shop owners who only sell nicotine products have worried they would have to close abruptly over the next few weeks due to lack of sales. Flavored vape products make up a huge portion of their business.

In a filing Wednesday seeking judicial review of the temporary ban, a vaping industry group called Vapor Technology Association, along with several vape shop owners, said they would “suffer severe and irreparable harm." They also said it would destroy the state's vape industry.

In a statement, Oregon Health Authority (OHA) said they encourage businesses, despite the stay, to voluntarily keep flavored vaping products off the shelves to protect Oregonians.

The vaping industry group argues it would heighten public health risks by getting rid of a safer alternative to smoking cigarettes and would push users into the black market.

RELATED: Oregon's flavored vape ban is in effect: are shops following the rules?

KGW spoke with Division Vapor owner Paul Bates, one of the people who filed the motion on Wednesday. He says the state didn't have cause to put this ban in place. Rather than punishing the nicotine vaping industry, Bates believes the CDC should solely focus on THC products as major players in the outbreak of lung sickness.

"Had we not been granted a stay my guys would be out of a job. My guys and gals - ten people - would be out of a job in a week. We'd be gone," Bates said. "We are still under threat all the time and have been for years. And it really is our health authorities failing to get harm reduction right."

Gov. Brown's spokesperson told KGW News: "The court’s decision to enter a temporary stay today is unfortunate due to the ongoing public health threat posed by vaping-related illness. In the meantime, in the absence of action from the U.S. Food and Drug Administration to adequately regulate vaping products, Governor Brown will continue to work with the Vaping Public Health Workgroup, state agencies, stakeholders, and the Legislature to find long-term solutions that will protect the public health from vaping-related illness. Governor Brown continues to urge Oregonians to heed the public health warning of the Oregon Health Authority and to stop vaping immediately."

"The Oregon Health Authority has been informed that the Court of Appeals granted a temporary stay of OHA’s rules that ban the sale of flavored vaping products at retail stores. This decision means the rules are, for now, not in effect; the agency is communicating with its partners, including local public health authorities and other state agencies, that enforcement of the rules will be temporarily suspended.

Governor Brown’s executive order to enact a temporary ban on the sale of flavored vaping products is an evidence-based strategy to prevent youth, as well as adults attracted to flavors, from becoming exposed to the health risks from vaping products and from becoming addicted to nicotine. The recommendations from the Governor and the resulting rules from OHA and OLCC are intended to help our agencies protect the health of all Oregonians. OHA continues to investigate vaping-associated lung injuries, and continues to urge all Oregonians who use vaping products to stop vaping immediately and take advantage of cessation resources. In addition, OHA encourages businesses, despite the stay, to voluntarily keep flavored vaping products off the shelves to protect Oregonians.

The DOJ’s appellate division will be defending the rules and responding to the request for a stay."

"We are very pleased with the Oregon Court of Appeals decision which preserves the ability of hundreds of small businesses to remain open and continue to serve their adult customers while the legality of this regulation can be challenged and evaluated. Bans don't work; they never have.

So, VTA continues to stand ready to work with the State of Oregon, and all interested stakeholders, on the many real solutions that should be put in place that would actually achieve the twin goals of restricting youth vaping, which already is illegal, and preserving flavored vapor as an alternative for adults desperately trying to quit smoking. ”