Over the last year Norse Hall, built in 1928, has been closed due to the pandemic. No money is coming in and bills still need to be paid. 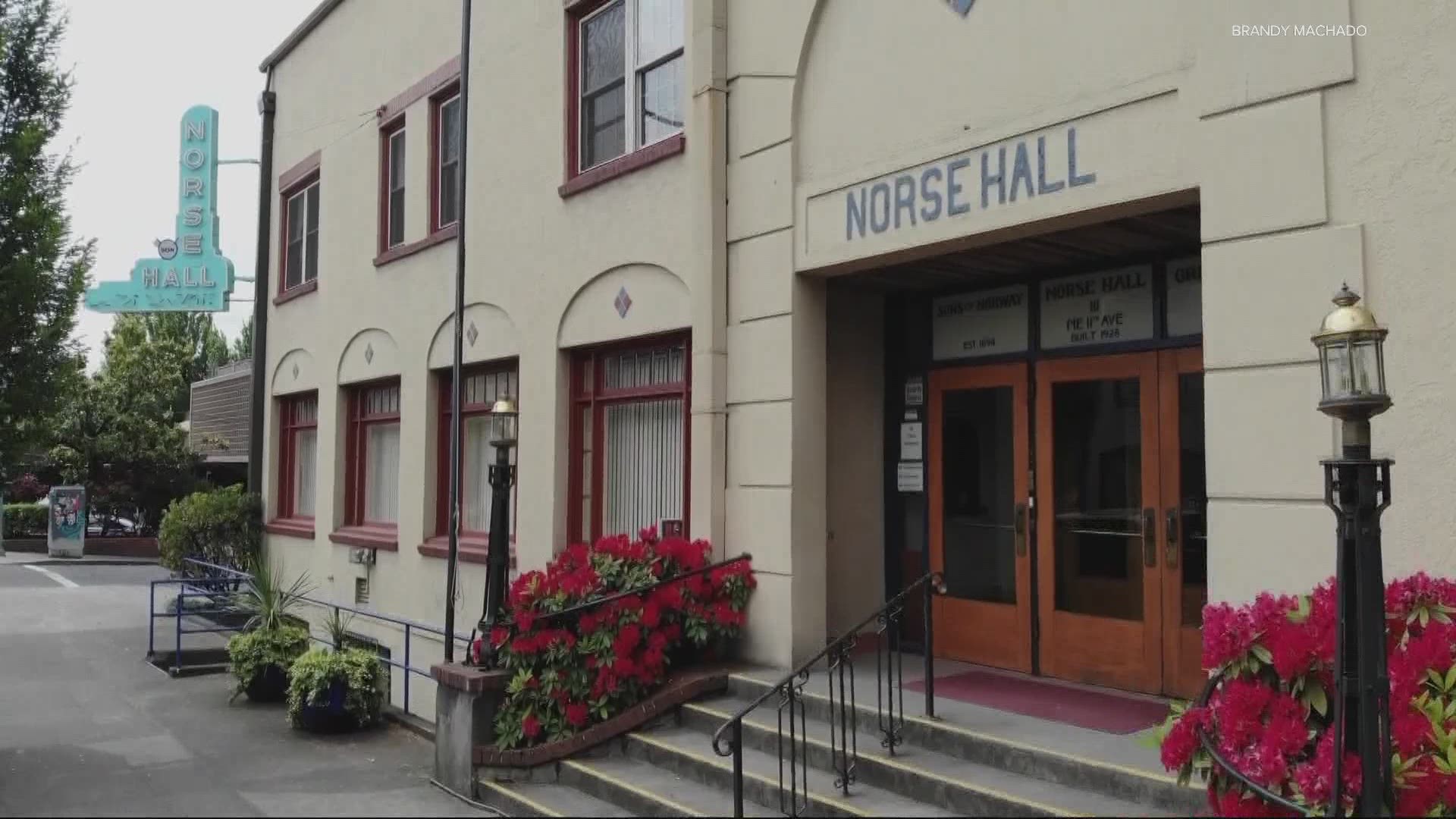 PORTLAND, Ore. — The pandemic has dealt a heavy blow to a number of businesses, that includes the entertainment and dance communities in Portland.

Before the pandemic, Norse Hall in Northeast Portland was busy. People from all over the area came together to dance with one another during weekly or monthly dances.

Kevon Jones is one of many dancers who regularly stopped in.

“I’d be like alright, I’m really stressed out from work. Let me just dance and be with my friends, be able to exercise, and to be able to feel like, creative,” said Jones.

He’d been attending the weekly west coast swing dances at Norse Hall since he was a college student at Oregon State University. Before the pandemic, students would travel all the way up to Portland in the middle of the week to attend the dances.

But over the last year, the historic venue, built in 1928, has been closed due to the pandemic. The nonprofit was already on a tight budget and no money is coming in from facility rentals. The building still needs to be maintained and bills still need to be paid.

"Since renting the facility as an event center is how we fund the operation of the building, our short-term finances have taken a hit. We have been dark for over a year now, our income has been non-existent. But ongoing building maintenance waits for no pandemic and so we have made some adjustments to our budget and our longer-term goals for building improvements," said Tom Hoffman in an e-mail. Hoffman is president of the Norse Hall Association.

“Operational costs per year are about $60,000. When you take into consideration that nobody’s been able to gather there, it’s really quite a loss,” said Mudd.

The moment the GoFundMe went online, dancers across the Portland Metro area jumped into action. In just one week, the GoFundMe has raised more than $20,000, almost half of the $45,000 goal.

Leilani Nakagawa, a Portland-area dancer and dance instructor, said when she saw the GoFundMe, she was saddened but not surprised. She said the last year has been especially tough on the local dance community.

“We’ve been hit really hard and it breaks my heart to see all the studios, there’s quite a few in the area, that have had to close or are on the brink of closing,” Nakagawa said.

She’s been dancing in Portland for more than 20 years and owns Uptown Dance Studio in Tigard.

Credit: Bradford Whelan
Leilani Nakagawa and her husband Joe during a dance competition

She said her studio has only been able to survive thanks to the generosity of people in the dance community who donated to a GoFundMe a local dancer set up for her studio. She hopes Norse Hall receives the same support.

“Almost every dance genre here in Portland had a foot in Norse Hall, meaning they had a dance night or a monthly event or something,” said Nakagawa.

“The main dance floor is, to my knowledge, the largest social dance floor available to Portland now. I’ve heard historians tell me that Portland had something like 50 dance halls in the 30s,” said Johnston.

But these days, the number of dance halls has gone down, leaving Norse Hall as one of the more well-known places to dance locally.

“It’s a wonderful place. If it ceases to be available for dancing it will be a loss to the dance community,” Johnston said.

Norse Hall isn’t just meaningful to dancers in Portland. It has meaning to other communities as well.

“They [Norse] had a lot of cultural events, a lot of Scandinavian and Norwegian events. So, I feel like it would definitely be a huge loss if we weren’t able to go back to that,” said Nakagawa.

“I’m hoping for them to still stay open so I can show up and see my old friends, see some new friends, dance to really good music, and really just have a good vibe because I really need that, like really bad,’ said Jones.

Jones isn’t alone in feeling that way. For many people, dancing at Norse Hall was just as much about dancing as it was about being social.

For Jones and others, not only is dancing an enjoyable pastime, but it’s also beneficial for health and well-being.

“I have ADHD, so I was like ‘how can I channel this in a way that’s healthy’ and dance allowed me to be able to do that and also make something, create something with someone else,” said Jones.

Nakagawa said having a place like Norse has made a huge impact on her life.

“I love that they have so many opportunities to dance. I do a lot of different styles so there were a lot of weeks where pre-COVID I was there multiple times a week dancing west coast [swing] on one night, salsa on another night, ballroom on another night,” said Nakagawa.

“The freedom of movement that dance can bring you. It just, it feeds your soul.”

Norse Hall board members say they’re hopeful and plan to open as soon as it’s safe to do so. The good news is they’ve had eager groups inquire about when they can get back in and use the space.