Made in Oregon: Film office celebrates 50 years of movies

From "The Goonies" to "Stand by Me" to "Animal House," the state of Oregon has a long and rich film history. 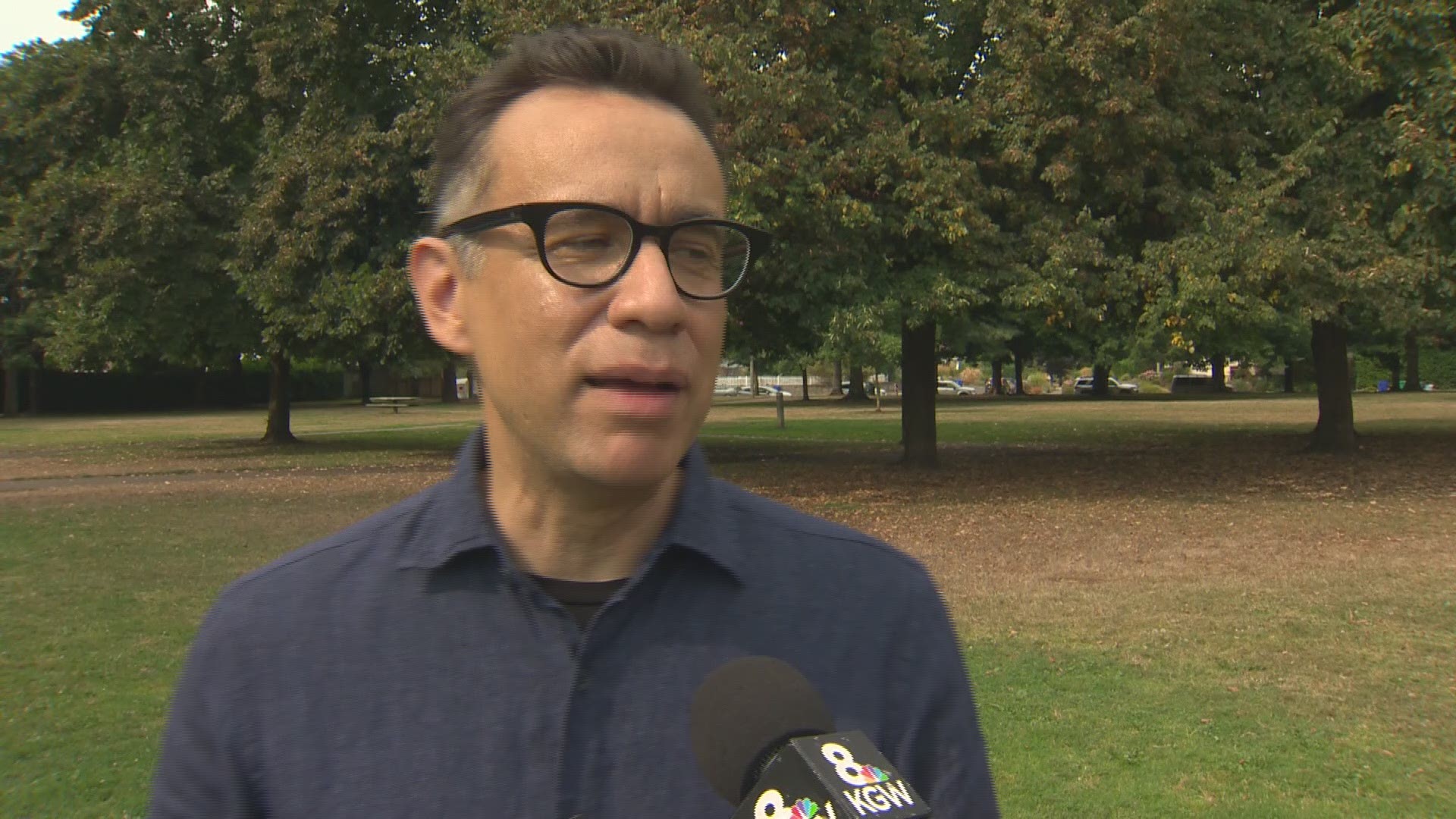 These iconic quotes each come from movies that were filmed in Oregon. Try to name the movie for each quote and the character who said it. Find the answers at the end of this article. We'll start off with an easy one.

The Beaver State was a hotbed for aspiring filmmakers long before 1968, though. That was the year that Oregon Gov. Tom McCall founded Oregon Film to organize assistance for the movie, "Paint Your Wagon," which was shooting in Baker County at the time.

VIDEO: Trailer for "Paint Your Wagon"

The first movie filmed in Oregon actually happened 60 years earlier, when Astoria was used as the production backdrop for "The Fisherman's Bride" in 1908.

Fast forward more than a century and the Oregon film industry is thriving. In 2017, there were more than 18 movies and TV shows produced in the state, according to Oregon Film. According to a 2016 PSU economic impact study, the industry provided more than 3,000 jobs and nearly $160 million in annual payroll in 2015.

What/when was the first film made in Oregon?

I’m told by our friends at the Oregon Film Museum that it was "The Fisherman’s Bride," shot in Astoria and released in 1909, but there are other film historians that believe there was a filmmaking community making films here prior to that date.

How many films/series are currently in production?

This year we have already had productions of Season 2 of Netflix’s “American Vandal” and “The OA,” Season 3 of IFC’s “Documentary Now!” and two pilots — one from ABC and one from Warner Horizon — as well as the animated series “Dallas & Robo” and “Toonami."

Currently and still to come: Season 1 of “Shrill” for Hulu, Disney Feature Film “Timmy Failure,” and Season 1 of a “Pretty Little Liars” spinoff called “The Perfectionists,” a new series from Netflix (still to be announced), an independent series called “In the Vault,” the upcoming Laika animated film “Missing Link” and another animated series called “The Shivering Truth,” and several locally produced features and shorts.

What has been the most commercially successful film made in Oregon?

I’m sure it’s among "The Goonies," "Twilight," "Stand By Me," "Animal House" or even Buster Keaton’s “The General” (if you adjust for inflation).

Editor's note: We did a little research. According to Box Office Mojo's list of the the top 300 domestic grosses (adjusted for ticket price inflation), the most commercially successful film made in Oregon is "National Lampoon's Animal House." It made $141.6 million in 1978, which adjusted for 2018 inflation, would be a total domestic gross of $555.2 million. The only other Oregon-produced film to make the Top 300 was "One Flew Over the Cuckoo's Nest," which made $109 million in 1975, which would be $497.7 million after inflation adjustment.

Which was the biggest flop (or least commercially successful)?

“Paint Your Wagon," [shot in Baker County] was notoriously unsuccessful for its budget level. For better or worse that was the film that gave birth to this office in 1968.

Editor's note: "Paint Your Wagon," which Roger Ebert called "a big, heavy lump," had a $20 million production budget, but its domestic gross was just $14.5 million.

Which film made in Oregon would you say had the largest social impact at the time?

I’d have to go with the same list two answers above, but I’d also add in some significant docs that were produced by filmmakers from Oregon. “How to Die in Oregon” and “50 Feet from Syria," amongst others, had a very distinct social commentary and impact. And of course, “One Flew Over the Cuckoo’s Nest,” had a HUGE social impact.

VIDEO: "One Flew Over the Cuckoo's Nest" You're Not Crazy clip (warning: strong language)

Which has had the most staying power (timeless movie or lasting commercial success)?

For Oregon, that would be "The Goonies." Many people still travel to Brownsville for "Stand by Me" (“Stand by Me Day” is every July 23), and Eugene and Cottage Grove for "Animal House" (there’s a 40th anniversary celebration the weekend of August 18 in Cottage Grove for Animal House). But Astoria literally gets thousands of people a year, The Goondocks, just to visit the town that the film was shot/set in.

Oh, there are many. "The Way West," "The Postman," "Redwood Highway," "Bend of the River," "The Shining" or even the Japanese series from the 80’s called "From Oregon with Love" [or "Oregon kara ai"] for sure. I’m told that Laika’s upcoming feature “Missing Link” features some stunning (albeit animated) Northwest settings. But the one that really has the most “Oregon postcard moments” is "Wild."

You’re going to get a split decision on this. Some say "Portlandia," [but] just as many can’t stand that comparison. "Grimm" and "Leverage" did a great job showing off some not-so-widely known, darker aspects of Portland. I’m also a big fan of the indie series "The Benefits of Gusbandry."

VIDEO: "Portlandia" Dream of the '90s

What was the most exotic (or intergalactic?) place Oregon was meant to recreate in film?

The interesting thing is, unlike Vancouver, B.C., we don’t get many projects that are trying to recreate another location. Things that come here tend to shoot Oregon for Oregon, which is obviously great. But a small series called "Combat Report" recreated Europe in WWII here recently.

What makes Oregon such a great place to produce series and feature films?

The crews and talent, the ease of access to a wide variety of locations, and its proximity to Los Angeles while not being Canada.

Films have been made here since 1908. What spurred the need for The Oregon Governor’s Office of Film and Television 60 years later?

Initially the office was set up to help the production navigate permits and permissions, specifically transportation and trucking, to shoot here. And while we still do a lot of that work, we have expanded into [assuring] that creative, lasting, interesting and living-wage paying jobs are kept here in the state in this industry, and to ensure that our local creative workforce can have access to those jobs and other opportunities. In addition, we work to promote #OregonMade films, products, talent and equipment for this industry outside of the state and try to connect to the marketing power these films and TV episodes have for the state as a whole.

Can you think of an Oregon film that was way ahead of its time?

I recently saw a silent film shot in Athena [and Pendleton] in 1928-29 called "City Girl" and I was amazed by how advanced the filmmaking, subject matter and acting was in that film. I’d love to see a wider audience re-discover that movie.

Do you personally have a favorite made-in-Oregon film or series?

I’m always going to be partial to "Wild" as it is the film that brought me to this job. But I’ve actually seen many, many Oregon Made films and have a reason to love them all. As a matter of fact, as part of our 50th anniversary, we are showing many of them during our #OregonMade Film Series at the Hollywood Theatre.

What’s one more thing you want people to know about films made in Oregon, or about filming in Oregon?

I want people to know that this industry is made up of a large and diverse community of storytellers, actors, vendors, technicians, drivers, caterers, artisans, etc. that are living here and creating product that entertains and markets the state on a worldwide basis. It is a unique place, with unique talent utilizing so many unique locations, that it’s hard not to be consistently surprised and impressed by its output during its 110-plus [years of film] history.