Nearly 500 buildings have been reported as damaged. 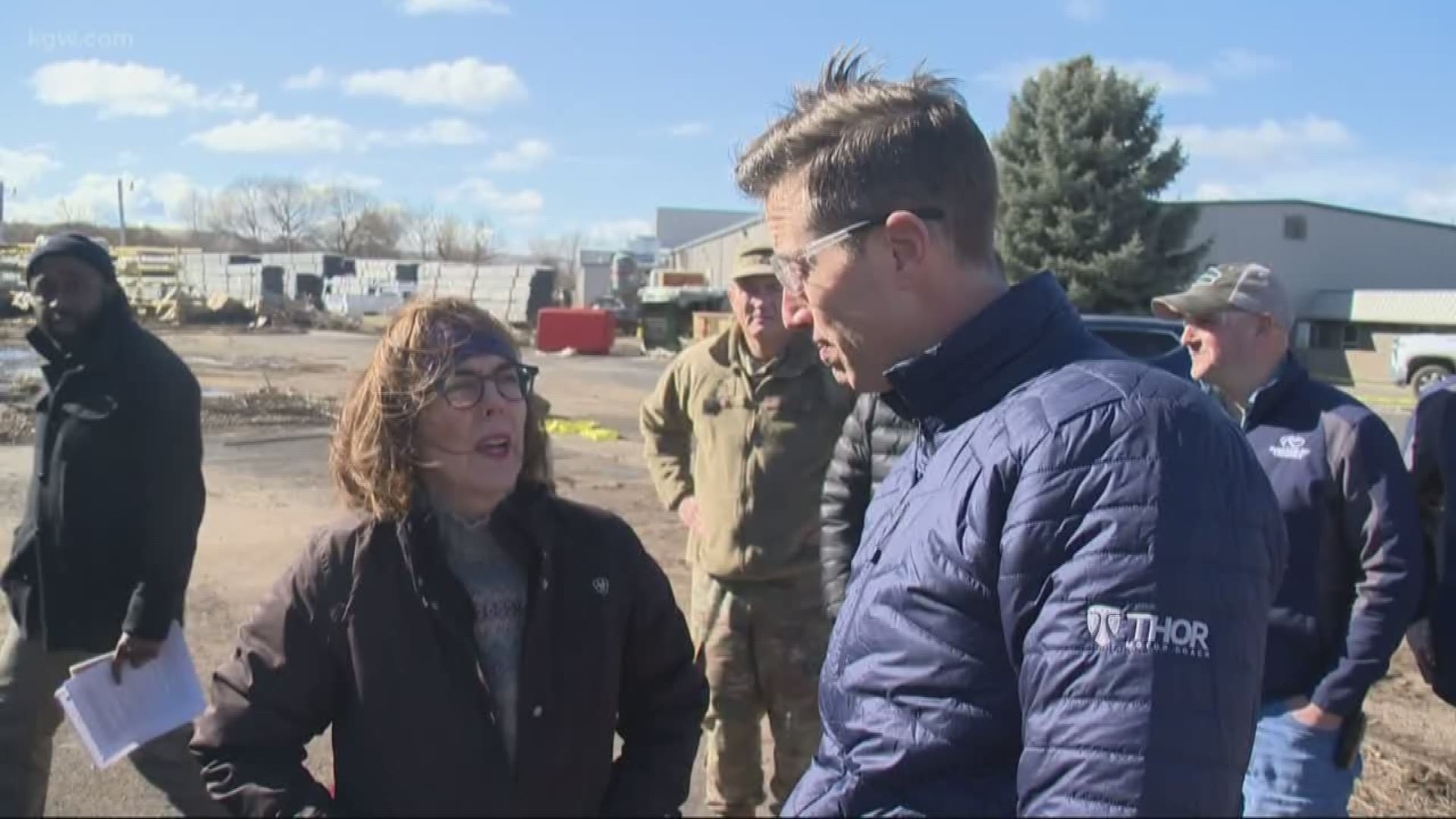 "The damage is extensive and frankly all over," Gov. Brown said after getting an aerial view from inside a National Guard helicopter.

She flew above the hardest-hit areas for around an hour before landing and making her way to one of the levees that broke, causing huge amounts of flood damage.

"We want to get those numbers. We want to see what kind of partnerships we can build, but folks need a warm safe dry place to call home and housing in the region is really tight. So we're looking at whatever tools and resources we have to support the community. To support the region," the governor said.

Nearly 500 buildings have been reported as damaged. One of those was Keystone RV Company near the banks of the Umatilla River.

"There's at least 4-6 inches of mud on the inside," president and CEO of Keystone Jeff Runels told Brown.

The two took a tour around the property. Runels pointed out that 150 of his company's RVs are headed for the scrapyard.

"We'll probably discover more over the next couple of days. Those will all go to salvage and be completely lost," he said.

RELATED: ‘I had to throw everything away’: Pendleton residents assess damage after devastating flood

Some of their 300 employees are helping to clean up the mess. The others are having to wait until the business is operational again. In the meantime, Keystone said they will pay those employees $500 a week for the next 2-3 months.

"We're dedicated to this area, so we're going to figure out how quickly we can get back up and running. A lot of our employees have chipped in to help and they're going to do everything they can," Runels said.

Work at one of the multiple levee breaches is continuing and will take the next 3-6 weeks before it's built back to where it was before river levels crested the banks of the Umatilla.

When asked how much money was needed, a city of Pendleton worker said, "Our estimate right now is $1.8 million, just to do levee work and infrastructure work on this area."

Later in the afternoon, Gov. Brown addressed how the state plans to help.

"We're still in assessment mode and the other piece is roads. In talking with county commissioners, we're talking multiple millions of dollars in damage. I don't know what the feds will reimburse on that," she said.

Brown said the state had a good revenue forecast and should be able to cover the costs of the levee fix until FEMA reimburses the state.

Wells Fargo announced today they will donate $100,000 to help in relief efforts, saying $50,000 will go to the Red Cross and the other $50,000 to CAPECO or the Community Action Plan of Eastern Central Oregon.

RELATED: 'Nobody was prepared for this': Nonprofit collecting supplies for Pendleton flood victims