The man was "out exploring" July 14 when his Jeep got stuck in a dry creek bed about 15 miles from the nearest paved road and he tried to hike out. 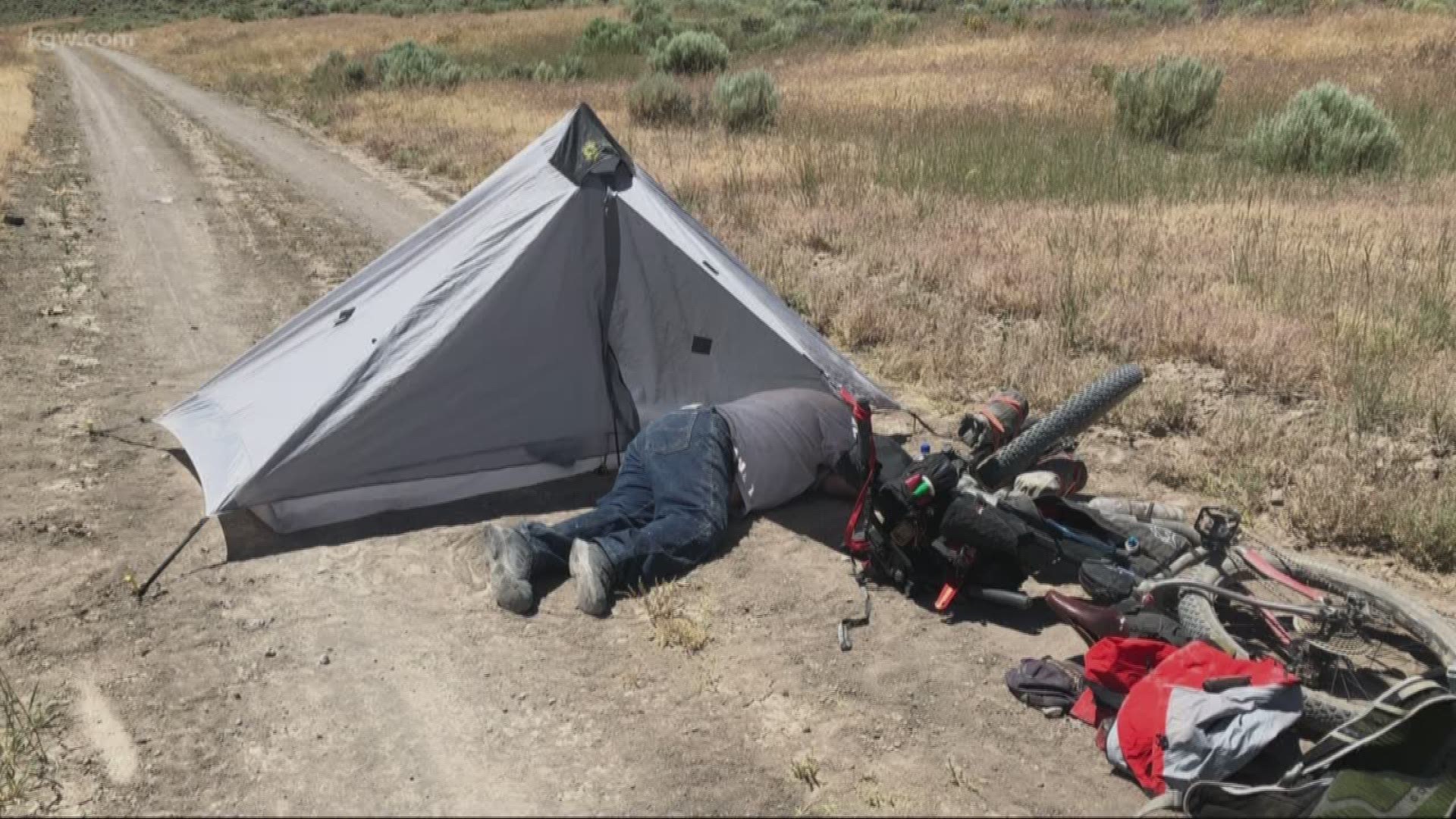 ADEL, Ore. — A 73-year-old man who was stranded in the remote Oregon high desert for four days with his two dogs was rescued when a long-distance mountain biker discovered him near death on a dirt road, authorities said Thursday.

Gregory Randolph had hiked about 14 miles with one of his dogs after his Jeep got stuck in a narrow, dry creek bed. He was barely conscious when biker Tomas Quinones found him on July 18.

Quinones, of Portland, hadn't seen anyone all day as he biked across the so-called Oregon Outback, a sparsely populated expanse of scrub brush and cattle lands in south-central Oregon. At first, he thought the strange lump was a dead cow.

"As I got closer, I thought, 'That's a funny looking cow' and then I realized that this was a man," he recalled Thursday in a phone interview.

"I started noticing that he sometimes would look at me but his eyes were all over the place, almost rolling into the back of his head. Once I got a better look at him, I could tell that he was in deep trouble."

Randolph was horribly sunburned, couldn't talk or sit up, and could barely drink the water Quinones offered him.

Quinones hadn't had a cellphone signal for two days, so he pressed the "SOS" button on a GPS tracking device he travels with in case of emergency.

He sat with Randolph, unfurling his tent to provide shade as they waited. A dog — a tiny Shih Tzu — emerged from the brush and Quinones fed it peanut butter.

An ambulance showed up more than an hour later and whisked Randolph away, leaving the dog.

A sheriff's deputy showed up minutes later and, after giving a report, Quinones continued his trip. The deputy took the dog.

But Quinones soon noticed what appeared to be Randolph's footsteps in the dust and followed them back for four miles until the foot tracks left the road, he said.

When the deputy passed while leaving the area, Quinones pointed out the tracks then continued on.

Oregon State Police said they used an airplane to spot Randolph's Jeep two days later, on July 20. His second dog had stayed at the site and was also alive.

The dog may have gotten some water from mud puddles in the creek bed, Lake County Deputy Buck Maganzini said.

The Jeep was miles from the nearest paved road, he added. Lake County is nearly 400 miles southeast of Portland.

"It's still there. It very well could stay there forever. I don't know how he got the Jeep in as far as he did," Maganzini said.

Randolph spent several nights in a hospital but is now home and recovering, as are his dogs. A home phone listing for him was disconnected.

"He was just out driving the roads — that's kind of common out here," Maganzini said. "There's not a heck of a lot else to do. You see a lot of pretty country."

Quinones has finished his back-country bike trip and said he feels lucky that he found Randolph when he did — and that he had a way to summon help.

He later discovered it would have been a six-hour ride to the next campsite with cellphone service had he not had his GPS tracking "SOS" device.

"There's no way to tell how long he'd been collapsed on that road," he said. "It's kind of mind-blowing."