Business owners, city agencies, volunteers and cleaning crews swept glass off sidewalks, scrubbed graffiti and tried to pick up the pieces in the riot's aftermath. 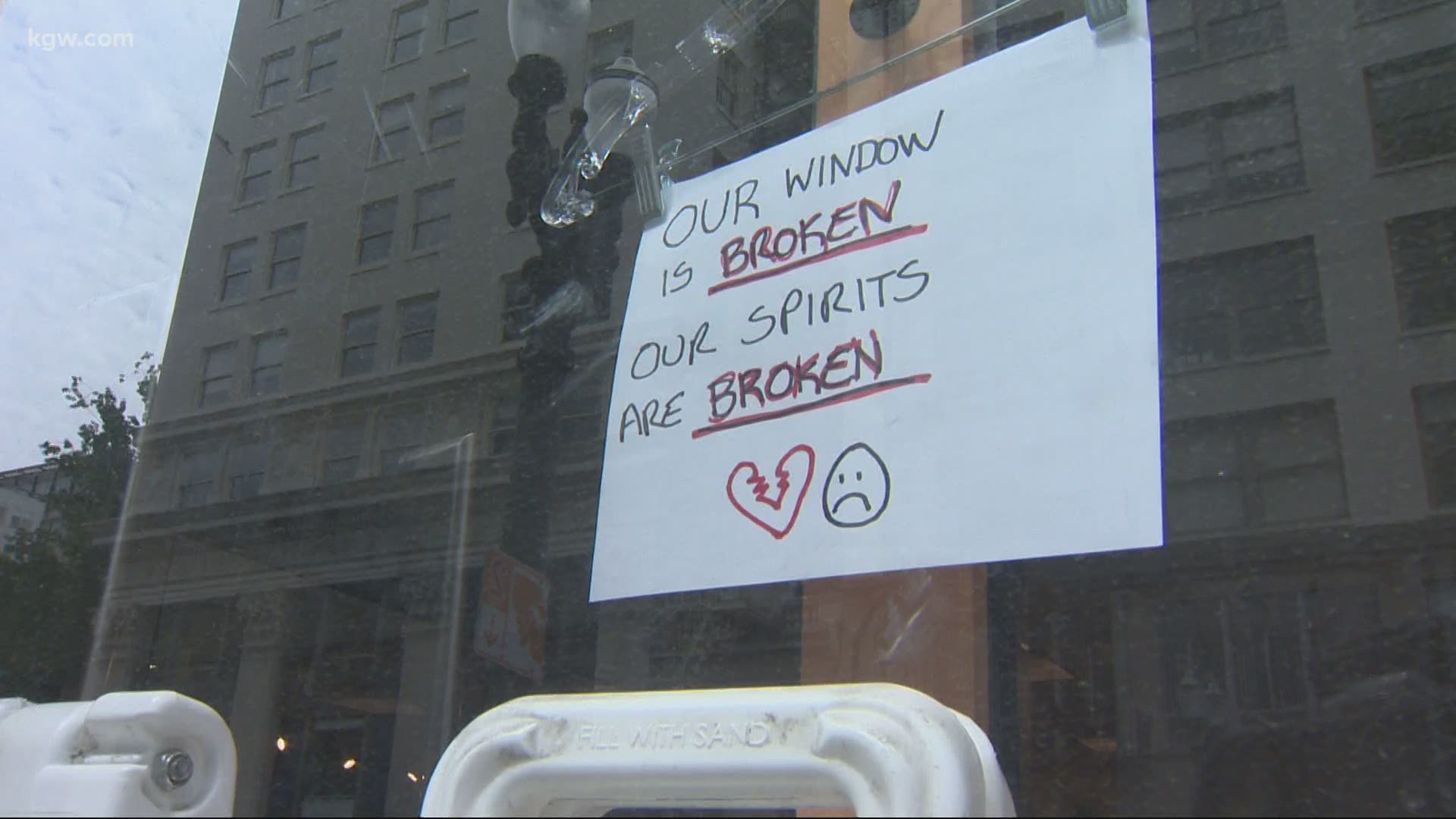 PORTLAND, Ore — In the aftermath of the riots, Portland Mayor Ted Wheeler, faith leaders and law enforcement walked around downtown Portland to see the destruction first hand in the light of day.

Dozens of businesses - big and small - were hit in the riot.

Throughout the day, business owners and employees who've already lost so much during this pandemic mopped up messes.

"I've never seen anything of this magnitude," Mayor Wheeler said, "The damage here is widespread. It’s not localized, it’s all throughout the downtown area."

The sound of drills boarding up shattered windows echoed across Downtown Portland Saturday. Business owners, their staff, property owners, contractors, city agencies, volunteers and cleaning crews were sweeping glass off sidewalks, scrubbing spray painted messages off walls, and trying to pick up the pieces in the aftermath of the riots.

Ammi Brooks is apart of the Artistic Portland cooperative and after watching the riots play out on the news, came down to the store at 8 a.m. Saturday morning to find broken windows and glass shattered everywhere.

"I just hope this isn't all for naught, for what's going on in our country and in Portland," said Brooks. "I hope something changed or transformed and that things will be better. I'm optimistic. But then, it's been going on for a long time."

The dust had barely settled when Mayor Wheeler, law enforcement and faith leaders walked the streets to try to grasp the extent of the damage.

"It's just a sad day for our city," the mayor said when he saw smashed windows at Bangkok Palace.

The smell of smoke from cars and buildings set on fire still lingered in the air Saturday afternoon.

"There's not a question this actually takes away from what was a really heartfelt and meaningful national day for demonstrations yesterday," Wheeler said. "This in no way supports the legacy of Mr. Floyd. I don't see how this is in any way helpful to anybody's cause or values."

In a time when businesses across the board are suffering from the economic fall-out of the coronavirus crisis.

The Portland Business Alliance says what happened hours after the peaceful protests was "simply anarchy" and they condemn those involved with the looting and wanton destruction of Portland.

"The damage also occurred at a point in time where our business community cannot afford this kind of cost," Portland Business Alliance President Andrew Hoan said. "This is just the worst timing, worst behavior and unacceptable by any standards of peaceful demonstrations that we support."

Portland Business Alliance is calling upon city and state leaders to activate the National Guard to support the Portland Police Bureau should looters return to Portland's streets Saturday night.

Brent Collier owns a small men's clothing store downtown. He got a call in the middle of the night from the manager of his store, telling him to turn on the TV and watch the news. He knew it would be dangerous to go down and check out what was going on for himself, so he waited till Saturday morning.

"We pulled up and it's like, 'Oh man, we got hit'," Collier said. "Just out of nowhere, no preparation. Just kind of a bummer on top of bummers."

Collier just reopened his store Collier's after shutting down to curb the spread of COVID-19.

"It's just tough, getting that little bit of pride back that I haven't felt in a while because I've always been proud of my store, I've always tried to make it look good," Collier said. "It's a little thing but it means a lot to you, so just to have that taken away and not feel that again and just getting back to some of that."

He says looters took thousands of dollars worth of whatever they could grab inside the store: masks, expensive luggage, suits, and wallets.

Signs posted in his window express his feelings of violation and heartbreak. They read: "Our window is broken. Our spirits are broken" and, "We are a ma and pa biz. Be kind."

"[I'm] still keeping a good attitude," said Collier. "There's nothing you can do, you know."

In the coming days mom and pop shops and big stores like Target and Louis Vuitton will be tallying up just how much damage was done.