Insurance underwriters are taking riots and damage into account when choosing whether or not to renew some policies. 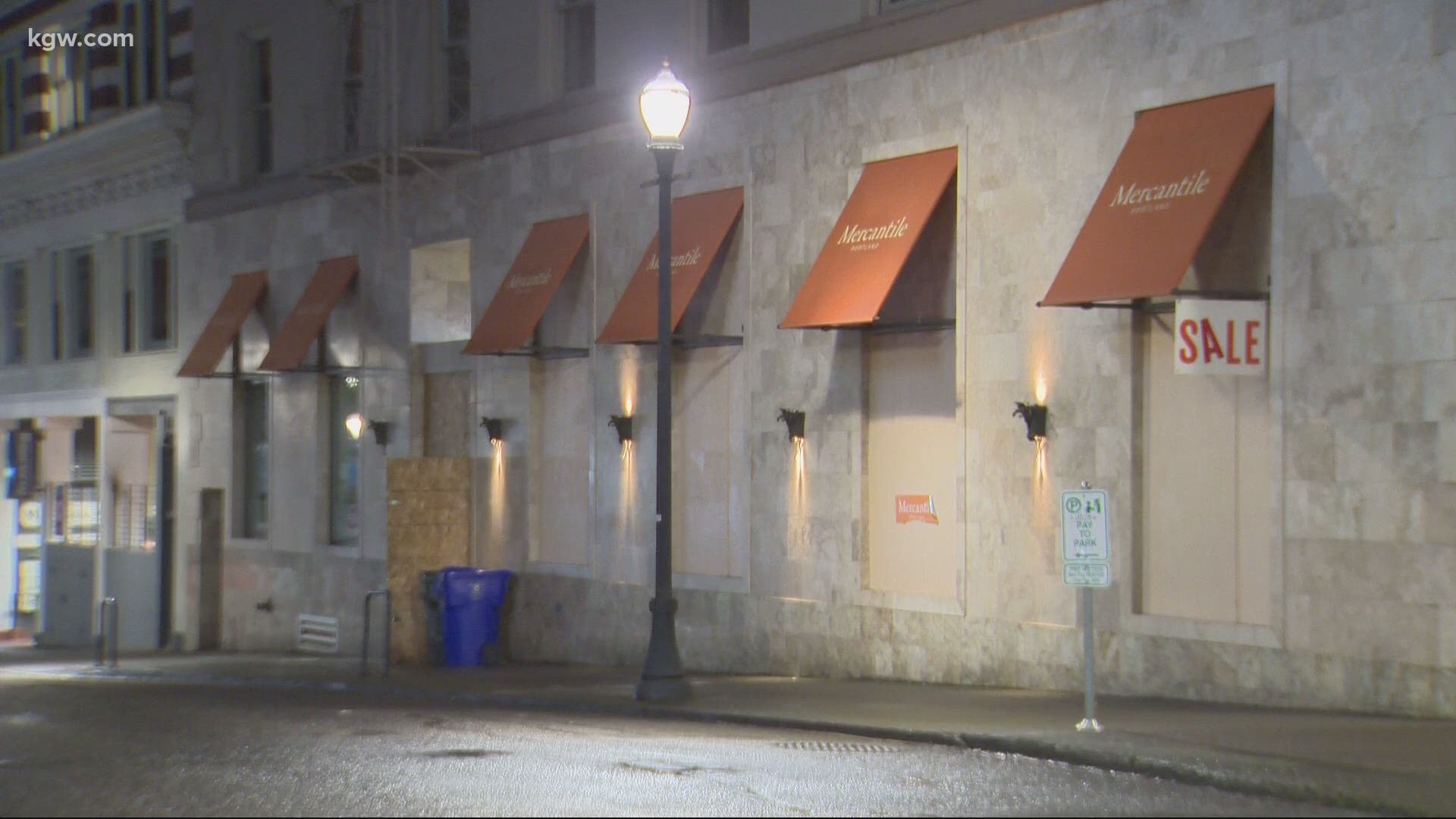 PORTLAND, Ore. — In downtown Portland, plywood and graffiti are the new cityscape. Only, it isn’t new, anymore.

Since late last spring, businesses have been dealing with damage and looting from riots and protests, most recently a New Year’s Eve riot organized by an anti-capitalist group. In May, Mercantile Portland on SW Alder suffered over $1 million dollars in damage and looting during a riot in response to the death of George Floyd.

“Just getting everything cleaned up, accounted for and put back together, we didn't open until September 24,” said Eric Murfitt, General Manager of Mercantile Portland.

Murfitt wanted to move forward and stay positive but then weeks later, the business experienced another blow.

“We got a letter of non-renewal from our insurance company,” he said.

Murfitt said his insurance broker tried over a dozen top-tier carriers, but none of them were willing to insure the store. Finally, an insurance company from the wholesale market wrote them a policy.

“It was a really awful policy,” said Murfitt. “It's four-times the premium we were paying and it doesn't cover things like civil unrest; the kinds of things that happened here will not be covered.”

“We definitely had a front-row seat to a lot of loss this year and that's been hard,” said Schimmel.

Schimmel said the reality in every market is that underwriters must assess risk in part by looking at trends and liability when considering providing coverage.

“Prior to the election, for example, some underwriters were waiting to see the outcome of the election,” said Schimmel. “Some are looking at headlines. Some are very familiar with Portland, others are further away geographically.”

Even outside of what happened in 2020, insurance brokers said they were already facing what they call a “hard market,” created in part by liability losses across the nation, including those caused by the California wildfires. That didn't leave insurance carriers a lot of wiggle room while they considering taking on more risk. As a result, some businesses are having to make tough decisions to compensate for increases in insurance costs.

“I decided not to have my earthquake policy anymore just to be able to keep my rates to a reasonable manageable level,” said Steven Lien, owner of UnderU4Men, on SW Washington. “A catastrophic earthquake hits then I'm kind of messed up."

Lien said his insurance rate went up 15% when he renewed last fall, after claiming just one broken window. Within weeks of renewing, he lost two more windows at nearly $4,000 a pop.

“I kind of got lucky in the timing of the moment but I am concerned,” said Lien. “They can still cancel you.”

For many businesses, insurance deductibles are so high, the cost of fixing broken windows falls on them.

“It's the small businesses bearing the brunt of this burden, it's incredibly sad and very hard to watch,” said Vanessa Sturgeon, CEO of TMT Development. Sturgeon and Melvin Mark Companies CEO, Jim Mark, helped start Rose City Downtown Collective, a group aimed at rebuilding the local economy and the spirit of downtown Portland. They started a GoFundMe to help small businesses replace broken windows as they continue suffering damage.

“It's an attack on all Portlanders and we need this revenue,” said Mark. “Without a sales tax, the state needs healthy businesses.”

Eric Murfitt hopes Mercantile Portland will thrive again, though with his current insurance policy, it feels a little like flying without a net.

“It makes us anxious, we're keeping the boards up... just to protect ourselves," said Murfitt. "Because the city's not doing that for us.”