After her leg was amputated, Willow was gifted a prosthetic leg by the same rescue credited with saving her life. Now, she’s running and playing. 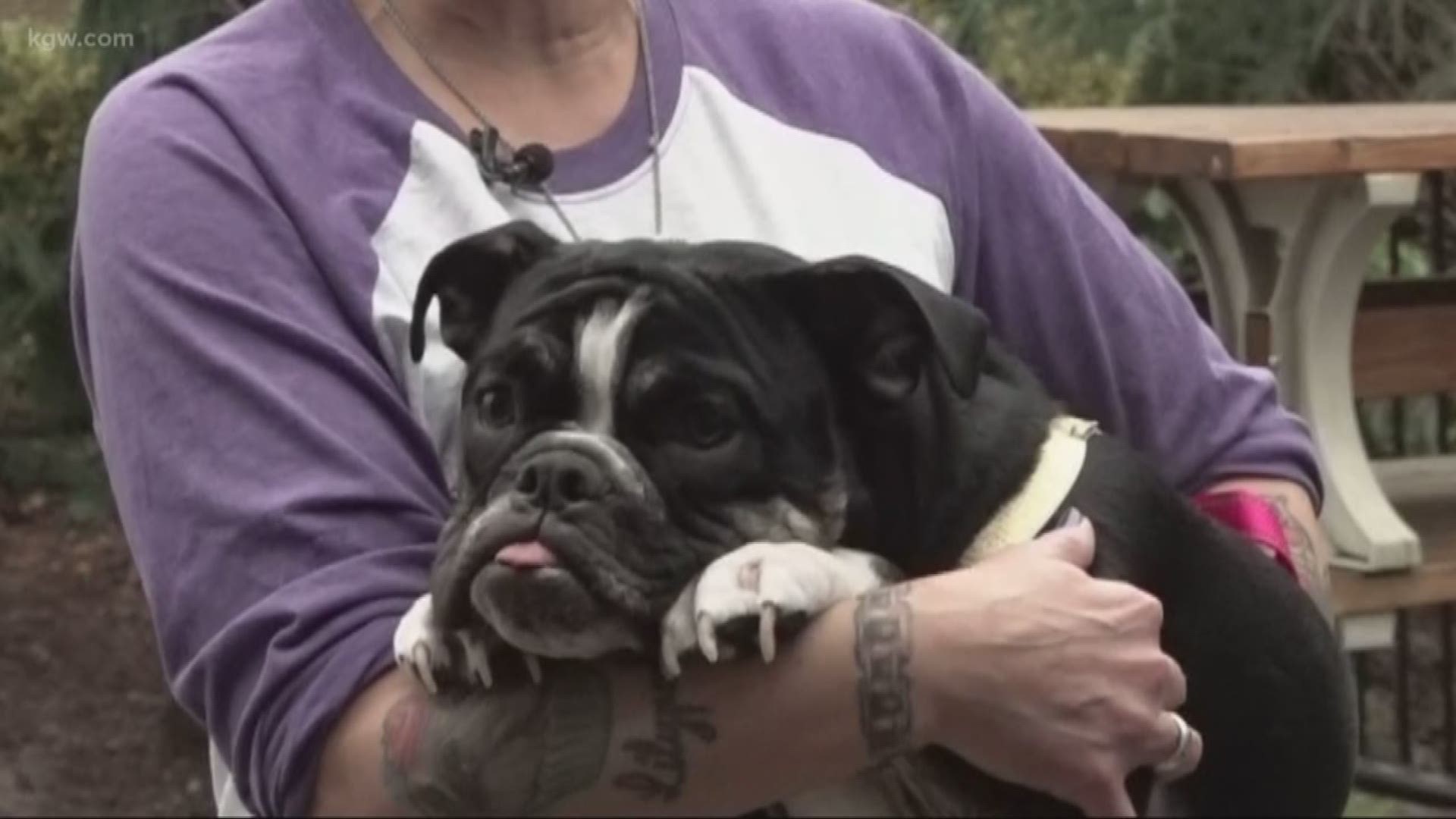 TIGARD, Ore. — Last month, KGW met an incredible English bulldog named Willow and her amazing family the Audovas. The nearly one-year-old pooch had her leg amputated earlier in the year. She and her family were waiting patiently for her new prosthetic, donated by a local bulldog rescue.

The prosthetic arrived right around Christmas and now Willow is running and playing like the puppy she is.

Saturday was a big day for Willow. She made her public debut with her brand-new prosthetic at Fido’s - The World's First Dog Tap House. She joined about a dozen special needs bulldogs at a fundraiser there for the rescue that saved her life: Lily’s Pad Rescue.

“So, this is family. This is what we do. We bring families together, we take these dogs, we bring them into our rescue, we get them to their best possible wellness, and we place them in loving families,” Founder and President of Lily’s Pad Rescue Rachel Davis said.

When Willow was born, she was stuck in the birth canal for 12 hours, causing deformities in her leg. The Audova family tried therapy and then surgery, but her leg was beyond repair and had to be amputated.

“I never, ever imagined that this is where we would be sitting right now with this dog,” Willow’s human Kim Audova said.

We first met Willow and her humans Kim and Andrew Audova around Christmas time when she was waiting for a prosthetic leg with the right fit. Her first prosthetic didn’t work well with her body and needed improvements. Now, she was the perfect prosthetic for her needs.

“It was amazing, because we just knew this time it was going to work, and we knew because of the type of design that her leg was. It needed to be a full prosthetic,” Audova said.

RELATED: English bulldog Willow is getting a bionic leg for Christmas

From her first prosthetic to this brand new one, Lily’s Pad Rescue has been there to foot the bill and support the Audovas.

In fact, Davis has been there for Willow from the start. Saving her from a likely death hours after she was born.

“I rescued her when she was 12 hours old, 12 hours old, and today she’s walking with a prosthetic because we have been able to provide that for her,” David said.

At just under one-year-old, Willow is still a puppy and now she can play like one.

“It’s taken her a little time to figure out how to actually move it and now she’s just taken off,” Audova said.

Fido’s Tap Room was the perfect setting for Willow’s debut and Saturday’s fundraiser. Not only is it a dog-friendly place to grab a pint and tasty food, it is also the home of dogs who need to be adopted.

“Just eat, drink, adopt, which is their motto here at Fido’s,” Davis said.

Davis even brought some of her adoptable special-needs dogs Saturday in need of a home.

A portion of Saturday’s sales went right to Lily’s Pad. It’s events like this that make it possible for Davis and her husband Ken to keep rewriting the stories of animals like Willow.

“These are the throw-a-ways. These are the dogs that wouldn’t have had a chance if we did not say yes,” Davis said. “Because we said yes, and another family said yes; we’ve created family and we get to be part of that family life-long.

MORE: Siberian husky with unique eyes given up by breeder but rescued