Do squatters have rights in Oregon?

A Portland lawyer talked to KGW about "squatters' rights" and how a landlord can eject them from their residence. 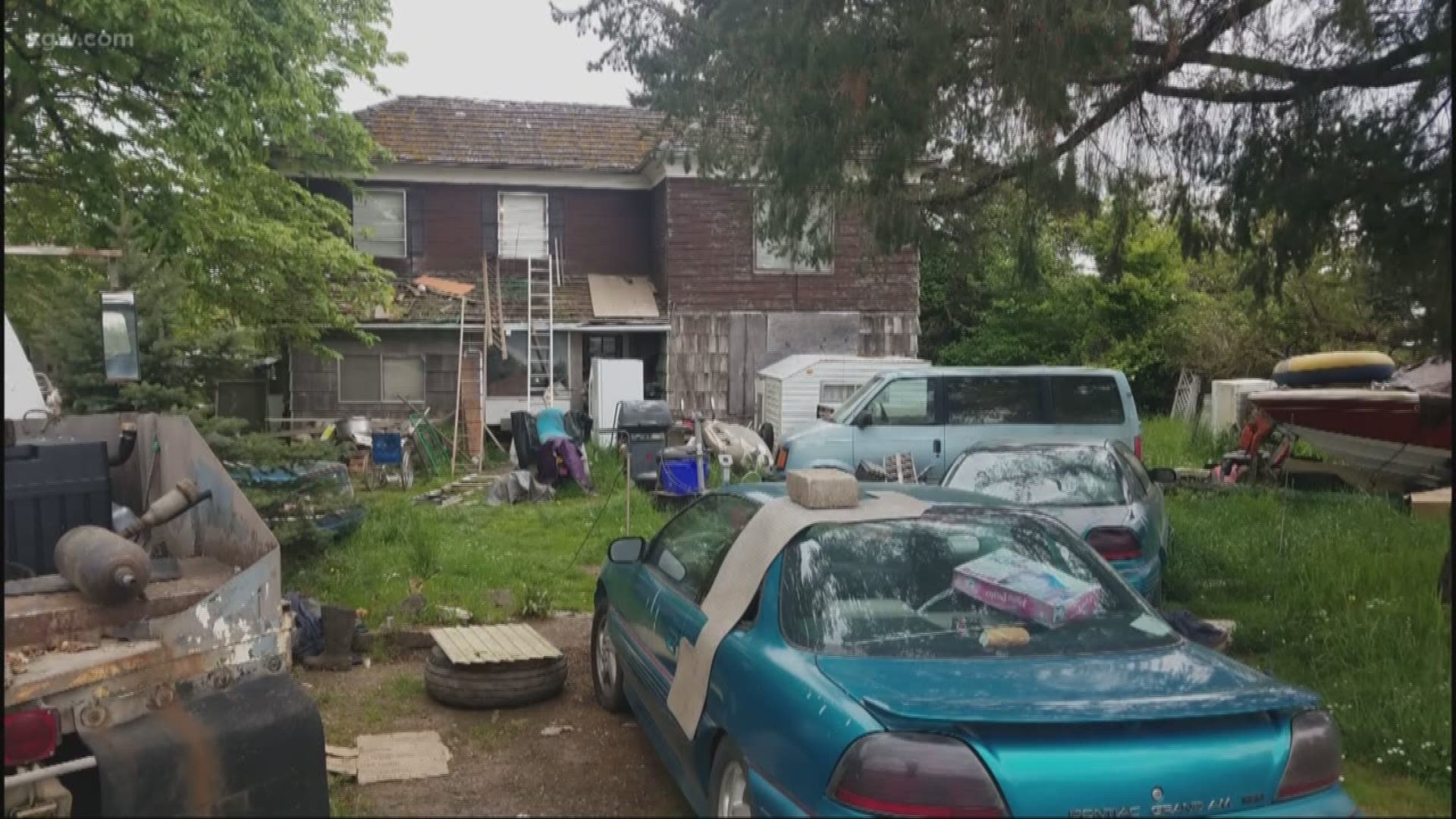 PORTLAND, Ore. — Have you heard the term 'squatter'? It’s somebody living somewhere without permission.

The problem is affecting landlords all over Oregon, in both urban and rural areas.

KGW has covered the situation extensively in recent months and learned through our reporting that it's not easy to get squatters to leave your home or property.

RELATED: How Oregon law protected campers who took over a rural property

Our stories have brought a strong reaction on social media from our audience; many people are asking questions about how this can happen. KGW’s Morgan Romero took your questions to an attorney who’s considered the expert in town on landlord-tenant law.

Is there a gap in our legal system?

Troy Pickard, managing attorney at Portland Defender, says while squatters aren't legitimate tenants, you do have to go through a civil court process to kick them out. Depending on the route you take, it can take weeks or months.

Pickard feels the lengthy timeline highlights a gap in the system of laws we have but those laws are designed to avoid violent confrontations:

“Situations, where somebody is coming into your home, are exactly the kind of situations where violence is likely to unfold," said Pickard. "We want to have a process for straightening out who is supposed to be there and having a process for the transfer of possession to happen in a nonviolent way.”

Landlords and neighbors we spoke to for these stories have called police multiple times for help with squatters in vacant properties and homes.

But if law enforcement can't prove criminal trespass, they can't do much.

Trespass can be difficult to prove in these cases without some form of evidence, though Pickard acknowledges squatters are trespassing.

“It is a trespass if somebody is wrongfully on the property of another. If you just decide to break into a house one day and start living there, that is a trespass. I mean, undoubtedly it is. And it definitely seems like there are people in Oregon that are doing that that are not being criminally prosecuted. But I guess the alternative is law enforcement making an ad hoc decision based on a very abbreviated process.”

Should a squatter argue they have a right to be there, Pickard says police don’t have to take them at their word, but they choose to in order to avoid risk.

We asked Pickard if that means squatters are protected under a grey area of the Oregon residential landlord-tenant act:

“I don’t think squatters are falling under the residential landlord-tenant act at all. But I think that law enforcement is reluctant to involve themselves in those kinds of disputes without the court having told them to first. Because I don’t think that our police officers and sheriff’s deputies want to be put into the position of having to make that kind of decision when there already is a process in place for the judicial system to make that kind of decision.”

Law enforcement could risk kicking out a legitimate tenant and stripping away due process.

What are the processes to kick squatters out?

There are two legal processes often used: ejectment and eviction.

KGW covered a case where a woman died and squatters took over her vacant home and refused to leave. The attorney representing her estate tried to formally evict the squatters, filing a complaint and using a forcible entry and detainer (FED), and it eventually worked.

But Pickard says the right legal move is typically ejectment. That's essentially a lawsuit where someone is suing for a court judgment awarding their own property back and stating the other person there must leave.

RELATED: 'They had the locks changed': Squatters stake a claim in vacant North Portland house

Ironically, Pickard says ejectment is a long docket civil process as opposed to a short docket, like evictions. Ejectment cases drag on months longer than eviction, but he says it's the way to go since squatters aren't real tenants.

In eviction cases, one must prove someone forced their way into a home, or where a previous tenant or owner is unlawfully holding the home.

“The way courts have interpreted that law is that if you’re going to use the 'unlawfully holding the home idea' there has to have been a landlord-tenant relationship,” Pickard said. “If it’s just a squatter there was never a landlord-tenant relationship. So the only way you can remove squatter through the eviction process is if you can prove they forcibly entered the home. So if you can prove that they came in and smashed a window and came in, maybe you can prove forcible entry. But if it’s a situation where maybe a back door was left unlocked you might not have that ability at all.”

Pickard says if you were to try to evict a true squatter using a FED, you’re running a couple of risks:

The first of which, according to Pickard is that the squatter will be awarded a win in the case because the wrong process of being rid of them has been used. Additionally, there is a risk that the court will make the owner pay for the squatters' legal bills.

So is it necessary to keep any litigious squatter issues in civil courts and not criminal?

“I don't think I would take squatters out of the civil process. That's not to say they can't be prosecuted for something like trespassing. But I don't know if the answer to all of our problems is to hyper criminalize everything.”

What rights do squatters have?

We've been seeing a lot of comments on social media from viewers asking if squatters have rights in Oregon.

Pickard says there's so much misinformation surrounding that phrase. He says in Oregon there's no such thing.

“There is no rule that says an owner can’t just wait until the people are gone to go to the house and change the locks. So, in that sense, it’s fundamentally different than a landlord-tenant situation.

“If anything, there are a whole suite of tenants’ rights that squatters don’t have. And why should they?” Pickard said.

Though it can appear that squatters are awarded rights due to the lengthy legal process that can sometimes end in the squatters' favor and prolongs the time that someone is allowed to unlawfully live in a residence.

“That's true yes, the law does not operate as quickly as we would like it to. And I think that's true for endless circumstances. It allows things to happen in a less emotionally-charged way.”

While Pickard doesn't think we should take this out of civil court and into criminal, Pickard talked about solutions for expediting things.

One of Pickard's suggestions falls into the lap of the Oregon State legislature. This proposed solution asks the legislature to tweak eviction law to clearly allow a homeowner or landlord to use the eviction process to get rid of a squatter.

“It doesn’t seem reasonable to have a legal system wherein a squatter can hold out in a home wrongfully longer than a legitimate tenant can hold out in a home,” Pickard said. “It definitely seems like the process of legally removing a squatter should be at least as easy as the process of removing a tenant who no longer has the right to stay at the home.”

Pickard says the other way to fix it could be for law enforcement to approach or handle squatters differently:

“Which I think is going to bring with it a lot of concerns about somebody being wrongfully removed from a home. I think it’s one of those things where you’d rather have 100 guilty men go free than one innocent man be put in jail. And I think by the same token, you’d rather have 100 squatters remain in a home wrongfully rather than one legit tenant be forced out overnight by a police officer that makes a bad judgment.”

What do you do if you have squatters in your home or property?

Pickard says first, speak with an attorney if you can do so.

Second, try to make contact and speak with the people inside to find out all the facts.

Pickard says since it’s unlikely police will do anything, you’ll have to make a judgment call:

“Is this something where we’re going to go through a court process to get these people out? Is this something where maybe I would spend less money by just giving people some money to just give me the keys and get out of the house? Or is it a situation where I’m just going to wait until these people leave for the day and I’m just going to come into the house and change the locks on my own?”

However, if people are willing to break into a home to live there, they will often find a way around changed locks – such as smashing windows and breaking down doors.

“In that case maybe it makes sense to have some kind of home security system installed on it or something like that, so you would potentially have some kind of evidence you can give to the police. Because if you can give the police, for example, a videotape showing somebody breaking a window, I think that puts police in a different situation. As opposed to police coming and being confronted with somebody who simply says, ‘I live here’.”

It is important to know your rights as a landlord and a tenant in order to properly handle any landlord-tenant issue as well as squatters.