Protesters marched from Laurelhurst Park to the Penumbra building where they were joined via video chat by Breonna Taylor's aunt. 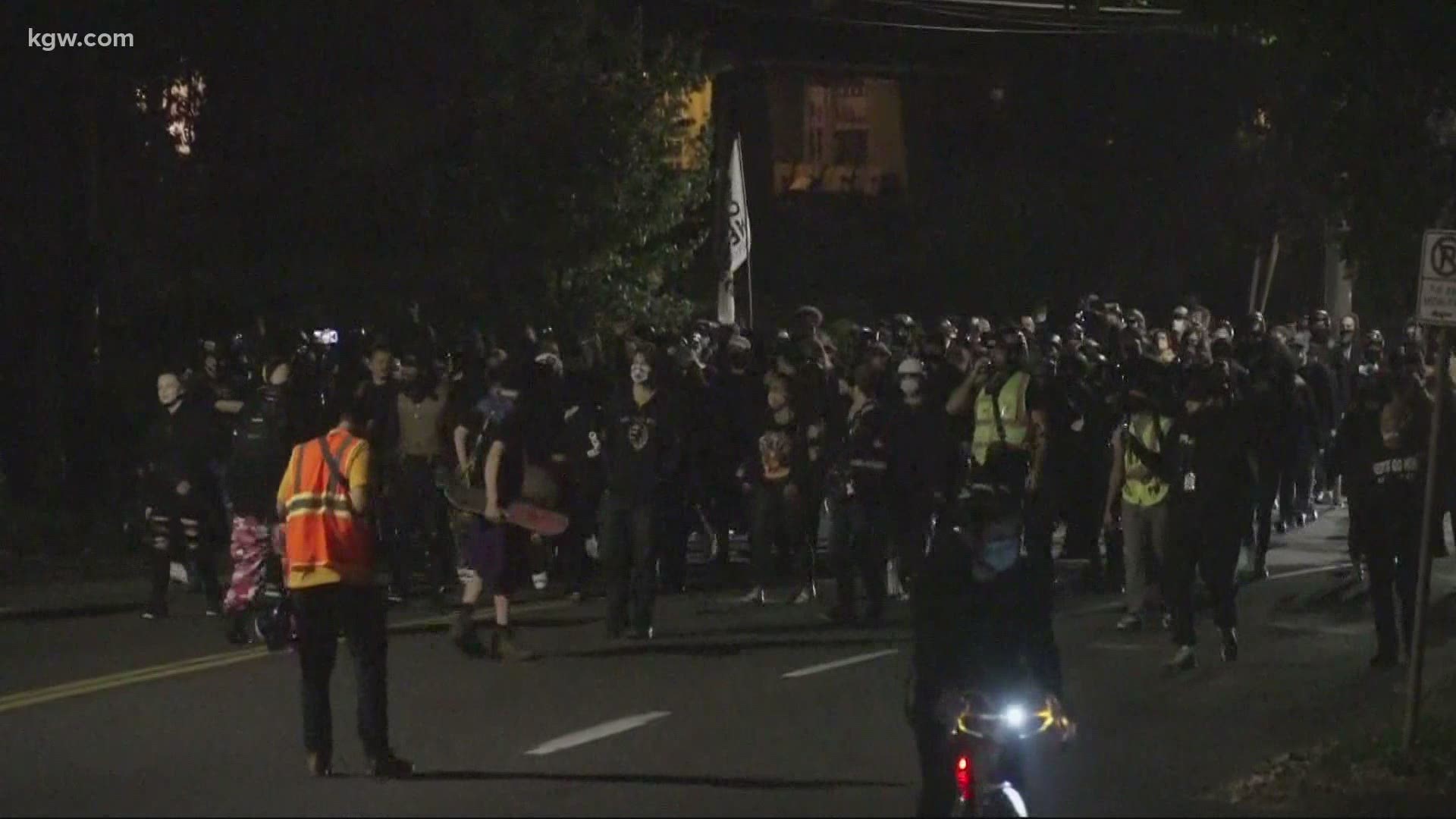 PORTLAND, Ore. — Protests continue in Portland for what will be nearly 120 nights.

On Friday night, protesters gathered at Laurelhurst Park for a direct action march. Like the ones before it, it is calling for the complete abolition of police and prisons. They marched to the Penumbra Kelly building.

An open mic blues performance in front of the MCSO building. It has been largely peaceful tonight, with little intervention from Portland Police. #PortlandProtest #PDXProtest #BlackLivesMatter pic.twitter.com/cjNmTG6MZv

Protesters began chanting "Bow for Breonna." According to reporter Garrison Davis, organizers of the event were able to get Breonna's aunt on the phone.

At around 10:20 p.m. after protesters had walked around the block, protesters returned. Pepper balls were fired at some people near Burnside and 47th.

Pepper bullets shot at people on the lawn near Burnside and 47th. It was officer 12 aka Brent Taylor.
(bad pic sorry, at least should give an idea of where it happened) #BlackLivesMatter  #BLM #PortlandProtest #Portland pic.twitter.com/ugP89HhAaR

At around 10 p.m. Portland police told protesters to stop throwing things, like eggs and if they did not, a tweet suggested that Portland police would take the snack van into custody as "evidence."

Failure to adhere to this order may subject you to arrest, citation and/or force. Officers may seize the Snack Wagon as evidence.

There are reports from independent journalists with the protesters that there were around a dozen patrol vehicles waiting at the Penumbra building. The offers turned on the lights on their cars and protesters responded by using reflecting shields to reflect the bright lights back at them.

Calls for “reflector shields” to the front of the crowd of protesters to reflect the light back at the officers. #BlackLivesMatter #BLM #PortlandProtest #Portland pic.twitter.com/cGPv40EyKu

Police also warn press and legal observers not to go onto the Penumbra Kelly Building property via the LRAD system and tweets.

First police announcements of the night directed at press and legal observers, this is second version of this announcement given. It is more friendly than the first iteration. #BlackLivesMatter #BLM #PortlandProtest #Portland pic.twitter.com/zttx8Nq02H

Police warned in a series of tweets that the Penumbra Kelly Building is closed to the public and issued another reminder for protesters to stay off the street while marching. A permit is needed to block a roadway and the protesters did not have one for Friday night.

Protesters began marching around 9 p.m. as planned and started toward the Penumbra Kelly Building in Portland.

Early on, as protesters were gathering Portland police tweeted that the protesters did not have a permit to march in the streets and would need to stay on sidewalks if they did begin to march.

A mass gathering has come together in Laurelhurst Park. To those gathered there, you do not have a permit to march in the streets, any movements need to be done on the sidewalks while following traffic control devices. If you march in the street, (continued)

Protests in Portland over racial injustice and police brutality resumed earlier this month after a brief hiatus due to wildfires across the state blanketing the city in smoky and unhealthy air conditions. Prior to that, there had been more than 100 consecutive nights of demonstrations, many of which ended with clashes between police and protesters, following the police killing of George Floyd, a Black man, in Minneapolis.

Demonstrations have been everything from vigils to those killed by police, to rallies with speakers and music, but the message remains the same: Black Lives Matter.