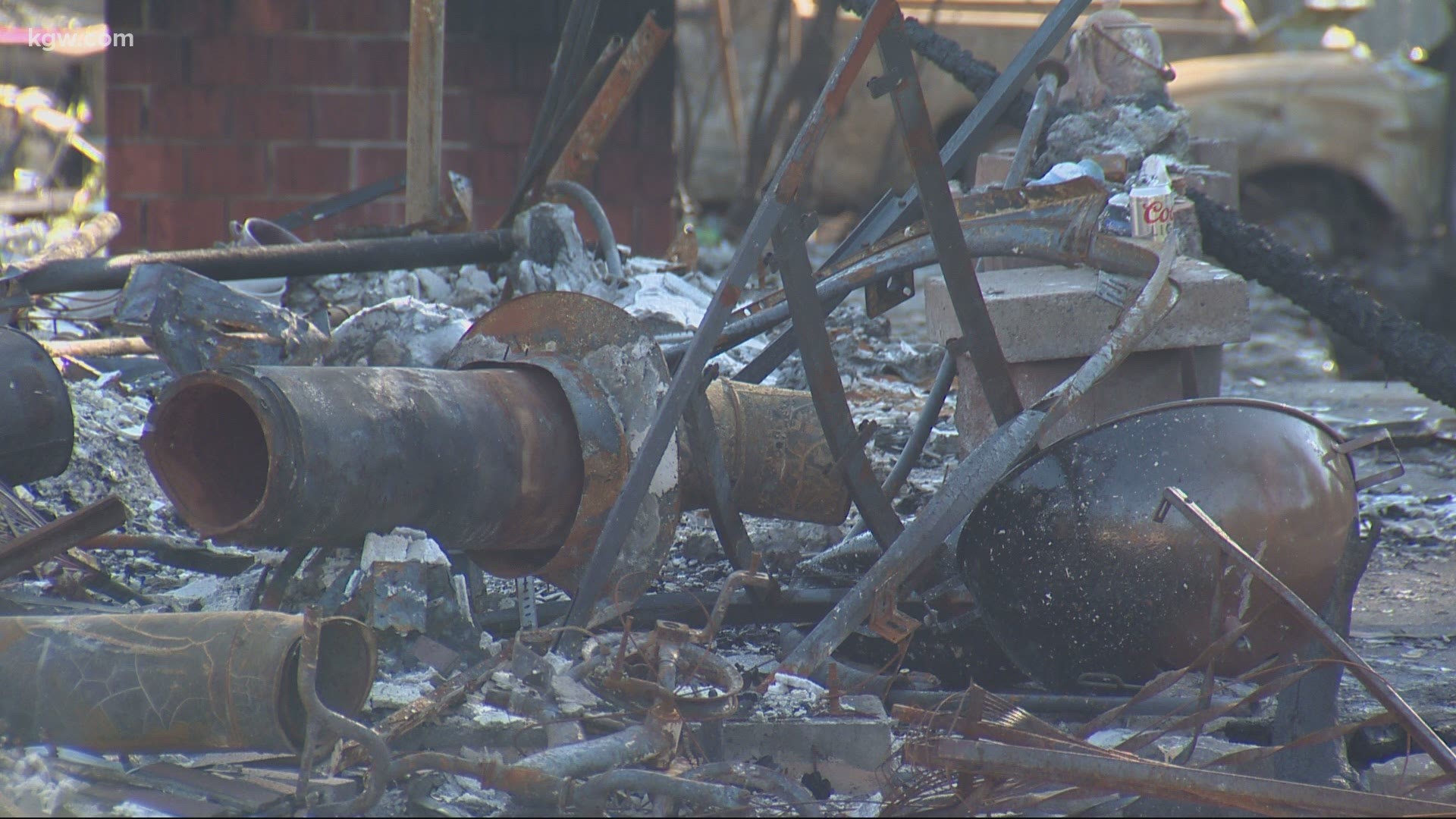 DETROIT, Ore. — It’s been about a month and half since devastating wildfires swept through Detroit and the Santiam Canyon area.

Detroit city officials say hundreds of homes were burned and as cleanup continues, there are many challenges residents and city leaders face.

But despite the destruction, it’s amazing to encounter so much positivity from people who live and work in Detroit.

One of those people is Dean O’Donnell.

“I’ve been a resident here for 20 year. I own Mountain High Grocery,” said O’Donnell, who is also the president of the business association in town.

His business, he said, is one of about two or three left in town out of maybe 15.

“We’re looking at a year and a half, two years, before we’re going to see a business on Main Street,” O’Donnell said.

Across from his store stood Cedars Restaurant and Lounge. It used to be a fixture right off Highway 22, but it’s now gone.

Head further down the main street in town and you’ll see burned buildings and cars lining the road. Homes are gone too. What remains are piles of charred rubble, chimney stacks and glimpses of the lives lived there.

Both O’Donnell and his son lost their homes. His son lost a coffee shop too. While Mountain High Grocery is still standing, it’s closed. There’s still a lot of work to be done before it can open back up.

“Recovery for us is going to be six months at best, just for the store, and we’re still standing,” said O’Donnell.

“We have to clean the entire store out. That means every bit of product in the store is discarded,” he said.

In the weeks and months ahead, O’Donnell will have a lot of cleaning, repairing, and repainting to do.

“It’s not going to be an overnight fix,” he said.

Detroit City Councilor, Eric Page, said hundreds of homes in Detroit burned and the city, as well as its residents, are facing many hurdles.

“We’ve got on-and-off power in play. That took some time for us to even have power up here,” he said.

Add to that, Page said the city still doesn’t have running water.

Right now he said Marion County is providing drinkable water. Managing all this has been a struggle for city leaders, especially with City Hall gone, along with city records.

A big issue O’Donnell mentioned is one that concerns switching from septic to sewer. O’Donnell said he believes it to be the number one issue for Detroit as it recovers.

“There’s a big movement right now to bring sewer to […] not only Detroit but every city that was affected by the wildfires,” said O’Donnell who also mentioned that most septic systems in town were 50-70 years old and nearing the end of their operational lives.

But even in the middle of so much devastation, there’s positive energy in the area.

“Nobody died in the Detroit area, so that’s amazing,” said Chris Tardiff. He’s the president of the Detroit Lake Foundation. He lost a home too.

“When I first walked through here, I got lost. I didn’t know where I was. It was kind of weird. It shook me for a second,” said Tardiff.

Now, Tardiff is focusing his energy on the rebuild.

“We have so many donations coming in. We’re going to put that towards building the community back up,” Tardiff said.

“This is a pull together kind of town,” said Page. He said the goal moving forward is to make Detroit even better than it was before.

“We’re working with Main Street Association to come up with a theme for the town, re-light the town into, we’re thinking a timber town because this was an old timber town,” he said.

“We have to concentrate on the silver linings that are there. Yes, the town is decimated, but the vision for the new town of Detroit is incredible.”

There are big plans for the city of Detroit, but no question, it’ll take some time.

O’Donnell said, while he is well insured, many of the people he knows are underinsured or not insured at all.

City leaders say some building has already started but the overall the process may take two to five years.