A Tigard dad has a message for you: don't block sidewalks with your garbage bins. 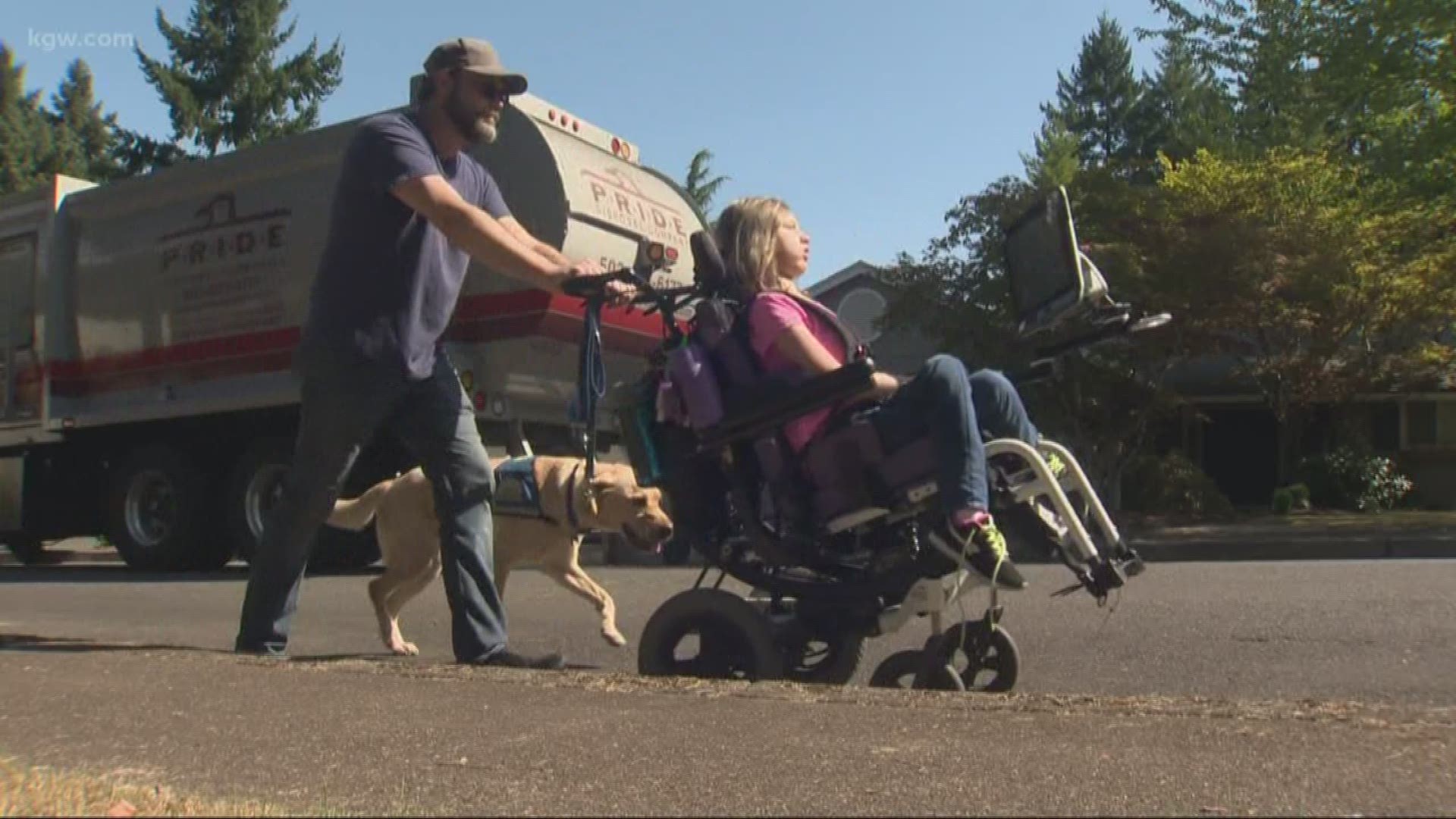 TIGARD, Oregon — A Tigard dad has a message for you: don't block sidewalks with your garbage bins.

Mick Stevens’ daughter needs a manual wheelchair to get around because she has cerebral palsy. They’re working toward powered mobility.

But with obstacles scattered in the way, they can't safely get where they need to go in their neighborhood.

It falls on the community, Mick says, but also on garbage collectors and the city.

Almost every day he tries to get Jillian outside and to a neighborhood park.

"She absolutely loves it. She would prefer to be outside rather than inside."

But doing that is a struggle; many neighborhood sidewalks are off-limits because of overgrown bushes, basketball hoops, cars and, most frequently, people’s garbage bins.

"It’s been going on for as long as we've been here,” Mick said. “It is dangerous.”

Mick always knows on trash day he'll be forced to wheel Jillian in the street, which is dangerous. Riding on the uneven streets poses hazards and often messes with the medical equipment on her chair, he says. Mick has to keep his eyes and ears peeled for cars as they ride in the road. Oftentimes, he says Jillian’s feeding tube alarm goes off and needs to be tended to but they aren’t in a safe place to stop.

"This impacts people's independence. It impacts their health. Being able to get out and go for a walk is something that is enjoyable and there are health benefits to it. And you just think everyone, regardless of their abilities, should be able to take advantage of being able to navigate the city in a safe way,” Mick said.

So Mick reached out to Pride Disposal, the garbage collection service, and explained obstructing sidewalks is a violation of city code. The company responded and told him they drop bins back where people put them because it’s the best customer service.

"I definitely think this resident's concerns are valid. In hindsight, I wish we would have addressed it a little bit differently in the beginning,” Pride Disposal president Kristin Leichner told KGW.

Leichner says they've been trying to make changes. A newsletter recently went out with a small blurb reminding customers not to block sidewalks. Depending on how people are enrolled, they either received it physically in the mail or were sent a link via email.

Leichner says they also informed their truck drivers in their regular weekly meeting not to obstruct sidewalks or bike lanes.

"We did that in a drivers' meeting within a week of email sent out. But it seems like perhaps we needed to talk a little more clearly about this particular neighborhood where there was an issue,” Leichner said.

After recently reviewing video from their trucks, Leichner realized the message didn't get through to every customer or every truck driver.

"I definitely think we're going to talk to all of our drivers again and make sure each driver individually is aware of this,” she added.

Mick feels some of the onus falls on the City of Tigard.

"Communication has got to be the key because there's no enforcement of it,” he said.

"We do have a code enforcement person in another department. It's one person so we don't have the ability to be out there patrolling and looking for these things. So on a complaint basis, the city can follow up on those things,” Rager said.

But lo and behold, while our KGW crew was interviewing Mick at home Thursday they saw truck drivers picking up bins off the sidewalk and setting that down along the curb the street - for the first time ever.

"As soon as they saw the camera they started putting the bins in the street,” Mick said. "It makes me feel relieved that they're possibly taking this seriously and wanting to do what's right for the safety of all the people in the city."

If it's still an issue in the area, Leichner tells KGW they'll send letters to specific customers telling them to put their bins somewhere that doesn't block sidewalks.