Police detained a large group of people, including journalists, near Northwest 14th Avenue and Marshall Street during Friday night's march through the streets. 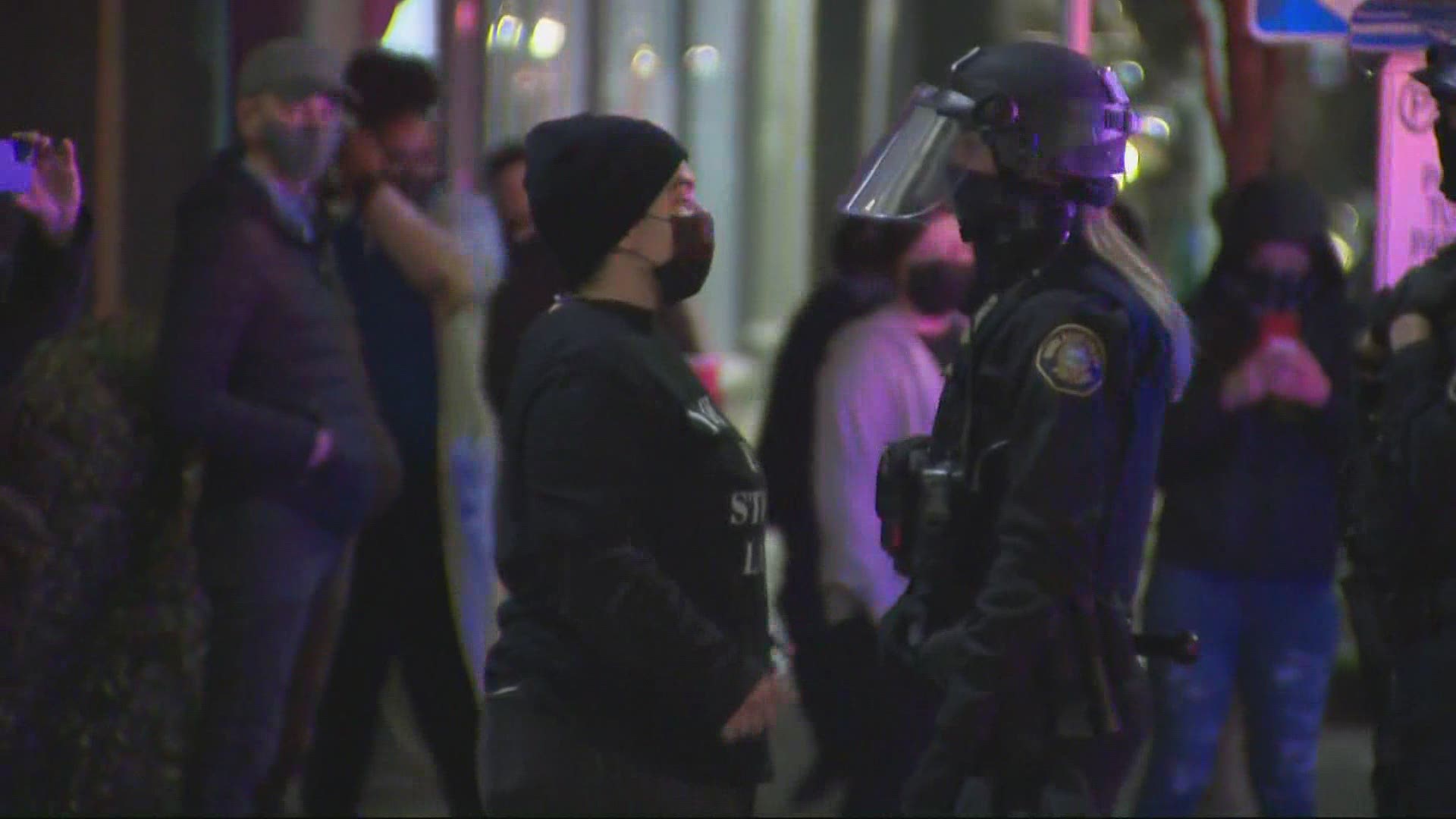 PORTLAND, Ore. — The second night of protests in Portland began at Jamison Square and ended in the Pearl District where police detained a group and made several arrests.

Portland Police Bureau (PPB) confirmed in a release early Saturday morning, officers did use OC pepper spray and one impact munition on the crowd.

A flyer posted on Twitter, asked for people to meet at 8:30 p.m. Friday for an "autonomous demonstration" against Department of Homeland Security (DHS) officers in Portland as well as calling for police accountability regarding violence against Black Indigenous People of Color (BIPOC).

The group started on Northwest 11th Avenue and Johnson Street. Sometime after 9 p.m. crowds began marching in the streets.

According to reporters walking with the protest, multiple people in the crowd were detained near Northwest 13th Avenue and Northwest Marshall Street.

PPB said some in the crowd started breaking windows at 9:15 p.m. and officers made a perimeter around a group between Northwest 13th Avenue and Northwest 14th Avenue.

Portland Police Chief Chuck Lovell issued a statement prior to Friday night's demonstration saying he was aware of it, and that additional patrols would be in the area.

At 9:14 p.m., the Portland police tweeted that a crowd had begun to move and was blocking traffic. Minutes later, police set up a perimeter around a large group in an effort to contain people.

They just detained literally all of us pic.twitter.com/Piw15wZXoN

An independent journalist following demonstrators said everyone on Northwest Marshall Street between 13th and 14th avenues was told to sit down and stay put so they could be investigated for criminal activity. Police said people within the area who did not comply with commands would be subject to tear gas and crowd control weapons.

"This is a temporary detention," police tweeted at 9:52 p.m. "We will be removing you one at a time. Please remain calm and wait for directions."

Police told legal observers and journalists with credentials to come to the corner of Northwest 14th and Marshall Street to be released.

I left the kettle because a protester started yelling at me.
Police demanded my name and birthdate, wrote it on a piece of duct tape and gave it to me to put on my chest. Then they photographed me without my mask on. Here’s a photo of the officer taking my photo. pic.twitter.com/zTM8QOb6Ae

PPB also said in the Saturday morning release It's standard protocol during a criminal investigation to identify and photograph anyone detained.

At 11:24 p.m. some reporters on the ground and demonstrators were still waiting to be released. Some demonstrators sitting didn't comply with these police orders and began linking arms as a form of peaceful resistance.

Suzette Smith, formerly with the Portland Mercury, tweeted a video from inside the detainee's circle.

Protesters are sitting in the street, linking arms and legs, trying to peacefully resist arrest. pic.twitter.com/XEo8kr3Wb1

At 11:58 p.m., a credentialed member of the press Maranie Staab recorded a video showing police forcibly detain her. She can be heard yelling in the video identifying herself as media and not wanting to leave.

I was just forcibly removed from the scene by several @PortlandPolice ofcrs.

I am a credentialed member of the press & made clear I wantd to stay & report.

I was dragged out, labeled w/tape & photographed.

This was a deliberate action to prevent accountability. #portland pic.twitter.com/zfF32oW0vY

Just before 12:30 a.m., freelance journalist, Justin Yau, posted a video on Twitter and said 20-30 people were still being held.

More protesters have gathered at the perimeter around where Portland Police has detained a crowd from the protest earlier. Those released from within say about 20-30 remain inside. #PortlandProtests pic.twitter.com/oHNEy1HSVR

At 12:54 a.m., James Croxton, an alt-weekly correspondent in Portland, shared an emotional photo and accompanying tweet of a young Black man lying on the ground.

This man is sobbing and seriously traumatized by what's unfolded this evening.

Around 1:30 a.m. a confrontation between law enforcement with people in the streets dwindled down as crowds dispersed and officers made arrests.

There were several items found left behind by people who were detained, PPB said. Hammers, a crowbar, bear spray, a sock with rocks in it called a slugging weapon, slingshot and knives collected were photographed by police.

While bystanders were observing the police kettle, PPB said a group approached the outside line of police "physically challenged officers" while people were still detained.

Police said rocks were thrown at them along with full beer cans, it was at this point police said officers used pepper spray and an impact munition to control the crowd.

PPB said, in total, 13 people were charged with crimes.

Most were given a criminal citation in lieu of being arrested. The full list of arrests and charges can be found in Saturday's news release from Portland police.

Friday's demonstration comes on the heels of Thursday night's protest where a crowd gathered at the federal courthouse at Southwest Third Avenue and Main Street.

Police used tear gas and munitions to control the crowd during that protest as well.

The main focus of tension over the last several months has been between demonstrators and DHS officers being stationed at the Federal Courthouse in downtown Portland.  As well as the community calling for police accountability regarding violence against Black Indigenous People of Color (BIPOC).

Crowds gathered shortly after a fence surrounding the courthouse was taken down for the first time since last summer.

This culminated in a clash between groups of people with DHS officers Thursday evening -- ending almost two hours later --  in graffiti, damage to the courthouse and one arrest.

Portland police arrested Darby Howard, 22, on the steps of the federal courthouse for causing destruction during a separate demonstration in protest of a proposed pipeline project.

This is a developing story. Check back for updates.