The crowd gathered shortly after a fence surrounding the courthouse on Southwest Third and Main Street was taken down for the first time since last summer. 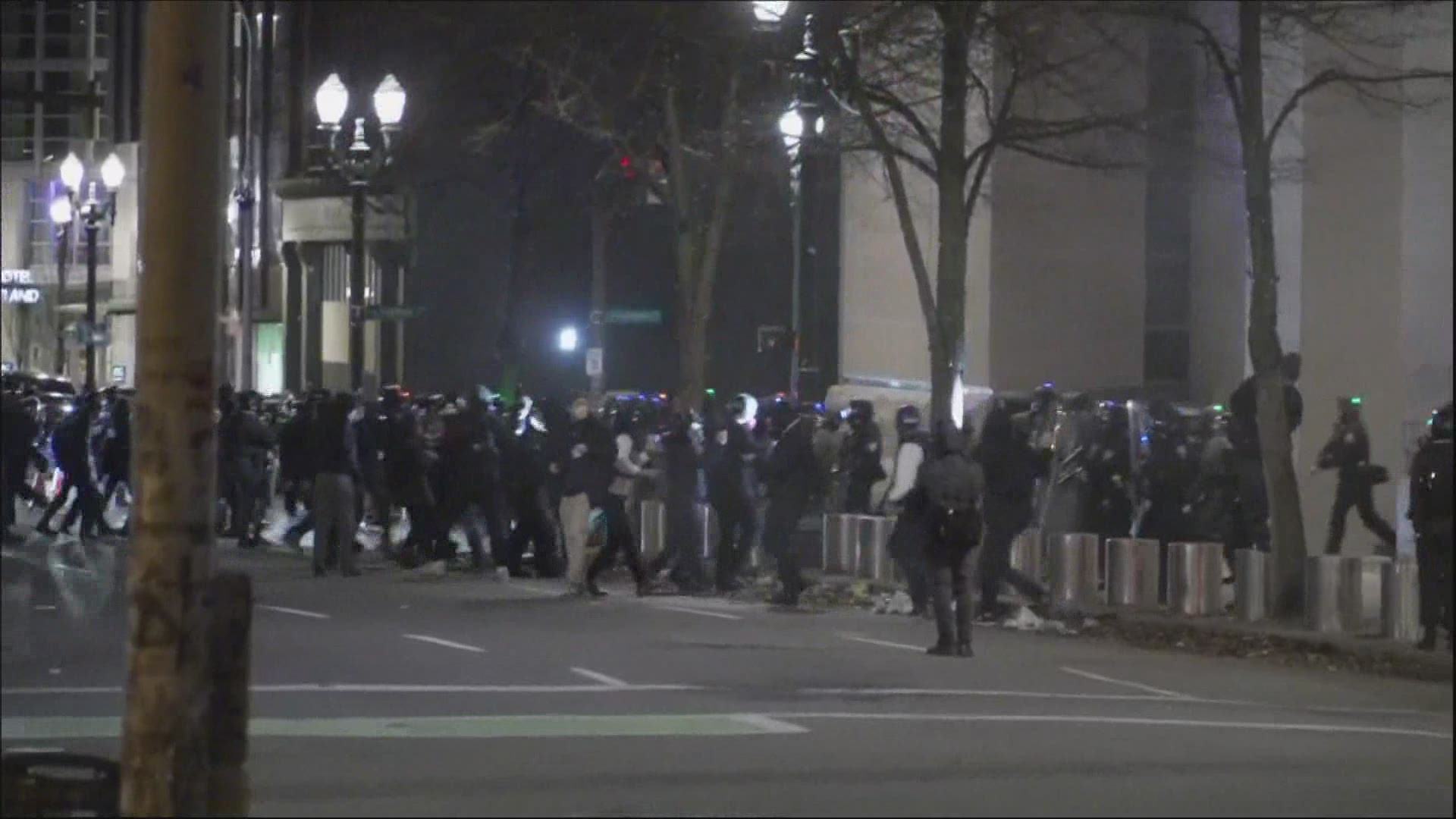 PORTLAND, Ore. — A crowd gathered outside the federal courthouse in downtown Portland Thursday night for a protest against police violence.

The demonstration began around 8:30 p.m. outside the courthouse on Southwest Third Avenue and Main Street, shortly after the fence surrounding the courthouse was taken down for the first time since last summer.

The courthouse doors were being boarded up when tensions between people and federal officers there erupted. This started a chain reaction of civil unrest and destruction, leading authorities to deploy tear gas.

At least one person was arrested.

The feds march even further into the streets of downtown Portland while firing off chemical weapons and projectiles. A few of their pepperball and 40 mm launchers appear to be malfunctioning. pic.twitter.com/AwyQ9UQPVa

The courthouse has been the scene of several protests, unlawful assemblies and riots since last May following the death of George Floyd in Minneapolis.

In Portland and around the U.S., people wonder, why are the protests still happening here? According to another independent journalist at the protest, those who support the Black Lives Matter (BLM) movement cited Portland police and Mayor Ted Wheeler's refusal to reopen a case where a Black man was shot multiple times by police.

PPB and Ted wheeler refuse to reopen Patrick Kimmons case. A black man that was shot multiple times by Portland police in the back.

A grand jury did find police justified in the killing of Patrick Kimmons. The officers who fired the shots testified that Kimmons shot two people during a fight, then pointed the gun at officers before they shot him nine times.

Earlier on Thursday, Portland police arrested Darby Howard, 22, on the steps of the federal courthouse for causing destruction during a separate demonstration in protest of a proposed pipeline project.

Police said a group of people invaded the lobby of an office building in the 1300 block of Southwest Fifth Avenue.

"Officers arrived and found about 30 people refusing to leave, some smoking inside, some with pets," police said in a news release. "The situation escalated when people began damaging property, including a television and the front doors to the building."

When officers found Howard outside the courthouse, he allegedly resisted arrest and "an officer was punched in the face," police said.

This is a developing story. We will continue to update it as we learn more.