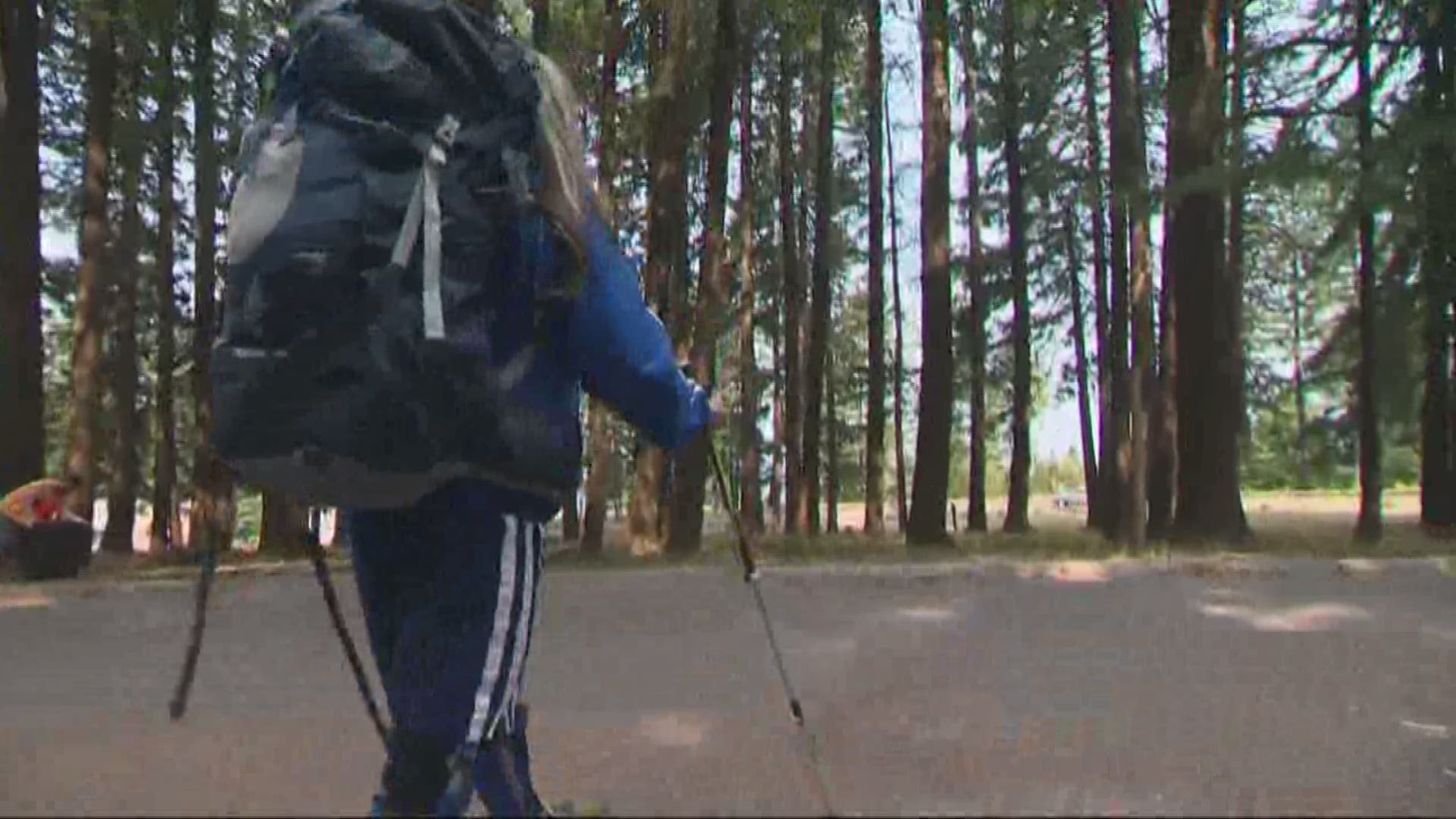 PORTLAND, Ore. – Stacey Kozel, who is paralyzed from the waist down, inspired viewers across the country after KGW and many other media outlets including CNN and ABC News covered her hike along the Pacific Crest Trail from Mexico to British Columbia.

But many in the Pacific Crest Trail hiking community say Kozel's story does not add up.

Kozel said she began her journey alone on March 28 and said she finished the 2,650-mile-long trail at the end of August (Kozel initially said she had finished in early September but later said she misspoke).

She used braces to support her legs, which are paralyzed due to lupus.

The 2017 PCT was one of the most difficult for hikers as snow in California and wildfires in the Northwest impeded trails. Some rivers were so high that hikers had to swim or wade in chest-deep water to cross them. Seven people died or are presumed dead on the trail this year.

Kozel said she stayed ahead of the fires in Oregon by hiking up to 30 miles a day and earlier this month saw the finish line: A monument on the border of Washington state and British Columbia, marking the Northern Terminus of the PCT.

“I was just happy to see that monument,” she recalls.

Kozel is now back in Ohio, where she lives. The PCT is the second remarkable hike she says she’s accomplished, after finishing the Appalachian Trail in 2016.

But after she said she finished the PCT, she received criticism from many hikers online who questioned whether she actually completed the through hike. Those questions escalated after Kozel’s story was shared by ABC News this week.

Following the criticism, Kozel took down both her Facebook page and website dedicated to her journey. On Friday, Sept. 22, she posted an explanation on Medium reiterating that she hiked the trail.

Some Pacific Crest Trail hikers questioned how Kozel could have completed the trail during such a difficult year. Some called her story a hoax.

Aaron Martinez lives near the PCT in Lake Isabella, California. He brings water to hikers in the arid desert. Martinez said there are many issues with Kozel's story.

Martinez said there is no evidence that Kozel signed any of the trail registries along the PCT. Most hikers use GPS data so loved ones can track their journeys online. Kozel never registered her GPS device for this purpose.

"It's a safety concern for me," she said. "I took precautions. There are other hikers that do that too."

Deanna Nelson hiked part of the Pacific Crest Trail in the Sierra Nevadas in July, one month after Kozel said she hiked the section. Nelson questions whether someone who wears braces could have made it through that region in such treacherous conditions.

"You go into the Sierras and it's 200 miles without a road. I had to cross rivers up to my knees two to three times a day, maybe five to six times up to my waist," Nelson said. "There's no bridges. Two girls died that summer in those rivers."

Kozel said she searched for safer passage on those treacherous rivers.

"You could pretty much try to walk up and down rivers looking for a safer crossing," she said.

Donna Saufley has been hosting PCT hikers for more than 20 years and is well-known in the hiking community. She said she never encountered a single person who met Kozel on the trail -- something that is extremely rare among the tight-knit hiking community.

"Someone with leg braces, reportedly paralyzed from the waist down, would -- by her own admission -- have a gait that hikers would notice," she said.

Kozel previously said she hikes about one mile an hour, but then said she hiked 30 days at a time in Washington state. Kozel has also changed her finish date, something Saufley said hikers would not do.

"Hikers know when they finished a trail. It's like your birthday or anniversary," she said.

Saufley said the hiking community is so incensed by Kozel's story because, if she did not complete the hike, it negates the journey many other hikers accomplished.

In addition, Kozel would have had issues with two of the models of braces she uses, made by Western Reserve Prosthetics. One pair costs $150,000 and is battery-operated, which allows the braces to help move Kozel's knees for her. The second is made of metal and plastic, and much harder for Kozel to maneuver, according to Western Reserve owner Rick Grope.

Kozel would have had to charge the batteries on the expensive braces every 36 hours or so, according to Grope, and the braces would have likely short-circuited if she forded a river.

Kozel told KGW she used the plastic and metal braces on her hike. Grope said that would have been difficult.

"She would spend so much of her energy to do that," he said. "I don't know why she wouldn't try it with the old ones."

Western Reserve covered the cost of Kozel's prosthetics after insurance. Grope said Kozel did not pay for either pair of prosthetics.

Despite the criticism, Kozel stands by her story although she cannot offer definitive proof that she completed the hike. She could not provide photos of herself on sections of the trail that were not within a day's hike of a road, particularly the well-known Forester Pass in California. Kozel said she did not have time to take a photo at that point, which is the highest peak on the trail.

The Pacific Crest Trail does not track hikers. Scott Wilkinson, marketing and communications director for the Pacific Crest Trail Association, explained that while many hikers sign log books along the trail, it’s not a requirement. Furthermore, the organization doesn’t track who signs the book. PCTA posts a list of people who report they completed the trail on its website, but that is based on the honor system. So far only a handful of people have contact the PCTA to report they completed the trail this year, although far more have likely finished at this point.

“It’s such a long trail and the fact that it takes months for people to do it – it passes through very remote areas – there’s no systematic or coordinated effort to track hikers,” Wilkinson said. “It would be difficult, bordering on impossible, to prove whether somebody finished.”

Kozel maintains that she finished the through hike and said the online attacks have been upsetting after such a significant accomplishment.

“There’s a lot of people that seem to be saying a lot of stuff, and people that are saying stuff weren’t even on the trail,” she said. “It’s very hurtful.”

Kozel said she shared her story to help other people reach their goals and the online attacks marred what she intended to be a positive message.

“It’s been hard for me to share my story. I’m a pretty private person,” she said. “I felt like I wanted to help other people who might be going through something. I don’t want people to give up. It seems like people are taking away my integrity and changing the story in a way that it won’t help people.”

Kozel said she’s most upset by how others may interpret her journey now that it’s been questioned publicly.

“I’ve met so many people along the way and they kept me going out there on the tougher days,” She said. “It’s sad to me that people might feel like I let them down because of this negativity. That’s what hurts the most.”