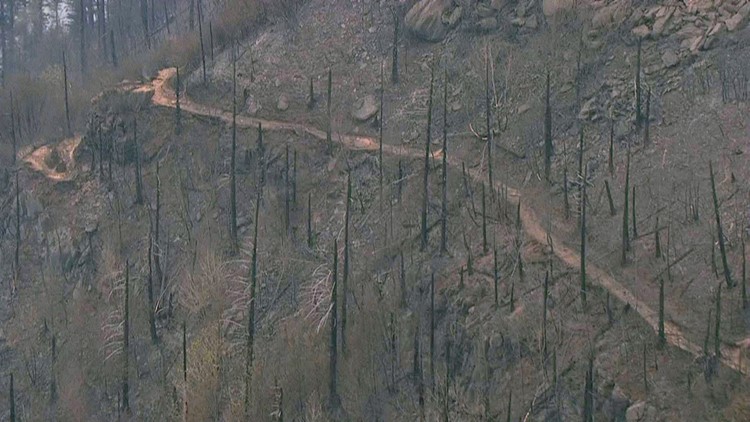 A trail in the Columbia River Gorge, believed to be near the top of the Angel's Rest Trail, after it was burned by the Eagle Creek Fire. (Photo: Pat Dooris, KGW)

TROUTDALE, Ore. — Hiking trails affected by an Oregon wildfire in the Columbia River Gorge might be closed for months, authorities said Monday.

The fire in the Columbia River Gorge has displaced hundreds of residents, shut down Interstate 84 and burned 52 square miles (134 square kilometers) since it started over the Labor Day weekend in one of Oregon's most treasured natural places.

Eastbound lanes of I-84 will remain closed another week and officials on Sunday expanded the trail closures to all recreation areas.

It's too early to fully assess the damage elsewhere, but many other popular hikes use trails that were in the middle of the blaze, including Eagle Creek, Wahclella Falls, Munra Point, Larch Mountain, Oneonta Gorge and Horsetail Falls.

The fire was started on the Eagle Creek trail by a 15-year-old boy who tossed fireworks into the woods, authorities have said, and initially trapped 150 hikers in the area overnight.

"It would be futile to do any sort of trail work before the winter," Stender told the newspaper.

"Trails aren't going to be accessible for months, and it's safe to say until spring."

Still, the fire has only impacted about 10 percent of the entire national scenic area and it's easy to forget there are other places to hike, including on the Washington state side of the Columbia River, said Kevin Gorman, executive director of Friends of the Columbia Gorge.

"We've tried not to push it," he said in a phone interview. "Hood River is feeling now under threat and there are communities that are still feeling the risk of fire."