'I was disappointed and upset': Clark County neighbors frustrated with political sign theft

Several neighbors in a Vancouver retirement community were among those hit by sign thieves. 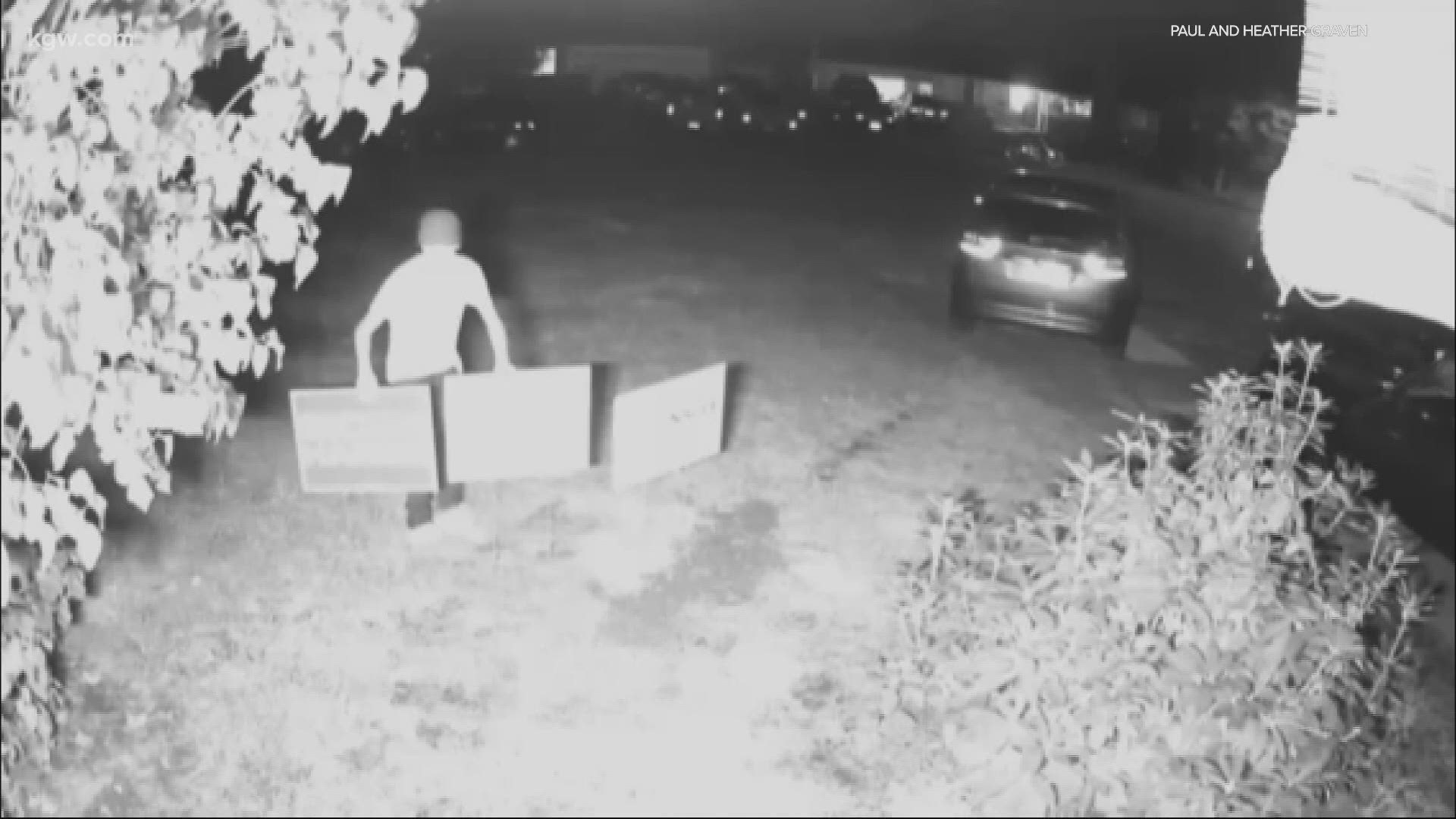 On Monday night, Heather Graven caught a man on camera stealing her family's Joe Biden Kamala Harris signs outside their home in Orchards.

“This is the second time it’s happened to us,” said Graven. “It’s so frustrating, this is our property and they don’t have the right to do this.”

Graven said someone stole their first Biden Harris sign from their yard last week, during the vice presidential debate.

In east Vancouver, there's an empty spot on Gertrude Stephens’ front lawn, where she said someone stole her Biden Harris sign, Sunday morning.

“It upsets me very much,” said Stephens. “I have never been a political person so this is new for me this year."

In Washington, stealing political signs is a misdemeanor. Stephens said at least five of her neighbors had signs stolen from their homes in Fairway Village, a retirement community. She reported her theft to police and alerted neighbors including Sue Hirai. Someone stole her sign, as well.

Getting lots of complaints about stolen political signs. This happened tonight in the Sifton neighborhood in Orchards. Second time this family’s Biden/Harris signs were stolen. Both Clark County GOP and Democratic HQs say many people are asking for replacement signs. pic.twitter.com/KLMfTdR6vn

“I was just surprised but I guess that's the climate these days,” said Hirai.

Besides losing her political sign Hirai and other neighbors found a note on their doors.

“It was a two-page rant and I was really upset because it starts out with ‘As your fellow neighbor,’" said Hirai.

The author wrote, "I am truly fascinated that you are choosing a candidate that will probably die very soon," then went on to criticize Biden and Harris. It's unclear if the person who left the notes also stole the signs.

“I was disappointed and upset,” said Hirai. “I felt a little harassed.”

The neighbors bought new signs from the Clark County Democrats which is selling them as a fundraiser for $20 each. Chair John Oberg estimated that 50 to 75 people have come by their office over the last month, needing replacement signs after theirs were stolen.

“Let's do what we learned in kindergarten and leave everybody's signs alone," suggested Oberg.

The Clark County Republicans’ co-office manager Anna Miller said they've been dealing with their own sign theft issues. She estimated that two to three people a day have come by for replacement signs for Republican candidates. Miller called sign-stealing a “violation of a person's private property and free speech,” no matter who they're voting for.

“It's disparaging for all of us," said Miller. "No one should touch the signs."

Stephens placed her new Biden Harris sign in her window so she wouldn’t lose it, too.

“I wish that these things weren't happening,” she said.

Washington voters should soon have their General Election ballots. The Secretary of State's office said Monday that they would be mailing them to registered voters no later than October 16.