'Like you were in a war zone': Neighbors alert each other to large fire in Wilsonville

Tualatin Valley Fire & Rescue said the blaze went from a one-alarm fire to a three-alarm fire in a matter of minutes. 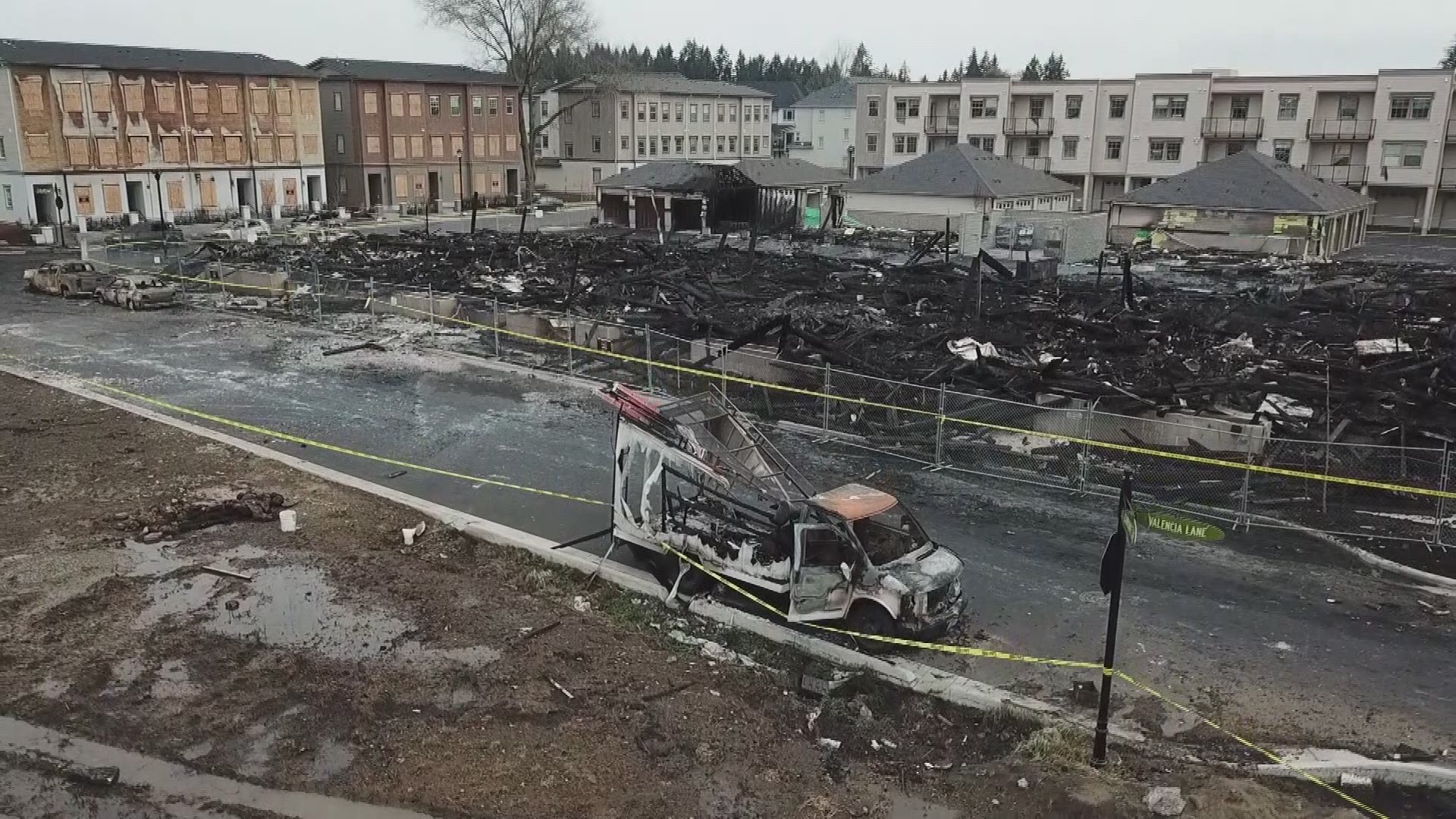 WILSONVILLE, Ore. — Multiple families are out of a home in Willsonville as officials search for what caused a fire at a construction site that spread to nearby condos early Sunday morning.

No one was injured, according to Tualatin Valley Fire and Rescue. Many people who spoke to KGW credit that safety not only to first responders, but to the action of their neighbors who helped each other get out.

The fire started at a construction site where community members tell us condominiums were being built. It wasn't occupied at the time, but nearby homes were.

"In this area there are a lot of multi-family homes, via condominiums or row homes that are closely placed together. So, it’s a pretty densely populated area," Tualatin Valley Fire and Rescue Chief Cassandra Ulven said.

Fire crews boarded up windows and put out hot spots Sunday as the Villebois community stood by, stunned at the destruction.

"It's like you were in a war zone," Tina Cernitz said.

Just one row of homes stands between Cernitz’s condo and the fire. Unlike about 20 of her neighbors, she will be able to return to her home, but she’s still shocked by what happened right outside her doorstep.

"I’ve never seen a fire as massive as that was," she said.

Kevin Howard lives near Cernitz and was also able to return to his home.

"I opened my window, looked out and I saw was this ginormous fire ball," Howard said. "I could feel the heat on the window."

Tualatin Valley Fire & Rescue saud flames shot up as high as 100 feet into the air and witnesses told KGW they could see the flames miles away.

The heat from the fire enveloped parked vehicles, melted streetlights and destroyed homes.

James Brown lost the home he and his husband shared with their two dogs.

"My whole third floor is gone, and I guess everything from the third floor came down to the second floor. So, all that's gone," Brown said. "Then the whole bottom, the first floor is just flooded."

The first started around 1 a.m., while many were sleeping. However, many were able to get out, even before firefighters arrived, because of neighbors who sprung into action.

"Everybody was really lucky that he actually went around and knocked on the doors and was running around in his bathrobe," Brown said.

Others did the same. Some even drove around the neighborhood honking their horns to wake up their neighbors and alert them of the fire.

Gary Dowen lives just a couple homes down from Brown and and told KGW he is thankful for his community.

"It means everything," he said.

His house was mostly spared, aside from some blown out windows and melted siding. His neighbors were not as lucky.

"I just wish that a couple of our neighbors that did get hit pretty hard, I wish they'd have come out better," Dowen said.

In addition to the 20 homes that are no longer livable, a construction shack, some construction equipment and about 14 cars and trucks were destroyed, according to fire officials.

A GoFundMe page has been set up to help the fire victims. You can donate here.

The Clackamas County Sheriff’s Office Detective Division is working with Tualatin Valley Fire and Rescue personnel and an Oregon State Police Investigator to determine the cause of this fire.

They are asking the public, specifically those who live in the area or happen to have been in the area at the onset of the fire to contact the Clackamas County Sheriff’s Office tip line if you recall anything suspicious.

Anyone who saw something suspicious or has surveillance footage of someone or something suspicious is urged to call the Clackamas County Sheriff’s Office Non-Emergency Line at 503-655-8211 or leave a tip at https://web3.clackamas.us/contact/tip.jsp. Please reference CCSO Case # 19-007264.