City: Fatal police shooting, most other calls, not a good fit for Portland Street Response

In order for dispatchers to send Portland Street Response, the person in question has to, among other things, be possibly experiencing a mental health crisis. 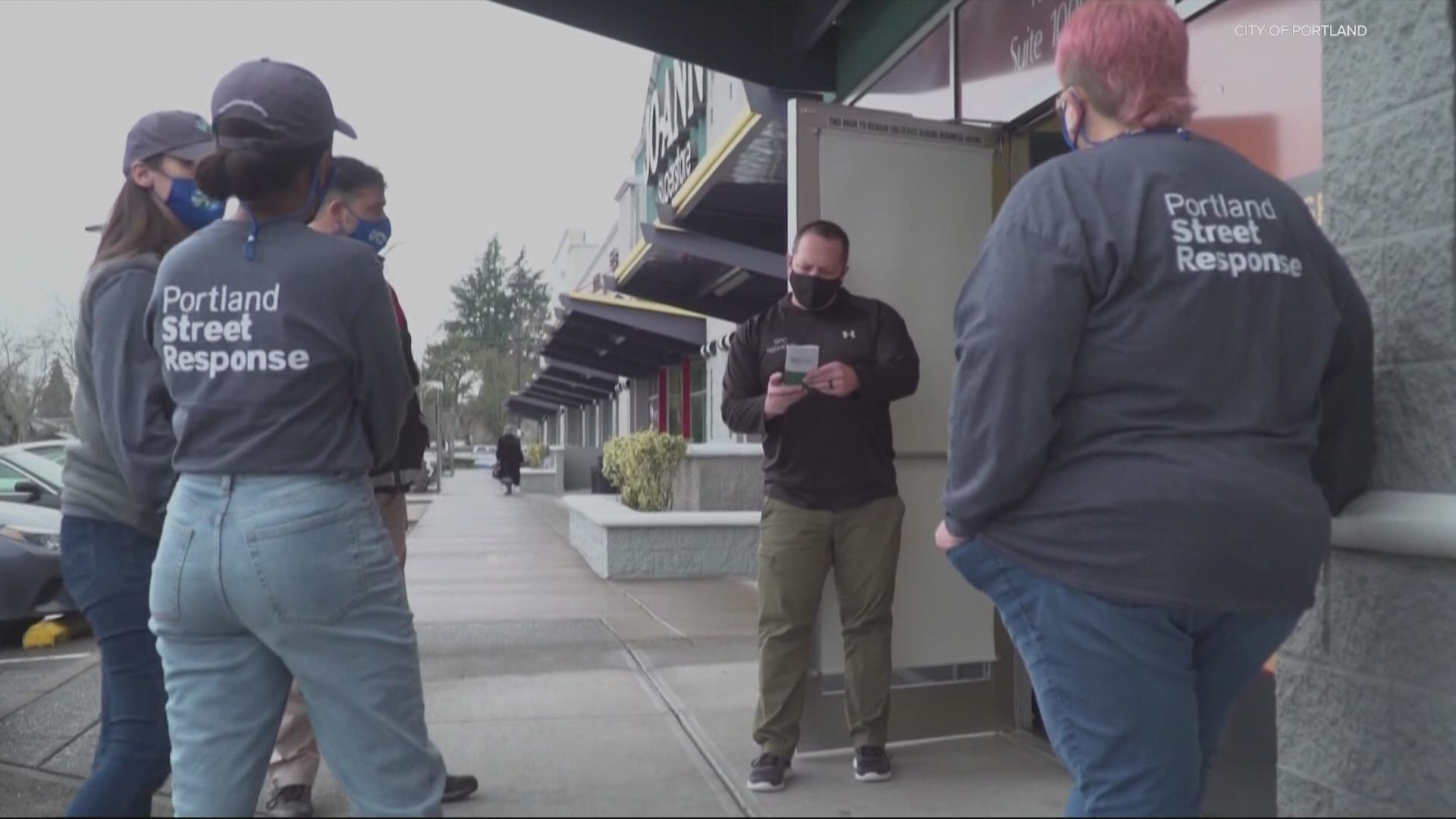 PORTLAND, Ore. — In the wake of Friday’s fatal police shooting in Southeast Portland’s Lents neighborhood, heads of a new, alternative first response program say they’ll be reviewing the details of that initial 911 call to see if their staff should have been dispatched instead of or alongside officers.

For now, reps for Portland Street Response (PSR) agree with the city’s Bureau of Emergency Communications (BOEC) and the Portland Police Bureau (PPB): that callers’ assertions that the man in question was armed left emergency dispatchers with no other choice but to send police.

“We appreciate the community’s concerns because we have consistently heard from you that PSR needs to be flexible in its response model,” read a statement released by Portland Street Response Monday evening. “We will be debriefing this incident as a team and citywide to learn how PSR can improve its interventions.”

After years of buildup, the city launched PSR in February, with a price-tag of $4.5 million. The program gives dispatchers the option of sending an EMT and a crisis counselor to calls involving mental health or addiction. The program is set to go citywide next year, but for now, it's only responding to calls in the Lents neighborhood, where Friday's shooting happened.

Around 9:30 a.m. Friday, police were called to Lents Park after callers reported a man pointing a gun there. Officers responded and found 46-year-old Robert Delgado. A rep for the bureau said Delgado appeared to be armed. They now say he was holding a replica gun. Witnesses have said they didn’t see any gun at all. The case is under investigation.

Delgado was reportedly homeless and long afraid of police. By Monday, a memorial of flowers and balloons had appeared in his honor.

“It was very jarring to hear of what happened,” said Sabina Urdes, chair of the Lents Neighborhood Association.

In an interview Monday, Urdes said she’s heard the rationale for why PSR wasn’t dispatched to Friday’s call, but she wonders if all the agencies involved could have been more flexible.

“It's just kind of hard to understand why the police response wasn’t such where they couldn't deescalate to the point where they could bring in Street Response to talk to that person [and] why so quickly they resorted to shooting and killing,” she said.

The frustration is compounded by, coincidentally, well-timed reporting. Two days before the shooting, Willamette Week reported PSR has only been going out on “about two calls a day." Staff on the program told reporter Tess Riski they could handle four to five times that.

“I understand there to be a few different reasons behind the call volume. One of the first arguments of course is ‘This is a new program, so we're trying to roll things out slowly and do it right,’” Riski said. “But another thing I've heard is that there's a specific triaged criteria that has to be met.”

KGW confirmed that criteria with Portland's Bureau of Emergency Communications. In order for dispatchers to send Portland Street Response, the person in question has to, among other things, be possibly experiencing a mental health crisis, intoxicated or on drugs. They have to be outside or in a public space. They can't have any weapons or be behaving violently, and they can't be obstructing traffic.

A spokesman for BOEC said dispatchers are sending PSR to every call that qualifies, and reps for PSR told KGW they don’t turn down any calls sent their way.

No one seems to know why there are so few that meet the criteria for the new program.

KGW reached out to city commissioner Jo Ann Hardesty, who’s overseeing PSR. A spokesman for her office sent KGW a response tied to Friday’s shooting, but it mentioned nothing about PSR’s overall low call volume. The statement read “I send my deepest condolences to the family, friends, and community members grieving the tragic loss of Robert Douglas Delgado. I will be taking the time needed to learn all the facts and to fully debrief the fatal police shooting at Lents Park. I will not be commenting further until I have more information.”

People in Lents tell Riski they're frustrated, especially knowing the money for Portland Street Response was cut from the Portland Police Bureau's budget.

“Neighbors in that neighborhood have a lot of different opinions over the rule of law enforcement versus alternative options,” Riski said. “Some of them feel like police don't respond to them quickly.”

In that statement Monday, PSR staff wrote they’re meeting with BOEC weekly to discuss how to grow their impact.

“Our next phase starts this summer and we will bring on more team members to help cover the greater Lents neighborhood on nights and weekends as well,” the statement read. “Ultimately, we will bring this service to all of Portland, 24/7, in 2022.”