Oregon State University plans to build in the tsunami zone, but officials say its designs will actually survive the quake and save lives. 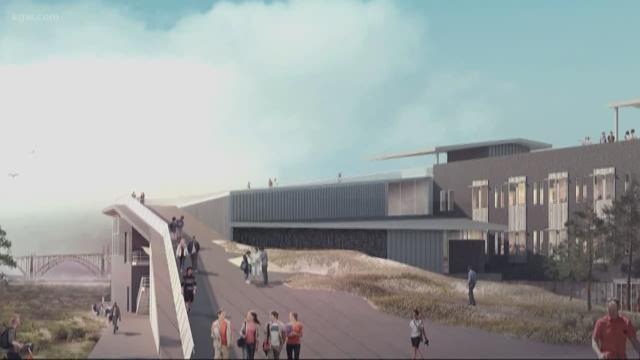 NEWPORT, Ore. -- A potential mega-earthquake could shake the Pacific Northwest and send a giant wave of water to the coast.

Oregon State University plans to build in the tsunami zone, but officials say its designs will actually survive the quake and save lives.

Most people visiting the coast have heard the stories.

“The tsunami possibility. It is pretty scary,” said Holly Pennock from St Helens.

Many people have thought about what it would be like to feel the ground shake and to know a wall of water is on the way.

“If I felt the ground shaking my thought would be to head inland, and probably join the line of traffic,” said Nicole Hatfield from Portland.

There are ways out and away from the danger of tsunami. There are signs pointing the way all along the coast.

Oregon State University will be building in the tsunami zone in Newport, but the plan is for the new marine studies building to withstand the earthquake and be a way to safety.

Cowen says the $50 million expansion will be a way for students to explore habitats from estuaries to the deep ocean. It will also be built with an extensive foundation, and have one of the few vertical evacuation sites in the country. A ramp will lead 47 feet up, and be able to hold 900 people.

“The whole building is designed to be as stable and secure as possible on the seismic side of it,” said Cowen.

Cowen says the construction of a building with state of the art engineering will not be easy, but it could be a solution to a major problem.

“One possibility is to abandon the coast,” said Cowen. “You can't do that. We live by the coast. The best thing to do is find a solution to help us through those circumstances.”

People we talked to are glad more options for escape will exist on the coast.

OSU plans to break ground in the spring of 2018. They will also begin construction of a residence hall. That will be built outside of the tsunami zone.