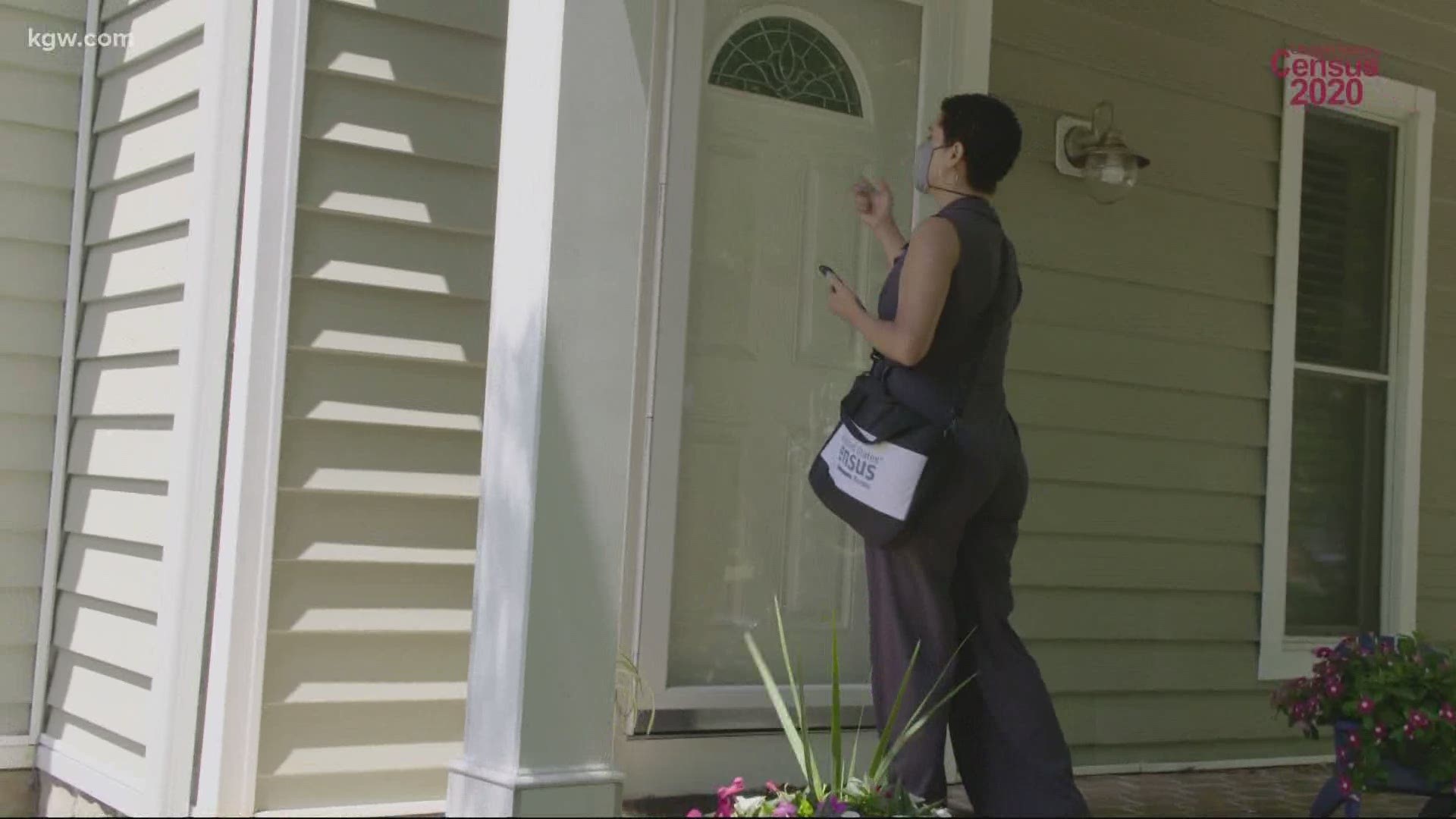 PORTLAND, Oregon — America's once-in-a-decade Census looks different this year, but the impact will be the same. If you haven't responded yet, expect a census taker to knock on your door soon.

Because of COVID-19 the deadline to wrap up the 2020 count nationally was pushed out to the end of October. But last week the U.S. Census Bureau announced they'll end a month earlier, on September 30.

That includes the biggest task: enumerators, or census takers, knocking on the doors of people who haven't responded. They have already started in every Oregon county.

They started in 34 counties on July 30, and then hit the pavement in Clackamas and Multnomah counties this past weekend. The local U.S. Census Bureau office says its operational timeline was always subject to change depending on federal, state, local and tribal authorities' guidance to safely re-start operations.

Census takers will visit your house up to six times and leave a flyer if you don't come to the door asking you to complete the Census online, over the phone or by mail. Census takers wear a badge with a U.S. Department of Commerce watermark and expiration date - as well as a mask. They must stay physically distanced and use hand sanitizer frequently.

"They'll come knock on your door, stand 6-feet back and they will ask you to respond to the census that way," U.S. Census Bureau Media Specialist Misty Slater said.

With the tighter deadline, census takers have to speed it up - safely - while making sure they get a complete and accurate count. Many people are concerned that won't happen.

Results from the Census shape the future of your community and there's a lot at stake if people are undercounted.

"If you don't get counted you're really doing a disservice to your community because they don't get that money for the next 10 years," Slater said.

Don't just take it from her; take it from organizations helping migrant farmworkers and Latinx immigrants in rural Oregon, who are often undercounted and underrepresented in the Census. They are part of a campaign called We Count Oregon, which has been working toward getting people to fill out the Census.

"If we aren’t counted that's less money we will get for our schools, less money for child care, less money for anything health-related. All those things are at stake," Centro de Servicios Para Campesinos Executive Director Debbie D. Cabrales said.

"We have to continue emphasizing and bringing importance that they should fill it out as soon as possible and remind people there is no citizenship question on this Census. This information is confidential,"  Causa Oregon Census Equity Manager Fabian Guerrero said.

COVID-19 changed how We Count Oregon reaches hard-to-count Oregonians, particularly those in rural areas, non-English speaking immigrants and migrant farmworkers, many of whom lack access to WiFi.

Centro de Servicios Para Campesinos was a Census Assistance Center, meant to be a one-stop-shop to help people who didn't have access to a computer or internet so they could fill out the Census. But when the pandemic hit, they had to close.

RELATED: Financial relief coming for agricultural workers in Oregon who are self-quarantining

"They have a language card so the household respondent can pick out what language it is they speak and they can request a census taker come to their house that speaks their language if we have one available," Slater said.

Drop a pandemic on top of fears over the government knocking on people's doors and census takers have their work cut out for them.

"It becomes that fear most likely our community members aren't going to be opening a door for anybody who is just randomly showing up," Cabrales said.

So the message is: if you haven't responded and don't want a census taker knocking on your door, now is the time to self-respond online, over the phone, or by mail.

Oregon is ahead of the game with households responding at higher rates than the national average; as of August 9, Oregon ranked 19th in the nation with a 65.8% response rate.