Two people were arrested Monday on the Capitol campus, including a man who was also responsible for breaching the Capitol grounds last Wednesday, WSP said. 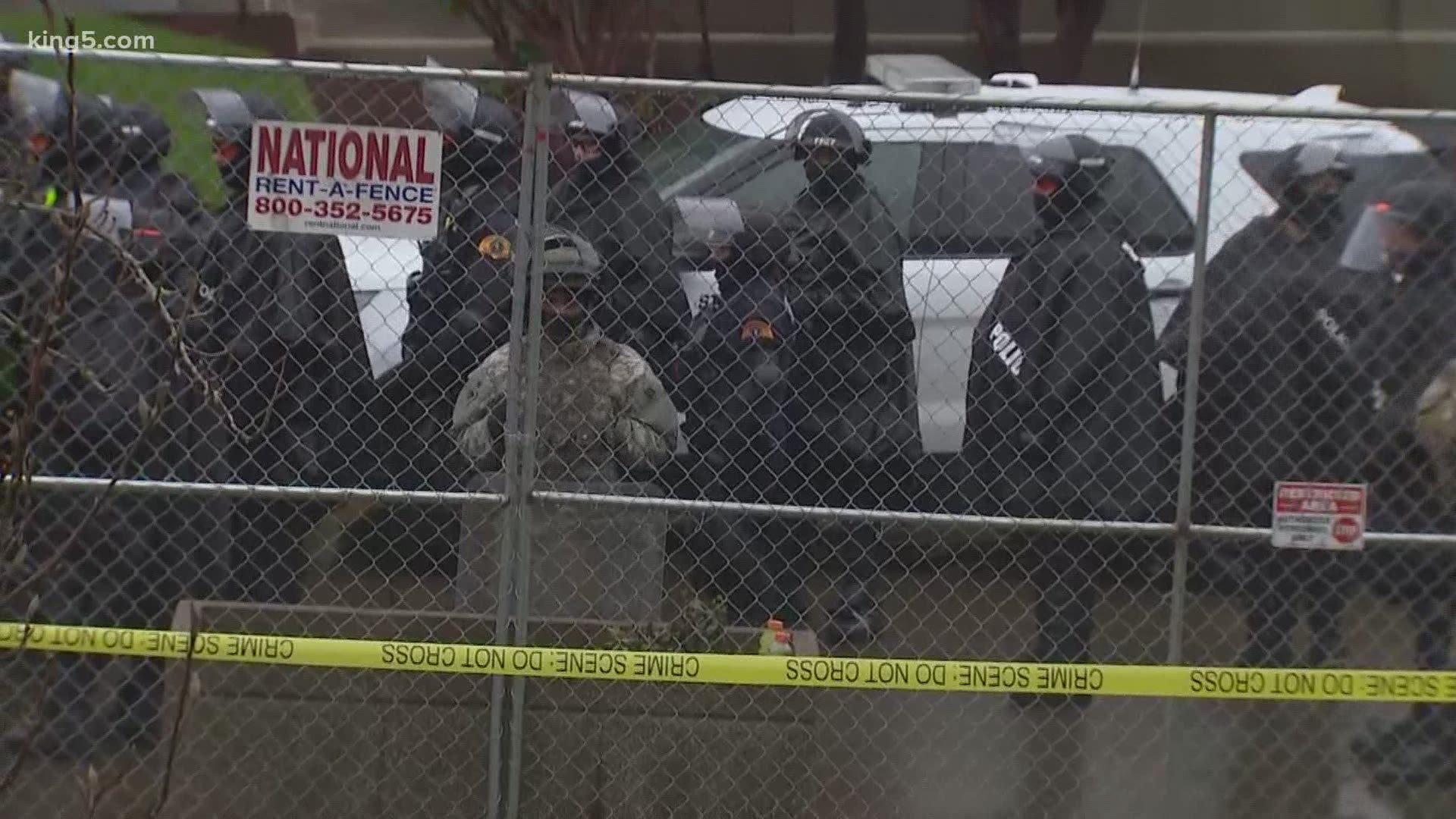 OLYMPIA, Wash. — Lawmakers were able to convene safely at the state's Capitol in Olympia Monday for the start of the legislative session. There were limited interruptions from protesters due to a large number of National Guard members and state troopers on the grounds.

Two people were arrested Monday morning on the Capitol campus, including a man who was also responsible for breaching the Capitol grounds last Wednesday, according to Washington State Patrol (WSP).

Around 8:30 a.m., WSP tweeted that a woman was arrested after using an RV to block a roadway. The WSP said the female driver refused to leave and was taken into custody.

"This situation created a security concern and was dealt with appropriately," state patrol tweeted.

Several other people were in the RV at the time and chose to leave when asked, according to the state patrol.

The WSP tweeted around 11 a.m. that another man was arrested on the campus for “failure to comply with a lawful order” after attempting to enter the restricted area.

In a press conference Monday afternoon, WSP officials said the 30-year-old man, from Everett, who was arrested has also been determined to be one of the people who breached the campus grounds last week. WSP said the man will be charged with criminal trespass.

According to the state patrol, this 30-year-old man who was arrested this morning on the Olympia Capitol grounds was one of the 100+ people who trespassed on the governor’s executive mansion property last week. #waleg pic.twitter.com/o1UKMlwN26

The National Guard members and state troopers will remain at the Capitol at least overnight.

“We do have intelligence that there are groups that will be coming to the campus either tonight or meeting nearby the campus that still may offer some level of threat to the situation, so we are going to be here until we know all level threats are resolved," said Chris Loftis with WSP during the afternoon briefing.

Loftis said they will reassess how long the heightened security measures will continue, now that state lawmakers have passed laws to have the rest of the legislative session virtually.

"The building will soon be quiet again and we are glad about that because we are hoping that will mean that the people who have indicated they were going to come and harm the building, or the people inside, or the processes, there will be nothing to harm other than the building, and we will continue to protect it as a symbol of our freedoms and our democracy," Loftis said.

The new security measures at the state Capitol in Olympia are in place in response to riots at the U.S. Capitol in Washington, D.C., and the governor's mansion being breached.

Fences were put in place at the Capitol around the statehouse and up to the legislative buildings on Friday in preparation for the start of the legislative session Monday.

WSP tightened security around the Capitol over the weekend after Gov. Jay Inslee on Friday activated 750 Washington State National Guard members and a "large" number of state troopers to help protect the Capitol campus.

The WSP said the response is the largest on the Capitol campus in the state's history and it serves two purposes, for protection but also to send a message about democracy. 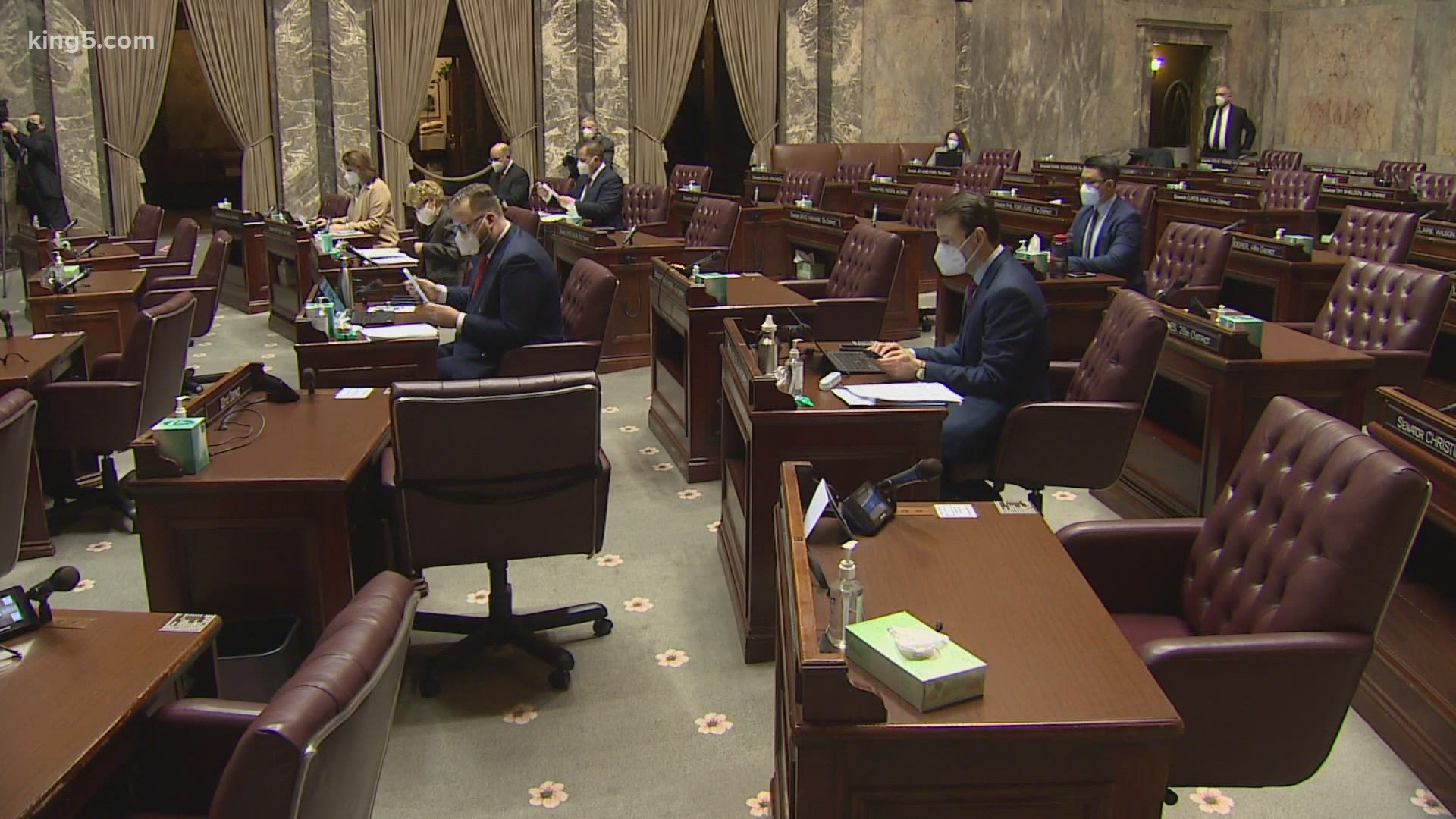