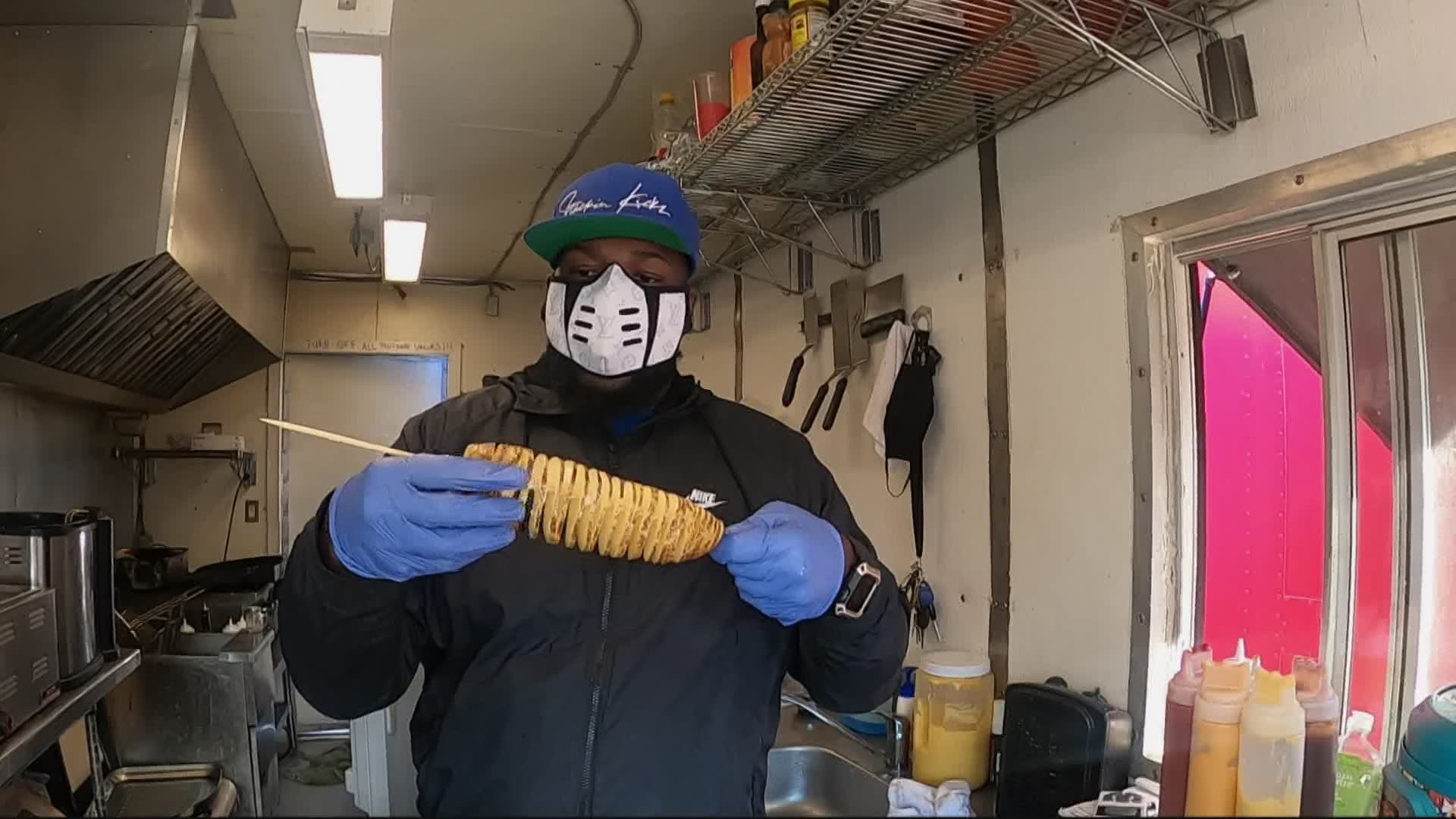 PORTLAND, Ore. — Black Restaurant Week is stopping in the Portland area for the first time.

Its mission: to showcase the flavors of diverse cultures and save the Black-owned restaurant industry during the pandemic.

Black Restaurant Week LLC is a marketing awareness campaign that highlights hidden gems and well-known food establishments in the community, allowing them to showcase their cuisines.

Isaiah Bostic, owner of Batter on Deck food cart on Northeast 157th Avenue and Northeast Glisan Street, jumped at the chance to join Portland's first Black Restaurant Week. It's giving him, and so many others, a needed boost in a tough time.

"I signed up right away! I told them definitely," Bostic added.

Bostic has already seen the results of publicity from Black Restaurant Week pay off. When our KGW crew was out at the food truck to interview him, there was a line before they'd even opened.

"This is my first time ever coming," Alana Denmon told KGW as she waited for her order from Batter on Deck. "It's amazing - African American people doing what they need to do, like he's doing. It's a great cause, great food is what I hear. So super excited to support it."

"There's a lot of different flavors within the African diaspora so you have Jamaican food, you have Nigerian food, Ghanaian, so many different flavors we want to highlight and expand the palette for those individuals," Black Restaurant Week LLC co-founder Derek Robinson said.

Rose City Eats in the Vancouver Mall, which whips up a range of comfort food, is also taking part in Black Restaurant Week, thanks to Bostic letting the owners know about it.

"This is major! I feel like it should be more than a week," Rose City Eats co-owner Jante Moten-Stewart said. "When you come see us it's not only like you get amazing food, but good-spirited people, to where it breaks that judgment on what people perceive us as, as a Black community."

Black restaurant owners say they face systemic barriers and disparities, only widened during the pandemic.

"As far as people that grew up in my community, a lot of people don't have insight," Bostic said. "There's a lot of people rising up from those things that held us back and breaking those chains."

"We just don't get the resources and funding to help us keep going, honestly," Rose City Eats co-owner Ryan Stewart added. "Growing up in the community I grew up in there wasn’t a lot of business-savvy people that owned their own restaurants or let alone owned their own house."

Because many businesses don't have money for marketing and public relations, Black Restaurant Week gives them a platform.

"Gives us more exposure, gives us the exposure we kind of lack in our community. Pretty much we're all word of mouth," Stewart added.

The national campaign pivoted during the pandemic, focusing on reviving and saving Black businesses. Their theme this year is 'No Crumb Left Behind' and they waived their participation fee this year so more businesses could take part.

Restaurant owners say the campaign could give them the boost they need to keep their doors open.

Black Restaurant Week ends Sunday but local businesses participating want you to support them well beyond this week!

You can check out a full list of places in the Northwest taking part at BlackRestaurantWeeks.com. There's still time for other restaurants to sign up, too.