Elisabeth Anderson-Sierra of Beaverton just shipped the largest-ever donation of breast milk to that community, and she's just getting started. 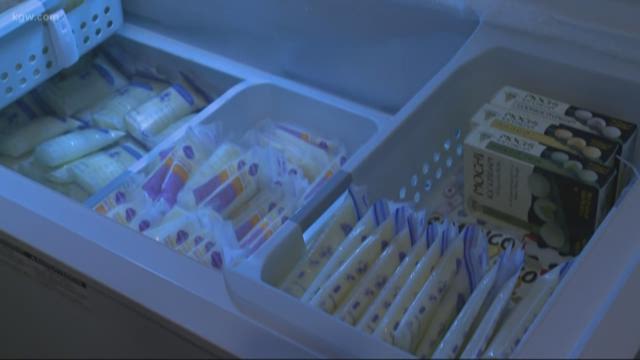 BEAVERTON, Ore. -- It's been four months since Hurricane Maria hit Puerto Rico. And today, 40 percent of the island is still without power.

It's been devastating. And for breast feeding mothers it's meant no power for pumping devices and no refrigeration to keep milk. Many babies have gone without and had to switch to formula. But Elisabeth Anderson-Sierra, of Beaverton, just shipped the largest-ever donation of breast milk to that community, and she's just getting started.

Six times a day. Every single day. For three years. Never a break. And there have been tears because of the ball and chain known as a breast pump.

"Save all the milk! It's liquid gold for a reason, we work really hard for it!" Anderson-Sierra said.

When her first daughter, Isabella, was born three years ago, she couldn't figure out why she was having to pump so frequently. She never felt empty. Soon her doctor diagnosed her with hyperlactation syndrome. It means, in her case, she makes three times as much milk as her daughter would ever drink in a day. So she's frozen it. Her kitchen freezer has no food in it, it's full of 5-ounce bags of frozen milk. In her garage sits a 5-foot-long deep freezer. It's full to the brim with more milk, all dated and measured.

Since day one, she's donated to breast milk banks in Oregon and California. It's given to premature and medically fragile babies, or those whose mothers don't make enough and can't handle formula. Just like giving blood, Anderson-Sierra herself and every batch of milk she donates is rigorously tested.

Anderson-Sierra became affectionately known as the Milk Goddess and started her Facebook page called "One Ounce at a Time". She's been featured in magazines, and TV interviews because of her incredible donation rate. The current Guinness Book of World Records holder for largest donor of breast milk sits at 53,081 ounces given. Anderson-Sierra has more than doubled that, at 120,000 ounces, or 937 gallons so far. The Guinness people are waiting until Anderson-Sierra weans off breast feeding so they can get an accurate count before she takes the title.

Her husband, David Sierra, is Puerto Rican and when Hurricane Maria hit in September, they heard stories of breast milk going bad without refrigeration and moms unable to find electricity to pump. Anderson-Sierra packed up coolers full of her milk and sent it down to family to get distributed to babies in need. Soon, she got word they found the perfect recipient.

"It had gone to a widower with a three month old son," she said. "His name is Joaquin, he's adorable and I want to just hug him."

Joaquin was born a month premature. His mother died during childbirth right after the hurricane hit. Joaquin didn't have his mom's milk, he wasn't tolerating formula and his dad had been using their life savings to fly breast milk in from donor banks. Now, they have Elisabeth Anderson-Sierra, who is ecstatic to help.

"I want to hopefully get his son to a year on breast milk. I know that's what the mom would have wanted, and I know that's what she would have done and I'm doing everything possible to fulfill her wishes." But packing up the milk and shipping it overnight to Puerto Rico costs several hundred dollars per cooler. Recipients like Joaquin's dad also need a stable place to store the frozen milk, with a generator so it won't spoil during intermittent power outages. That's why Anderson-Sierra started a YouCaring page to raise money. Her goal is set at $10,000. She says it's set up to be a direct deposit to Joaquin's dad to help pay for the donations.

Anderson-Sierra says it's not easy mentally to keep up the pumping. She's missed a lot of family time having to spend six hours a day tied to the machine. And it's not cheap either, buying all the supplies. But it's a mother's gift to share what her daughters have with kids around the world.

"I love hearing these stories and seeing where milk is going and pictures of the babies drinking it," says Anderson-Sierra. "It's very rewarding and one thing to push me to continue."

She has just been approved to become a surrogate mother and plans to continue donating her excess breast milk. Anderson-Sierra has a big aspiration to share her story with Ellen DeGeneres in hopes to get the word out about donating and sharing milk with kids in need.