The confrontation between the armed student and Keanon Lowe occurred inside the Northeast Portland school after the student entered a classroom. 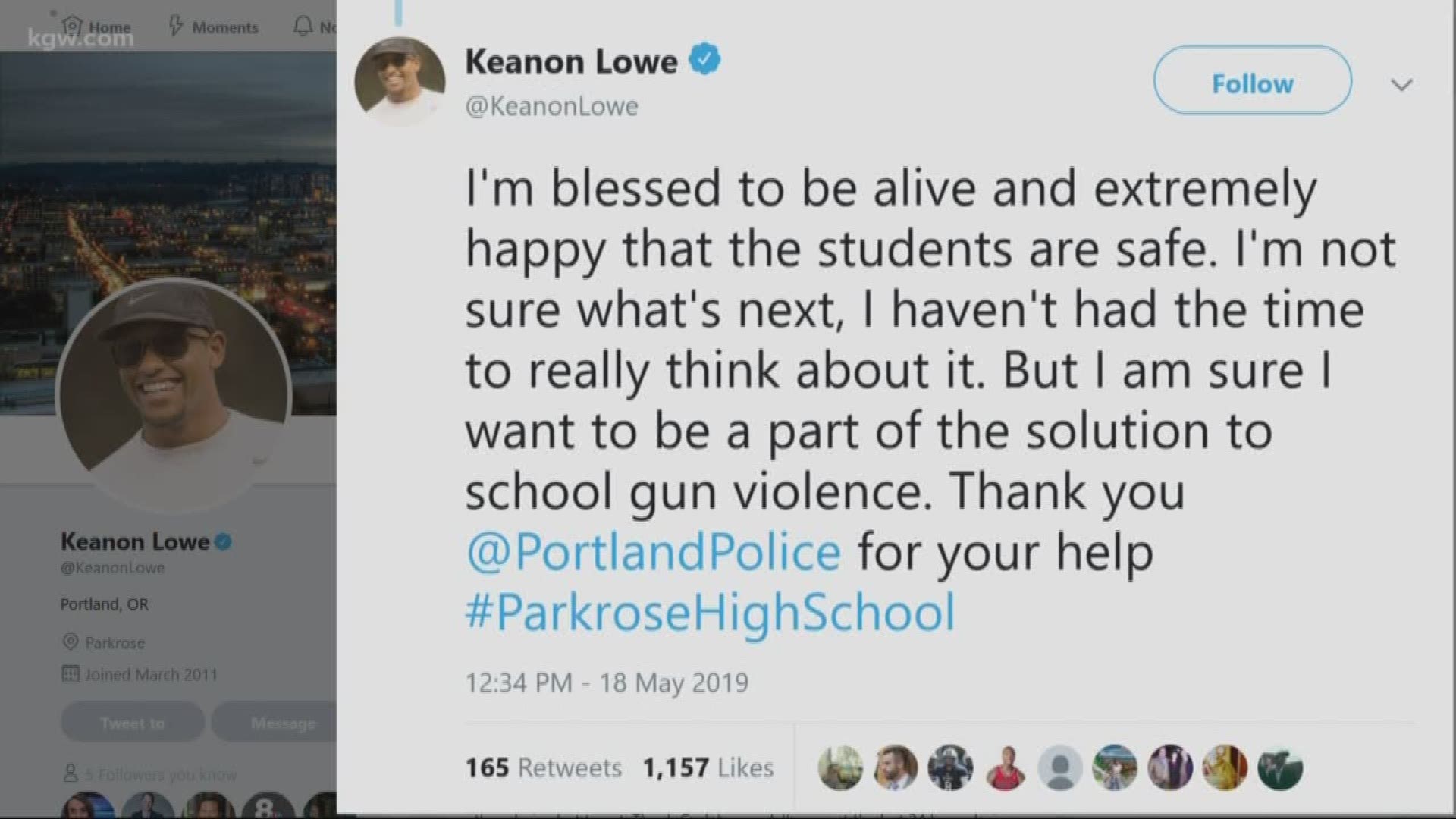 PORTLAND, Ore. — A student who arrived at Parkrose High School armed with a shotgun is in custody after the school's football coach, former University of Oregon football player Keanon Lowe, tackled him and wrestled him to the ground, according to witnesses.

No one was injured. Officers responded to the school at 11:48 a.m. Friday.

Credit: Multnomah County Sheriff's Office
Angel Granados-Diaz, 19, is accused of bringing a shotgun into Parkrose High School on May 17, 2019.

The suspect's ex-girlfriend told KGW's Kyle Iboshi he texted her saying he'd be late for school. Roughly 40 minutes later, he showed up with a gun, she said.

"Our security staff responded and found the student with a gun and quickly disarmed the student. Thanks to their heroic efforts all students and staff are safe," Lopes-Serrao said in a letter sent Friday night.

The confrontation between Granados-Diaz and Lowe, who is also a security guard at the Northeast Portland school, occurred inside the school after the student entered a classroom, police said. Officers initially said the encounter happened near the school's tennis courts.

“He was trying to cock his gun, then the security guard tried to fight him," one student said. "We all just ran out of the classroom because we saw the gun and our substitute teacher was telling us to run. When you’re in a situation like that the adrenaline kicks in."

In a series of tweets Saturday afternoon, Lowe said he had no choice but to act and is grateful no one was hurt.

Students said they hid in closets, theater makeup rooms, or ran away from school.

Officers recovered the gun at the scene. Police have not said whether shots were fired.

A parent told The Oregonian students said the suspect intended to use the gun to harm himself.

Parkrose High School was placed into lockdown while police methodically searched the buildings.

At a 1:30 p.m. news conference, a Portland police spokesman said the school was clear.

Nearby Parkrose Middle School was placed in lockout as a precaution. That lockout was lifted at 2:30 p.m. The school was released at its normal time.

Students were reunited with their parents at a nearby abandoned Sears outlet store parking lot, located at Northeast Sandy Boulevard and 122nd Avenue. Officers began escorting students to a line of school buses at around 1:15 p.m.

"That was the worst feeling ever in the world," said one parent. "I'm probably going to cry. I called in sick to work...because we just want to stay home with our kids tonight. Hold them and be happy they're still here."

In his letter, superintendent Lopes-Serrao said the student will not return to the school.

School will resume as usual on Monday. There will be additional counseling for students and staff throughout the week, as well as an increased security presence.

"This was a difficult day for students, staff and our community. We are Parkrose Strong and showed that strength today," Lopes-Serrao said.